Muslim Women Are Breaking Through Sporting Barriers And Pushing For More

In the last few years sports brand Nike has reached out to Muslim women and women from the Middle East, rounded off with the release of the Nike Pro Hijab. And while it has received mixed responses, its impact in opening access to sport may be much wider than first thought.

Muslim women have been having a very difficult time determining themselves as professional sports women – breaking down cultural barriers, finding the capability to train and fighting prejudice against their hijab. Now in the wake of a possible sea change as the Federation of International Basketball Association (FIBA) revise their rules on wearing headscarves during games, The Iranian speaks to three women and their civil society allies on the obstacles facing Arab women who wear the hijab in sport.

Rabab Abdullahi is one athlete who knows about barriers. When it came to her opportunity to compete in the Asian Youth Olympics, Abdullahi was told it was something she could not do while wearing a headscarf.

Getting involved in competitive basketball at school, she explains that it was the only sport available for girls in Kuwait. While there was no national team at the time, when they did set one up in 2008, Abdullahi’s coach approached her to join.

Having already competed in a range of tournaments in the Middle East, Abdullahi never experienced a problem while playing in her hijab, despite FIBA’s previous rules banning head gear for safety reasons. It became a problem however, when she reached Singapore. Down to play three-on-three basketball in 2009 for the Asian Youth Olympics, she recalls:

“There were rumblings that they may have a problem with the headscarf. But up to the game, the coach believed they had been given the green light. When it came to it the head judge in Singapore objected.”

Three girls from other teams were also stopped and after some discussion, the issue was resolved but she missed two games and she was her team’s captain. She says, “It was the first time it happened but it wasn’t the last.”

Before FIBA changed their rules on head coverings, Article 4.4.2 of their official rules banned wearing them during games as they may cause injury to other players. A FIBA spokesperson said on the rule that although some players interpret this as a ban on certain articles of faith there are no religious connotations to the rule. Abdullahi believed ‘safety’ was an excuse:

“What about people with long hair, pony tails, I’m constantly getting whacked in the face.

If the issue is with the safety pin, then there are special headscarves you can get that don’t require one”.

FIBA took their time deliberating on the rule, creating an ambiguous situation for many players. They put in place a two-year test phase in 2014 allowing players to apply for an exemption. Based on this there was a decision to modify the rule and the FIBA congress said they would only make a final decision after the technical commission put forward a proposal on how headgear could be worn safely by athletes when congress met between 3 and 5 May.

While Basketball wasn’t the only sporting federation with such a ban in place, it was certainly lagging behind other sporting federations including FIFA who have endorsed a sports hijab brand called Capsters. And several organizations and individuals had lobbied hard for FIBA to rethink the rule.

Mara Gubuan from US based advocacy group Shirzanan, who promote the inclusion of Muslim women in sport globally, admits the communication coming out of FIBA was confusing and not widely publicized. She said that some women did go through the process of applying for an exemption but not many.

FIBA overturned their ban, announcing the modification to the rules on May 4th, 2017, and celebrating a ‘historic’ test game in Iran’s capital, Tehran, shortly before. With players now allowed to wear the hijab while they play, it was the first time men could attend a match to watch women play in the Islamic Republic. But the move stands to benefit both FIBA and Nike as they announced a multi-year partnership in February 2017, which makes Nike the official partner for product and marketing at FIBA’s biggest competitions.

Gubuan insists the change in the rules should not have taken as along as it has and agrees the timing is “curious”:

“The fact is there is already a model on the market . . . It’s curious why FIBA hasn’t just requested the evidence from FIFA.”

She believes the tragedy is that women have already been forced to make the choice between their faith and their sport. And another advocacy organization Athlete Ally agrees. Hudson Taylor, who founded the organization to support the LGBTQ+ community avoid discrimination in sport says:

Believing the industry needed allies to speak alongside those discriminated against in the world of sport, he wrote a joint letter with Shirzanan pressuring FIBA to overturn the ban.

Taylor is also skeptical of whether the ban on headgear really was about safety:

“People fear what they do not understand. Once upon a time they could get away with that argument but now the safety question has been asked and answered by several sporting bodies, it’s no longer a justifiable question.”

However, while possible western prejudice against the hijab is one obstacle. Before they get there, many Arab Muslim women must face cultural attitudes dictating sport is not the proper thing to do for a Muslim woman or girl.

This lack of focus means cultural barriers can also be practical barriers. Because sport isn’t emphasized to girls in any meaningful way, there is no infrastructure to train on par with other international teams.

Abdullahi says she had to fight those cultural barriers and although there is now change, it is slow. “And there is still the social attitude towards women who play in sports,” she says. “The Kuwaiti female football team for instance was humiliated on social media when they lost a match recently.” She adds that success would always be limited when the right infrastructure doesn’t exist:

“There isn’t a lot of competition in Kuwait, so there is no advantage of practice. Therefore, how can they compete in other more well established sporting environments”.

Abdullahi isn’t the only one who was hard headed enough to pursue sport, despite being told ‘no’.

Emirati figure skater Zara Lahri, for instance fell in love with the rink when she saw the movie ‘Ice Princess’ at 12 years-old. After three years, her training became more serious, which is when she faced resistance.

“At the beginning my dad was against it because he said I’m older and it’s not the ‘normal’ thing for a girl to be doing. But once he realized how passionate and talented I am for this sport, he then understood there is absolutely nothing wrong with it and supports me 100%.”

Asking whether she faced any further criticism she said, “of course I got some criticism from some people around the world, I still do, but I realized no matter what you do in life there will always be people criticizing it.”

In this way, she says those barriers are small. And when it comes to hijab she doesn’t believe it presents a barrier at all to achieving your dreams saying, ”It is a form of modesty and should be respected.” At the same time, she believes that sporting federations need to facilitate this and find ways for it to be worn within guidelines.

Manal Rostom agrees. Her role as the face of Nike Pro Hijab came from an indignant realization that women in hijab were just not represented in the world of sport. So, she wrote to Nike asking them ‘why?’ They wrote back asking if she would feature in their 2014/15 Nike Middle East Campaign.

Rostom, the first Egyptian to run the Great Wall of China marathon, believes this representation is important as there are so many women in this climate who are thinking about unveiling. That’s why she started the group Surviving Hijab.®, a group that acts as a support network for each other when they are finding the hijab difficult to maintain in today’s climate.

She also laments the fact some sporting federations still feel it necessary to hold back women who wear the hijab, like FIBA. But on the overturn on the ban, Rostom is very hopeful.

“This is why I say the fact that Nike have come out with the Pro Hijab is so significant. It’s Nike. And it will reach that many more people”. 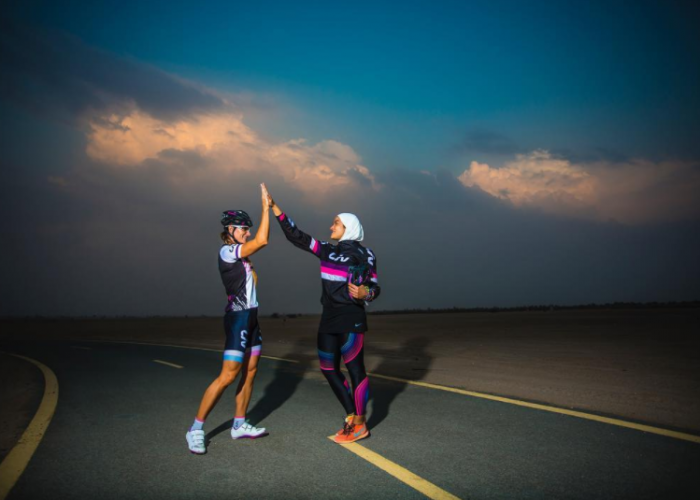 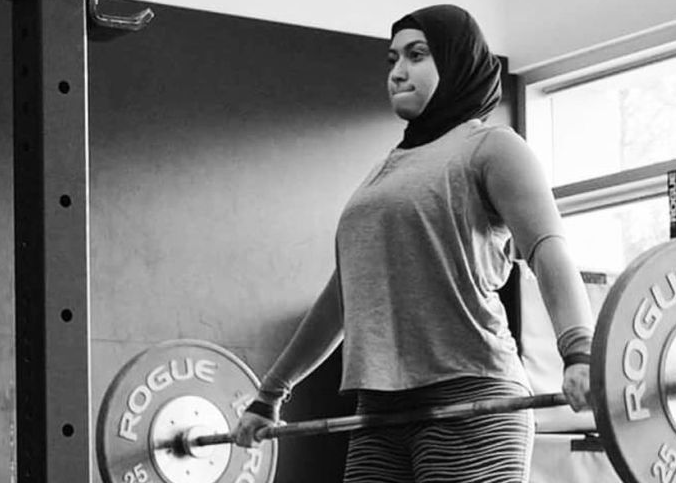 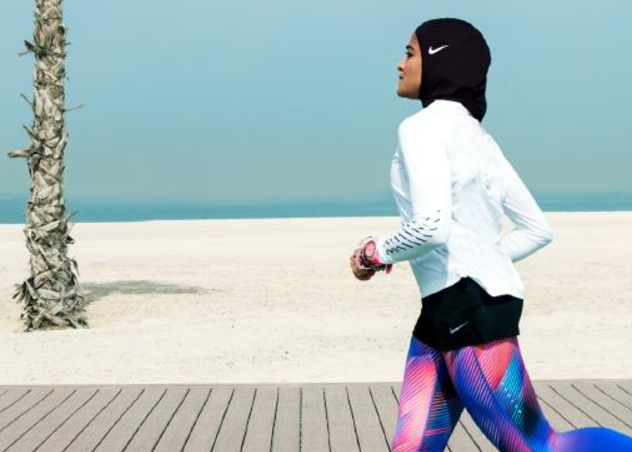 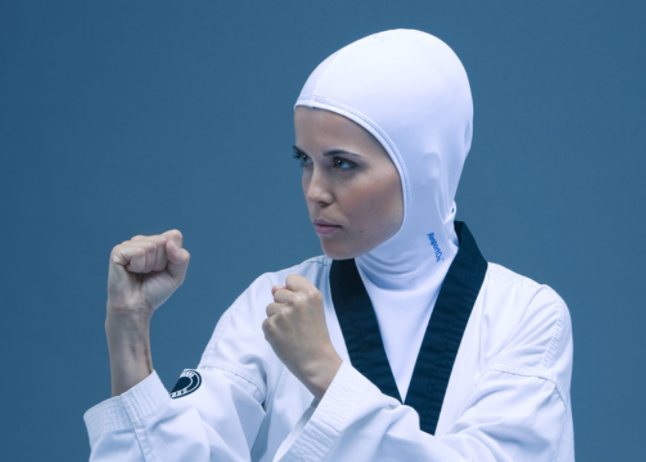 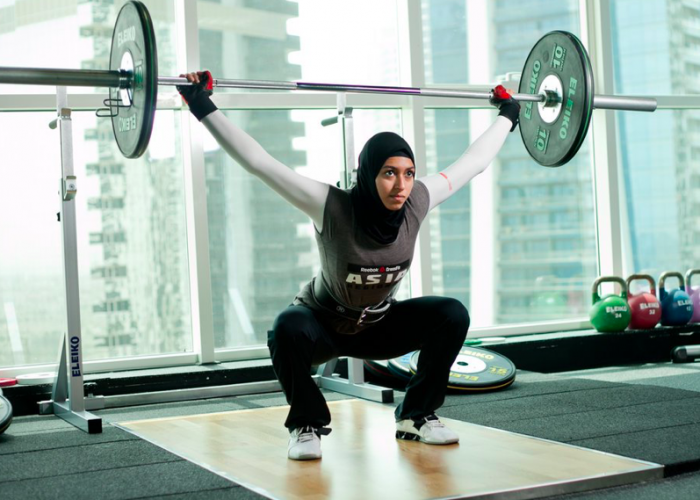 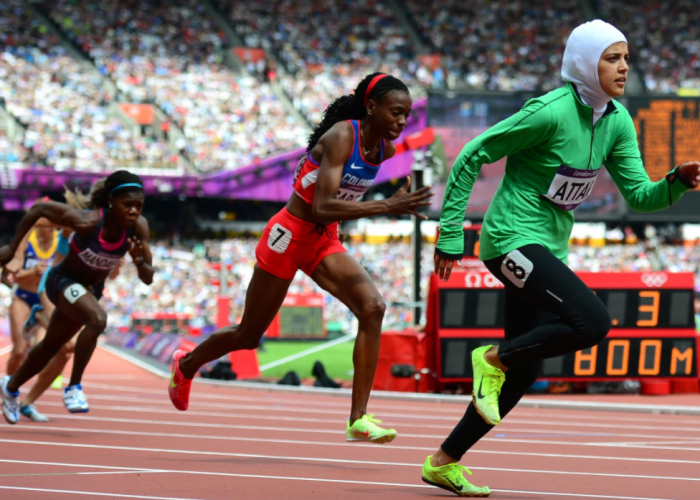 However, even with an overturn of the so-called ‘hijab ban’ within FIBA, there’s much unfinished business. Boxing, rugby, cricket and many other sports are lagging and not applying universal human rights standards. Human rights lawyer Brendan Schwab says:

“All international sporting agencies need to act in a respectful way so that the human rights of Muslim women are upheld.”

He says people have had to make the “discriminatory and unjustifiable choice between their sport and their faith”. Whether there is a historical case for damages, he says is an interesting question that each athlete will need to consider themselves.

Things are however moving in the right direction. And Abdullahi hopes for more progress including female leagues for all sports in Kuwait. Lari wants to “go to the worlds, four continents and the Olympics”, while Rostom is looking to be the first Egyptian to climb Mount Everest. But more than anything they want more girls to pursue sports in their countries of origin and their advice for others reads much like a Nike ad itself.