Round And Round The Census Goes… Still No “Iranian” Check Box.

For the past 30 years and 3 Censuses, my Iranian tradition has been to bitch about the US Census. Specifically how it doesn’t count us. This time, two years ahead of the 2020 Census, I will change my argument. Instead of bitching about how it doesn’t work for us, I will now argue that it’s not working for Anyone. Anymore. Actually. But especially, it’s not working in this “New Age of the American Immigrant” we’re living in.

The current Census questionnaire is like an ignorant American asking an immigrant an equally ignorant question that only amplifies ignorance about culture. Awkward at best. Confused to say the least. The Census pretends it is identifying ethnicity, but it only reaffirms the obsession with mis-identifying race. Which only ensures that Racism continues to be a problem in America. Which is definitely not what a population Census is supposed to do.

Before we get started, let us first be academically, technically, and literally clear and correct. Racially speaking, Iranians as a whole entire people who happen to come from Iran, have always been WHITE.

So our official Racial category or designation is WHITE. Which should now clarify and confuse the precise problem with the Census even more. 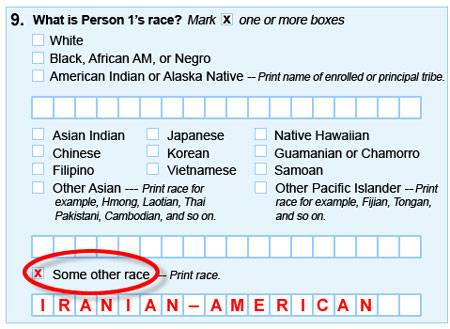 Ethnically, Iranians are as expected, ALL OVER THE PLACE. Iran has no less than 15 distinct ethnicities, each with a unique language, culture, society, origin, heritage, and yes even non-Islamic religions and religious traditions.

Iran’s Ethnicities include Torks, Kords, Lors, Rashtis, Gilanis, Torkamans, Yazdis, Baluchis, Bakhtiaris, Ghashghais (my ethnicity), Ghazaks, and on an on and on. Each unique. Each with their own accents, languages, jokes, and in almost all cases, bigoted hilarious social quirks.

So if each country in the world has a similar ethnic diversity, then trying to track and count all of them exactly and accurately, is obviously too much to ask of a necessarily ignorant US Census.

Some Other Dirty Race!

And yet, the US Census still tries to do it. By asking Hispanics to fill out a separate form that has at best 5 of the more than 21 known Spanish speaking peoples of the world. It  embarrasses it self even further by segregating the Primary Asians (China, Japan, Korea etc.) from “Other Asians”. It then seals it’s ill fate and lumps all the latest additions to America like Iranians, Arabs, and Indians into a catch-all called “Some Other Race”. Which can’t help but  sound altogether like, “Some Other Dirty Race”. Past attempts to get us to fill out the “Some Other Race” field by writing in “Iranian-American” have not worked. Poor us! Poor US Census!

Why Should Iranians Care?

One of the biggest sources of simultaneous frustration and pride for Iranians in the US, is the feeling of lack of respect and recognition we receive or don’t receive.  Recognition for all of the “Accomplishments” and “Contributions” that we annoyingly keep telling each other via powerpoint email attachments, that we make, to America. Although, to be honest, our contribution is mostly just financial. And mostly from the least effort, by paying taxes.

To an Iranian, a Government Welfare Program is a Charity, that helps unfortunate Americans, who are not lucky enough to be Iranian in America.

Iranian Doctors explain their need for a Porsche like this,

“I need a fast car so I can get to the Hospital faster, you know, to save lives.”

That being said, and other than what seems largely ego driven professional accomplishment, Iranians don’t contribute all that much to what Americans consider to be America. Nothing much culturally, like no action films, no pop music, and really, nothing of what anyone would consider actual art.

We have like maybe two decent chefs, who keep insisting on introducing America to Chelo-Kabab.

“No It’s much more than Meat and Rice. Persian rice is fluffy, not sticky!”

Few if any actual inventions. Mostly just super detailed arguable patents that mostly just “Improves the efficiency and function of…[insert existing invention or thing here]”. We aren’t inconsequential, or unsubstantial. But as a result of lacking “it”, we are pretty normal as an immigrant population in America.

Our biggest desire though, is to be recognized at anytime, for anything.

So, what better way to gain the recognition we crave, and the national adulation by America that we want to follow, than to help America “Improve the efficiency and function of…” THE CENSUS! America’s most pressing current social problem. Especially at this time! Especially when concerns over all the foreigners infesting America now, is at an all time high!

I offer that the US Census is our moment to shine. It is the “American invention”, that “Iranian Engineers” were born to “re-design and improve” upon!

The Census currently tries, and fails miserably, at once, in one very badly designed form, to attempt to answer two unrelated questions. It tries to identify Race and then thinks it can even go near Ethnicity. It does this by very few poorly worded questions and even worse choices available in checkboxes. Somehow, everyone in the country, coming from every corner of the 190 plus country world, is supposed to try to fit into a badly fitting form. In half a page. On a form that is not even as big as a full sheet of paper.

Not only is Race a mysterious mixed-marriage impossible calculation nowadays, simply having two parents, each coming from two different backgrounds themselves, only guarantees at best a four quarterly Ethnic gross miscalculation as well. It simply cannot be done.

A White Man (John) born to a half White half Guatemalan father (Mike) and a Half-Mexican, Half-Black mother (Luisa), is at once White, Black, and Hispanic. Yet on the current Census, John can only choose to either dis-honor and insult his father Mike, and insult and dis-honor his mother Luisa, by checking the one of the inaccurate boxes available. WHITE. If John wants to check HISPANIC or BLACK… – well, in today’s America, John will never check HISPANIC or BLACK, if he can check WHITE, so no need to talk about that.

The same goes for Iranians. Iranians almost ALWAYS check WHITE like John. Because Iranians are WHITE! Unlike Hispanic Americans, there is no special page or another IRANIAN questionnaire section, or any box for Iranians to check!

Asians are assumed to be the same race. So Chinese are Asians. As are Japanese. As are Vietnamese. As are Koreans. Ethnically however, they are completely different. Koreans for example are really different. Korean actually get visibly angry when they are pissed off, and weirdly tend to smile and laugh out loud when expressing actual joy.

I’m leaving religion out of this until Islam reforms itself. Plus most Iranians who don’t practice any part of Islam, and haven’t for generations, still when asked today, automatically tell everyone they and all Iranians are Moslems! Until ironically, a truthful answer to “the religion question” can be given, ALL Religion has to be excluded from any demographic survey like the Census.

Clearly, as long as there still visually distinctive races left in the world and everyone is not beige, asking one’s Race is still important. But Ethnicity is completely problematic. And Impractical. And Obsolete. Just to identify all of the Iranian ethnicities would require over 15 boxes alone.

But the real question every immigrant is faced with in America is, “Where are You From?”. Or Country of Origin. And as surprised as you might now be realizing it, NO Census has ever asked this most burning question that everyone wants to ask, and that ironically, everyone wants to answer!

So to help America. To be finally recognized for a contribution other than taxable withholding. Iranians should now come together. Torks and Rashtis alike, Lors and Kords. Bakhtiaris and Ghashghais. And work to fix the US Census, so that it continues to ask a broader Race question. But that then, it also asks your Country of Origin.

By fixing the form, to include the most populous countries of origin in America, most of the population could be identified both Racially, and by Nationality with enough boxes.

And with a simple elegant single open write-in country line, called “Not Listed”, will enable new immigrants to meet a set population count, in order to add themselves to the growing list of “Country of Origin” and their own check box.

By doing this, the Census will become more accurate Racially as well as Culturally. Finally Hispanics will be recognized as Mexicans, Costa Ricans, Guatemalans, Panamanians, and every other country that is now lumped into one very contentious confused category of “Hispanic or Latino”, then lists only 5 countries out of the 20 countries that speak Spanish. 21 if you include Spain!

The current Census continues to confuse Ethnicity with Country of Origin. So we should clear up the confusion. By the fact of two parents, a person’s ethnicity can never be accurately counted. So it should be removed. Which will leave even more room for “Country of Origin” boxes. 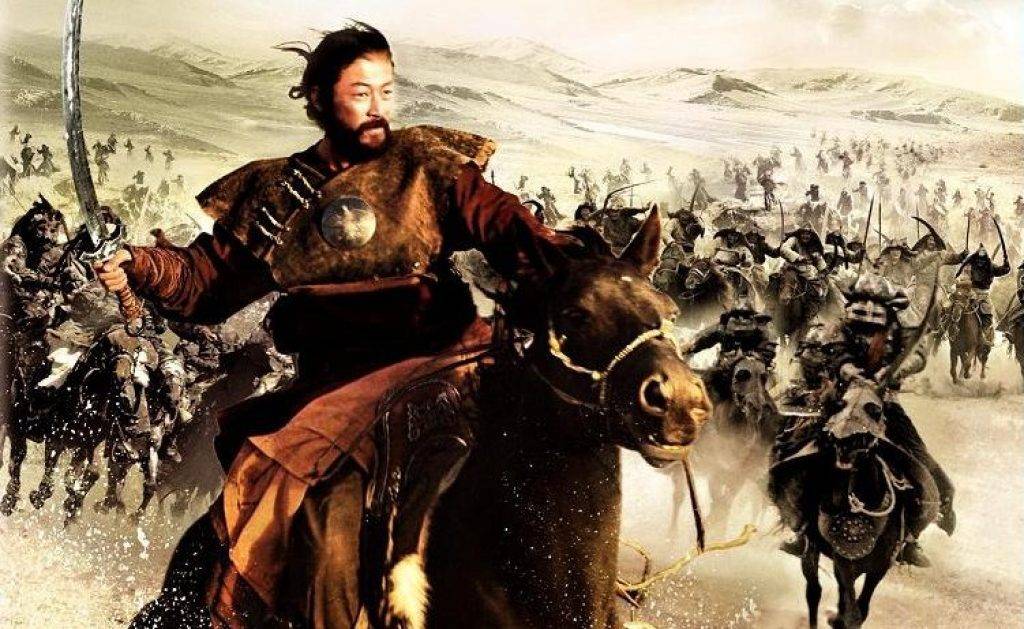 As of now, ethnically speaking I’m one Half-Ghasghai, one Half-German. Being Ghasghai makes me a direct blood relative of Genghiz Khan. Being German makes me pre-disposed to rule the world in another way. Through efficient well-built reliable and safe automobiles. But knowing this about my ethnicity, what in the hell, may I ask, are you going to do with me?

Before you answer that…

Disturbingly quiet plans are currently afoot, by PAAIA, and other self appointed, unelected, and largely unauthorized Iranian community groups absent of any large number of the actual Iranian community, claiming they know what Iranian-Americans want. Which apparently, according to PAAIA, is to now strike a deal with Middle East Arabs and North African Arabs and add “Iranian” to a new single super ethnicity, one all inclusive MENA group. We don’t even get our own letter in the acronym. Not even NOWRUZMENA.

If MENA sounds MEAN, that is because it sort of is. By virtue of not being Arabs, Iranians are also not part of the Middle East. Because historically we never have been. It is only the Iranian Government that recently has become notorious for meddling in the Middle East. Normally, we’re just Iran. A leftover country from Persia. As Persia however, we used to own far more “Real Estate” than we do today. Even in California.

And of course, Iran is most certainly not part of Arab North Africa. Although as Persia we owned Egypt. Twice!

We still own the Persian Gulf though. For now at least!

Arabicizing and melting the Iranian-American demographic profile into MENA now, or in 2020, will make MENA appear to be a coalition of Middle East Arabs, North African Arabs, and now Iranians. Who we have established are certainly not your everyday Arabs. MENA will now become notably stronger with Iranians and our incomes added to it. Iranians will then become MENA. And possibly lost forever.

I won’t lie. There may be some civil and political benefits to doing this. It might be advantageous to be included with MENA. PAAIA might finally get one or two paying dues members out of it. I can’t publicly judge. (Privately? After a few drinks? Maybe). But it seems a shame to lose pride and our entire national Iranian identity in 2020, without even a public debate about it, simply by PAAIA filling out some forms, that it doesn’t technically have the authority, or right to.

Worse, being part of MENA will undoubtedly confuse everyone about our real Iranian identity, at a time when the clarity and correct categorization of the country of origin of ALL Americans, and their true cultural values, is critical in claiming our fair share of high income tax paid civil, civic, political affiliation, city and county zoning, public expenditures, fire, police, parks and recreation, burial, and even liberal rights.