Was Omid Djalili’s Performance In ‘Fiddler On The Roof’ Any Good? Here’s What The Reviews Say

Omid Djalili, the award winning 51 year-old Anglo-Iranian actor/comedian just starred in an adaptation of the popular musical, “Fiddler on the Roof.”

The musical tells the life-affirming story of Tevye (Djalili), a poor milkman whose love, pride and faith help him face the oppression of turn-of-the century czarist Russia.

Here’s what the reviews have to say:

“Djalili is a pleasure as the stoic milkman, with five daughters of marriageable age and a God who seems to have it in for him. In Djalili’s interpretation, he is flawed – quick to anger, always trying to assert his masculine authority – and also deeply human. Djalili and Evans make us love him not in spite of the flaws but because of them.”

“There may well be commentators who argue that no matter how committed Djalili is, he’s over-stepping the mark.

Yet from my ordinary-goy vantage point – rather too far back, actually, in Chichester’s unhelpful, intimacy-crushing barn of a main-house – I couldn’t discern Djalili’s performance to be anything other than a triumph. There’s so much gusto, so much delight, taken in the playing of this outwardly simple soul (with a redeeming-endearing capacity for internal self-debate) that Djalili earns his keep (even the temporary right to sport a yarmulke) at every step.”

“Talk about a Middle Eastern conflict! Omid Djalili, a British stand-up comic of Iranian origin, must have appreciated the irony of being cast as Ashkenazi Jew Tevye, a role indelibly associated with the Israeli actor Topol from both theatre and film. […] No conflict here. Just a damn good show.”

“Omid Djalili is outstanding as Tevye. He has the audience hooked right from the opening number and then has them cheering after ‘If I Were a Rich Man’. He squeezes every ounce of comedy from the role through looks, gestures, dancing and particularly with his addresses to God. He is also capable of delivering pathos and becoming the thundering patriarch when required.”

“But the real power is uncorked by Omid Djalili as Tevye and Tracy-Ann Oberman as Golde his long-suffering wife of 25 years. With split second comic-timing and an earthy determination to be good parents and neighbours, they project a natural authenticity and good nature which transcends religion, time and place.”

“Comedian Omid Djalili doesn’t fully muster the weight of that wrench. Too quick to play the beleaguered schmuck, all sighs and shrugs aimed at the heavens, his Tevye is primarily a comic attitude. “If I Were a Rich Man” becomes an idle daydream, trilled quietly to himself. There’s too little at stake: no urgency in his battles to keep poverty at bay, no grizzled determination to protect his family at all costs. You never feel he might tear himself in two: the man of faith and the loving father.”

“The delivery was more conversational than that. There lies the drawback to an otherwise agreeable and moving evening: the singing is not what it could be.

Mr Djalili has pailfuls of stage presence and is a tremendously engaging central figure, but he sings no more powerfully than a decent Herefordshire church choir baritone. When you put him up against a lively 14-person orchestra in a theatre as large as Chichester’s, his voice disappears. Audiences at musicals tend to expect a bit more warble for their ticket.” 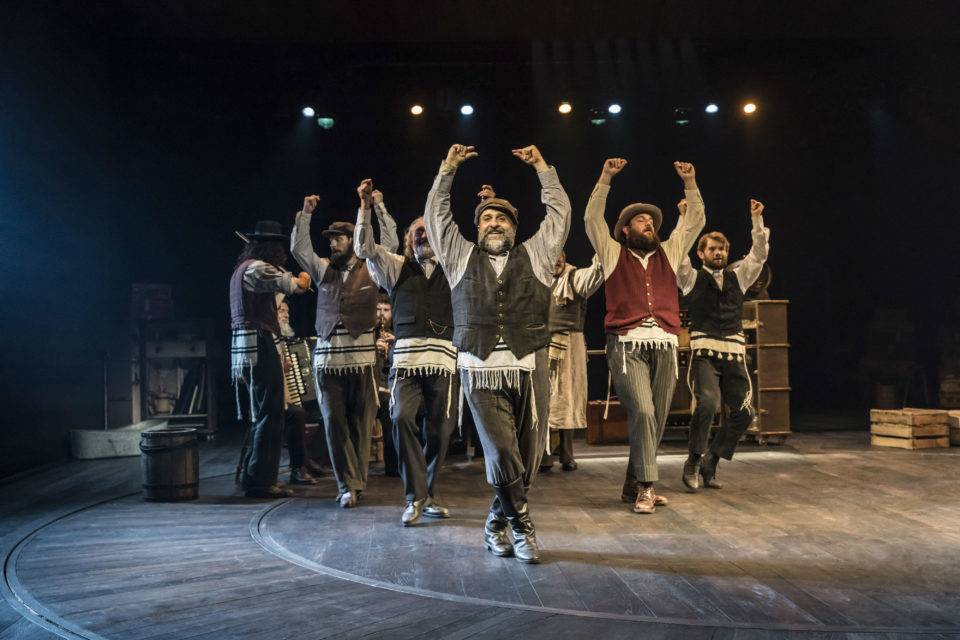 “At the heart of it, still fighting the good fight whichever way he can, is Tevye – a simply outstanding performance from Omid Djalili as the man desperately trying to make sense of it all as his increasingly-rebellious daughters seem strangely disinclined to listen to him when it comes to marriage – a man who knows the writing’s on the wall for his whole way of life.

You sense Djalili the stand-up in his warmth and his twinkle on stage and in the way his Tevye vents his frustrations on a God who really isn’t prepared to play the game; but just as importantly, you sense a superb actor, as powerful as he is poignant, stirred to fury but also – in perhaps the night’s finest scene – urgently needing the reassurance of his wife’s love.”

“Fiddler On The Roof” will be playing at the Chichester Festival theatre until September 2, 2017.

PrevPreviousThe Middle East: A Powder Keg With More Wars To Come
NextMaryam Mirzakhani Was A Role Model For More Than Just Her MathematicsNext