There are many examples of Iranian cultural influence on East Asia. In this article, several examples of this influence in Japan and China will be listed.

Iran is located in West Asia (wrongly known as the Middle East, even among Iranians). It has influenced many cultures throughout its rich history from music to food preparation, and even some imperial traditions were borrowed from the Iranian system of government.

According to the “Shiji”, a historical book written by Sima Qian, Iranians were known in China as An-XiAn-Xi means Arsak/Ashkanian and the Parthian Empire extended into to the Chinese language, including Pacoros and Emperor Zhangs letters. An-Xi (Parthia/Iran) Gao means high (i.e., from a noble background). Thus An-Xi Gao refers to a Parthian with noble background. Sima Qian and his associate An Xuan wrote about Wudi and Mihrdat and how they knew each other. Qian was the first person to translate Buddhist texts into Mandarin which had a major impact on Chinese history.

In countries across East Asia (not just China!), including Korea, Vietnam and Japan, these two individuals are considered holy. They were instrumental in Buddhism gaining popularity.

History teaches us that the Chinese were well informed about Iran. For example, after the overthrow of the Parthian Empire, they stopped calling Iran An-Xi and they started to call it Po-ssi or Bo-ssi which means Parsi in Chinese.

The Tang-Dynasty were close allies with the Sasanids. Some historians believe China tried to free Iran from the Arabs and some Iranians left to live in East Asia by way of the silk road.

An interesting story is that of An-Lu Shan a Sogdian-Iranian who became the Emperor of China. Iran was a part of the Chinese history, and later during the Islamic Period, many Hui-Chinese like Zheng He were of Iranian-Khwarezmian ancestry. Also the Barmakiyan-Family, a mixed Zoroastrian-Buddhist Iranian family, had important positions in India and East Asia.

The first mention of Iranians (Persians) coming to Japan can be found in the Nihon Shoki (Chronicles of Japan). One of the earliest Japanese historical sources, completed in 720 C.E. It records that in 654 C.E. several people arrived in Japan from Tokhārā (Aston, pp. 246, 251, 259). Though there is some controversy about the location of Tokhārā, some scholars have claimed the name to be a shortened version of Toḵārestān, which was part of the territory of Sasanian Persia (Itō, 1980, pp. 5-10).

Iranian people of Central Asia were the link between West and East Asia as a whole and the civilizations of ancient Iran, notably Sassanian and post-Sassanian culture(s). Open and tolerant, the Soghdians, Kushans, Tocharians, etc. established a sophisticated literature and urban culture (Lecture slide from Kaveh Farrokh’s lectures from the course “The Silk Route: origins & History“).

Elsewhere in the Nihon Shoki, it is mentioned that in 660, when an Iranian (Persian), whose name was Dārā, returned to his country. He left his wife in Japan and promised the Emperor that he would come back and work for him again (Aston, p. 266; Imoto, 2002, pp. 58-60). 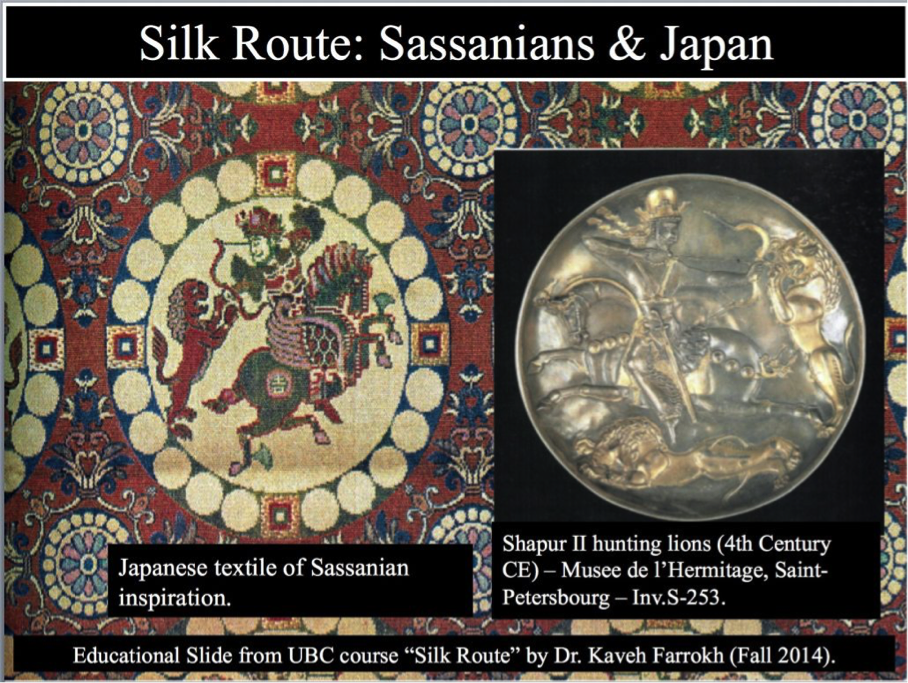 In the 7th to the 9th centuries, foreigners—then known in Japanese as toraijin—were coming to Japan mainly from Korea and China, bringing with them technology, culture, religion (Buddhism), and ideas. Eastern Asia, especially the Tang Dynasty of China (618-907), had socio-economic networks with many regions of the world, including southern and western Asia.

Chang’an (present-day Xi’an), the capital of the Tang Dynasty, was an international city with people from various countries, including Iranians (Persians). It should be noted that some even traveled further to Japan. Iranian names are to be met with in historical documents, and one can find some influence of Persian culture in the architecture, sculptures, and also in the customs and old East Asian rituals at that time. For example, some scholars have claimed that there is some influence of Persian culture in the Omizutori ritual held every February at Tōdaiji temple in Nara (Itō, 1980, pp. 125-33).

The oldest document in Parsi, which is preserved in Japan, was procured by the Japanese priest named Kyōsei (1189-1268) from Iranians (Persians) during his trip to southern Asia in 1217. Thinking they were Indians, the priest asked them to write something for him as a keepsake. However, after his return to Japan he found out that they were not Indians, because no one could understand what the writing meant. This document was discovered in the late 20th century, when it was established that it is written in Parsi and contains a line from Ferdowsi’s Šāh-nāma (qq.v.), a line from Faḵr-al-Din Gorgāni’s Vis o Rāmin (qq.v.), and a quatrain of unknown authorship (Okada, 1989).

Music has no boundaries, words from one language can be combined with musical tradition of another. The following is a beautiful singing.

Footnotes: In addition to public domain sources, the data were obtained from, “Japan and Ancient Iran” , “Christopher I. Beckwith: Empires of the Silk Road” and Kaveh Farrokh’s lectures at USC and UBC were reviewed.

Mazda = Ahoora Mazda (God of light), the name Mazda came into being with the production of the company’s first trucks.

Nissan Qashqai: This name came from Qashqai tribe who live mostly in mountainous Southwestern region of Iran.  (Qashqai means “a horse with a white forehead”