Afarin Rahmanifar, who grew up in Tehran, Iran, moved with her family to the United States in 1989, 10 years after the Iranian revolution.

The clash of cultures, East and West, shows up in Rahmanifar’s artwork in “The Memories Between, Women of Nobility,” a new show that opens Friday, Oct. 13, 6 pm, at the ArtWalk at Hartford Public Library, 500 Main St., Hartford. The show runs through Dec. 2. A five-minute video of Rahmanifar’s work will screen in the gallery during the exhibition.

The artist, who teaches at Eastern Connecticut State University, incorporates iconic images of women, from her daughter’s Barbie doll, to Scheherazade, the Arabian storyteller in “One Thousand and One Nights” who charmed a vengeful King into sparing her life.

Two larger images in the show are variations on “Unraveling,” where Rahmanifar looks at oppression of women in Eastern cultures and social media targeting in Western cultures.

Her most recent series, represented in two paintings in the current show, is a depiction of 20 women mentioned in Shahmaneh (The Book of Kings), an epic work by Persian poet Ferdowsi that describes the creation and history of Iran in its 62 stories told in 50,000 couplets. She has completed about half of the 20 characters.

One of them is Faranak, wife of Abtin and mother of Fereydun, who hid the boy for safety. The boy later grows up to become king and rule for 500 years.

“These drawings are my interpretation of the stories,” Rahmanifar says. “In some of them I write their names in Farsi, which will look like part of the design.”

Rahmanifar feels the pull of two cultures in her own life. “I have been here a long time and appreciate the freedom I have,” she says. “But I carry both cultures with me.” 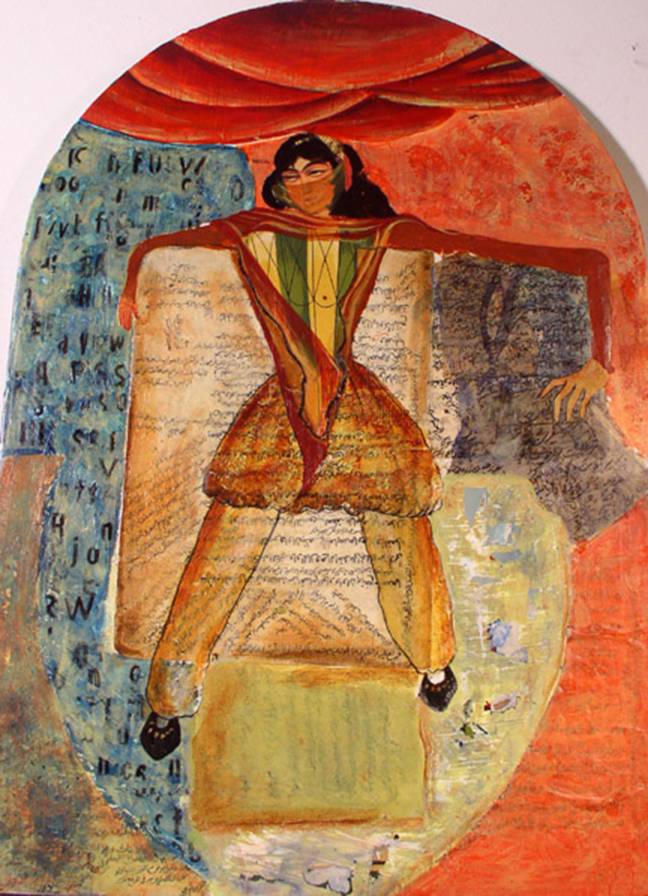