Fatemeh Akrami, the only female skydiver in Iran, hopes to instruct skydiving to as many interested girls as possible.

“My goal is to become a skydiving instructor for Iranian girls,” Akrami, 24, said in an interview with the Tehran Times.

“I am an Iranian girl and my responsibility is to boost the number of female skydivers in the country”, she stated.

Akrami went on to say that if she lived abroad, she would prefer to fulfill her own wishes, but, in her homeland, she has another duty.

“There is no female skydiving instructor in Iran and there are many interested women who do not have the chance to learn skydiving abroad as I did”, she noted.

“I began skydiving in 2012; at that time I was the only Iranian female skydiver,” said the former member of national gymnastics team, adding, “I burdened many troubles during these 5 years, especially for skydiving in Iran. As a girl, I should join many skydivers who were military personnel and they were all men, however, I was neither a military personnel nor a man.”

“The male skydivers guarded against me, looking at me as the weak gender who may make mistakes and mistake has no place in this field of sport,” Akrami said.

“I was not disappointed but I tried to be the best and to make the least mistake and observe my hijab”, she added.

My insistence on skydiving gave encouragement to some other women to do skydiving and today there are about five female skydivers,” said Akrami. 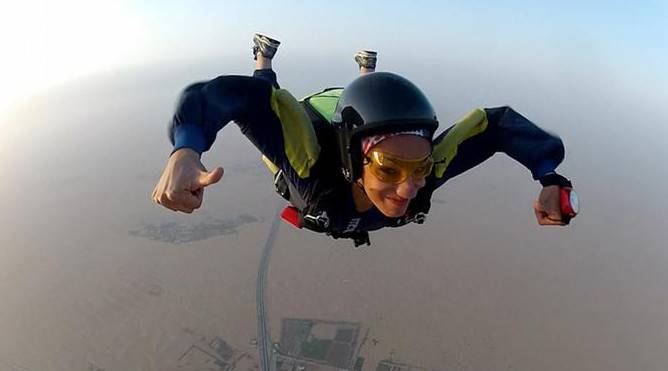 They all began skydiving after me. One of the Iranian female skydivers is a 15-year-old daughter of one of the male military skydivers who have learnt skydiving in Iran; the other 4 have been trained in other countries, she added.

“I will become a skydiving instructor during the coming 6 months. There are many Iranian girl who are interested in skydiving and send me messages about how they can learn skydiving,” the flying girl of Iran said.

There is variety in gymnastics and doing gymnastics since I was five lead me to seek for variety in other sports which I did not find in many sports I tried.

I did not find variety and excitement in running and Wushu, then I tried parkour and at the first session I found out that I can be good at it, said the former student of computer software engineering.

Parkour is a training discipline using movement that developed from military obstacle course training. Practitioners aim to get from one point to another in a complex environment, without assistive equipment and in the fastest and most efficient way possible. Parkour includes running, climbing, swinging, vaulting, jumping, rolling, quadrupedal movement, and other movements as deemed most suitable for the situation.

“Then I tried to join skydiving courses in Dubai which was the nearest country to Iran,” Akrami said.

There were training courses in Iran, but because of its delays I tried another country, she explained.

Skydiving is a kind of addiction, when you begin, you cannot leave it and you want more and more and reach upper stages, Akrami who has taken about 250 dives since 2012 noted.

There were two kinds of people who encouraged me to follow skydiving: first those people who believed that I, as a girl, am not able to do the job and it gave me more motivation to prove my capability.

From the beginning when I did gymnastics there were some who believed that women are weak. The same thing happened about parkour and then skydiving, the strong-minded girl said.

On the other hand, I’ve got the overall support of my family not caring about my sex and being the only child of the family, she stated. 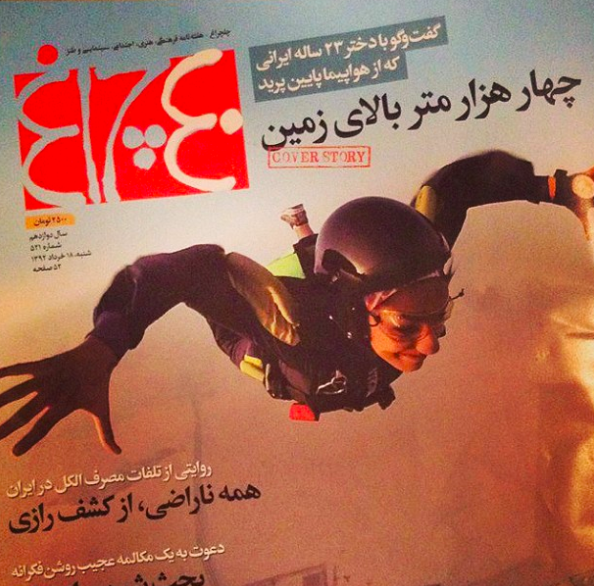 The first time, I enrolled in a skydiving class in Dubai, I was late and I didn’t join the class. When my mother came to know about my hesitation she, herself, booked another ticket for me and pushed me to join the skydiving course, she explained.

“Off course, skydiving is a risky sport and you should never make a mistake in it, but I believe that gymnastics is more risky than skydiving.

However, any activities has its own risk, Akrami expressed.

Although it is a very risky sport, I have an optimistic view about it. I believe if someone doubts whether her parachute works or not, it will not work. I never think bad, therefore, I am not scared of skydiving.

The first time I experienced skydiving, there were many skydivers around me who gave me a very good feeling and told me the first dive is the best experience of skydiving. When I saw their positive viewpoint, and clam and joyful reaction about skydiving, I thought that I am someone like any of them and I enjoyed my diving; and it happened, said the flying girl.

Recently I began a wingsuit flying that is the sport of gliding through the air using a wingsuit which adds surface area to the human body to enable a significant increase in lift, Akrami added.

The most important barrier in front of me was the expenditures of skydiving. Currently, I am driving the car of my hopes with the fastest speed but a barrier always bans the road of my success, i.e. the expenditures, said the student of physical education.

There is no sponsorship for skydiving in Iran, she noted.

Public show very good reaction about my job and the sport of skydiving for women, she maintained.

Foreigners, too, received me very well as the first female Iranian skydiver and they were happy that I am spreading this sports in another place of the world.

Since skydiving was a sport merely done by military men, at the beginning Iranian male skydivers guarded against me, looking at me as the weak gender. They were not happy and helpful at my first dives in the sky of my country, she told in a self-confident manner.

Day by day, viewing my skill and talent in skydiving, great changes happened in the viewpoint of male Iranian skydivers about me, she expressed.

Akrami went on to explain that “now the same military men call me and invite me for skydiving events and I eagerly accept it.”

I love skydiving in the sky of Iran, she said, adding, my first skydiving in Iran was in the city of Kalaleh, Golestan Province, north of Iran. I saw the land of my country more colorful and more beautiful than the sceneries I had ever seen in the sky of Dubai, that was all desert.

Then I experienced another very beautiful skydiving in Gilan Province, north of Iran, watching beautiful landscapes I had never seen in Dubai, the brave skydiver of Iran explained.

Girls are not more scared of skydiving than men, said the lover of art of sewing, stating, when a skydiver, male or female board the plane, all presuppositions about the genders are vanished, equality is felt and everybody is thinking of doing the right performance, she exclaimed.

All world records of skydiving are for men and women together and never a women is considered less capable of men in skydiving, Akrami maintained.

There are many women who want many things but they do not try hard to gain it. If someone really wants something she should make her best to achieve it, Fatemeh told the Tehran Times.

I was not grown in a very rich family, but when I wanted to reach my goal I tried hard for it. I worked hard and collected money to reach my objective. I disregarded buying a better car, a good cell phone, even going to restaurants with my friends. I disregarded my small wishes in order to reach my great wish, she noted.

I deeply believe where there is a wish there should certainly be a will. Women should know that they should take steps themselves not waiting for others to help them, the determined girl concluded.