When I think about intelligent, creative and interesting Muslim women I often picture women such as Fatima al-Fihri, who founded the world’s oldest university in Morocco; or Prophet Muhammad’s wife Khadija, who was a successful merchant and the first convert to Islam; or Iranian-American Anousheh Ansari, who became the first Muslim woman to travel to space. As you can see, Muslim women passionately contributing a plethora of knowledge and wealth to our international communities is not a new phenomenon.

Globally, we have benefited from their dedicated efforts for centuries and yet anti-Muslim sentiments and Islamophobia continues to spread at an alarming rate. For example, Muslim women who wear traditional Islamic clothing, such as the hijab or niqab, are more likely to face incidents of abuse than women who are not veiled.

A study by Tell MAMA (Measuring Anti-Muslim Attacks), a U.K. based organization, has shown that approximately 56% of Muslims who are harassed or attacked are women. Many female victims of Islamophobia believe they were also assaulted because of their gender, due to the sexist and misogynistic language used by their attackers.

Furthermore, according to the Southern Poverty Law Center’s Hate Map, approximately 101 anti-Muslim hate groups are currently present in the United States. Despite the increase in anti-Muslim hate crimes and the rise of Islamophobia in the U.S. and Europe, we cannot allow such and bigotry to spread. 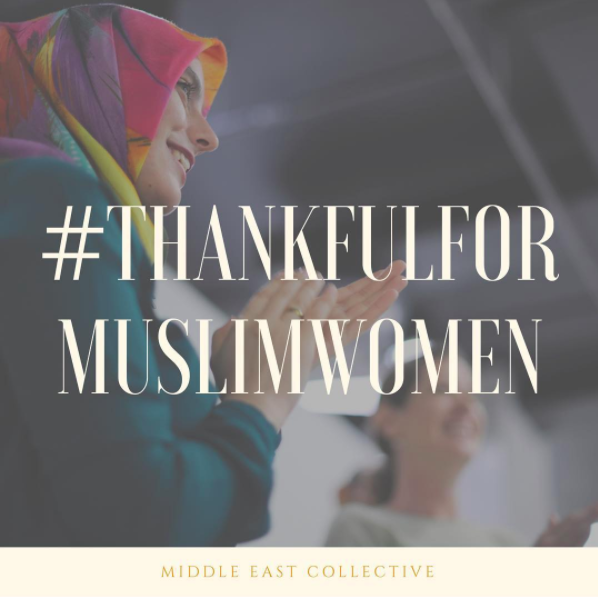 Throughout the month of November many people in the United States will focus on showing their gratitude, counting their blessings, and giving back to their communities. The hashtag #ThankfulForMuslimWomen was created by MEC in order to give thanks to the many inspirational Muslim women everyone can look up to, and to show how Muslim women have been prevalently shaping our society.

We hope to elevate the diverse and courageous voices of Muslim women. #ThankfulForMuslimWomen will also aim to emphasize that Muslim women cannot be defined as “damsels in distress who need to be saved”.

Artists, scholars, women who wear the hijab, women in politics, women who are not veiled, women in foreign policy, and numerous other women making progressive impacts in our communities deserve to be honored for all of the valuable work they have produced throughout history. Brilliant women such as Rana Abdelhamid and Mona Haydar have been recently featured on our Instagram account thus far.

You can take part in this month’s movement by following #ThankfulForMuslimWomen on MEC’s Instagram account and letting the initiative know about the Muslim women who you find inspiring, as well as sharing this post, informing your networks of the hashtag, calling out Islamophobia when you see it happening and giving your thanks to the Muslim women in your life.