Ahwazi Arab activists incarcerated in Iran’s infamous prisons are facing all forms of torture, persecution, and oppression at the hands of prison staff in punishment for supporting freedom, according to smuggled reports.

The Iranian regime has been launching crackdowns even more brutal than usual against activists in the region and across Iran, fearing an uprising, with people living in fear of falling victim to the near-daily raids by regime security personnel on the homes of anyone suspected of speaking out against the regime or protesting at its injustices.

Once imprisoned, detainees are routinely coerced into signing false confessions, admitting to fabricated charges or crimes which they had nothing to do with.

In response to this latest wave of regime brutality, Ahwazi activists and other supporters of freedom at home and abroad have come together to show solidarity with the persecuted dissidents of Ahwaz, launching online campaigns, contacting human rights organisations, and exposing the regime’s crimes against humanity.

The horrendous abuses which detainees are subjected to include electrocution, beatings, sleep deprivation, rape, brutal interrogations at all hours of the day and night, denial of family visitation rights, constant threats to detain or torture family members, ransacking of belongings, and confiscation of cellphones.

Ahwazi activists and other dissidents are routinely coerced into confession by extreme torture to enable judges to issue wholly unwarranted sentences against them.

Disease is also widespread among prisoners due to the horrendous overcrowding and unsanitary conditions, with open wounds from torture becoming easily infected.

The regime deprives the inmates of the most basic healthcare, allowing and actively encouraging disease to flourish.

One case in point is Abdullah Neisi, a 42-year-old Ahwazi political prisoner, who has contracted tuberculosis as a result of prolonged torture and detention in unimaginable conditions in one of the regime intelligence service’s notorious detention centres.

The news of Neisi’s diagnosis was revealed by Ahwazi human rights activists who wished to remain anonymous for their own safety on November 6.

Neisi, from the village of Shbeisha located to the north of the regional capital, also called Ahwaz, has reportedly been subjected to prolonged and severe torture during his detention at the hands of regime thugs.

Activists say that while Neisi has so far survived the merciless torture in prison, he is unlikely to survive the diseases he contracted during his detention.

This latest report comes as the repressive regime continues to escalate its murderous campaign against Ahwaz in the effort to crush the Ahwazi people’s struggle for freedom, democracy, and human rights.

Forty-two-year-old Fahroud, who is married with three children, lives in al-Daria district. He was arrested three days before Eid Al-Adha at the end of August 2017, having been detained 12 times before also for the ‘crime’ of his human rights activism. He is currently detained in one of the prisons run by the regime’s infamous intelligence service. 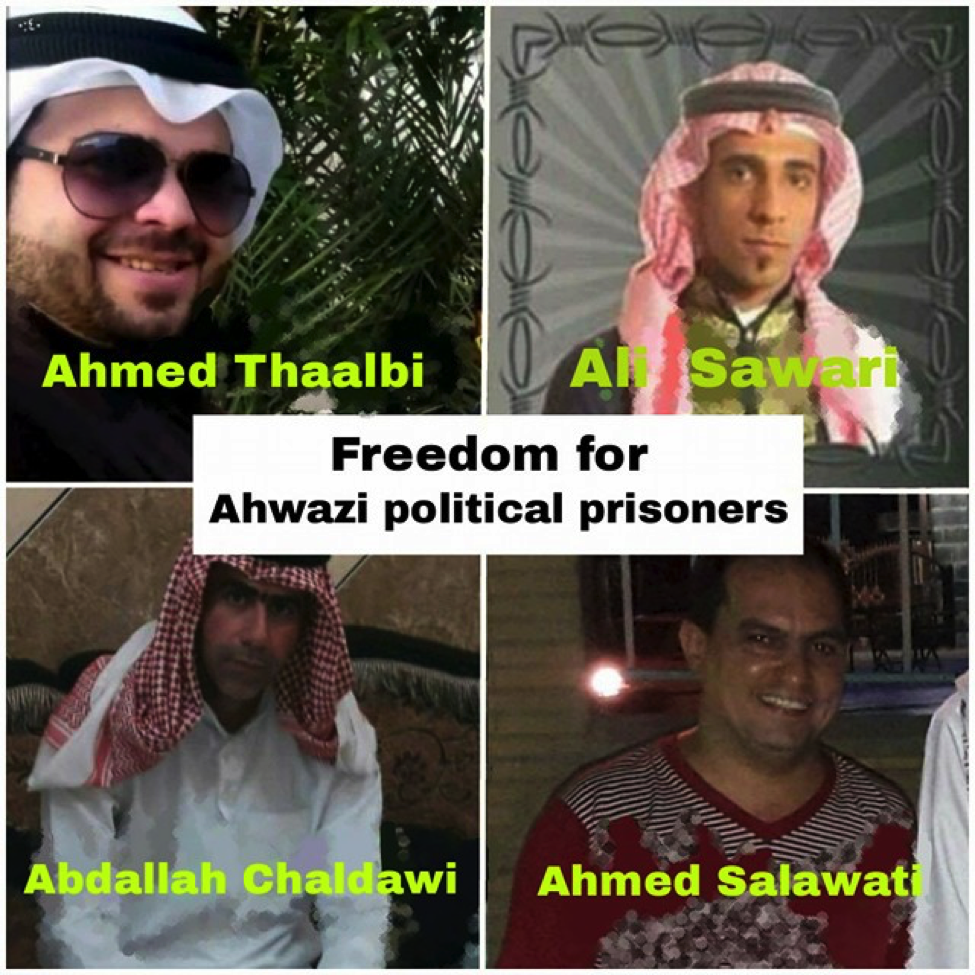 Another activist, Ahmed Salawati, aged 35, was arrested in a raid on his home three months ago and taken for interrogation in the regime’s notorious Shaiban Prison before being transferred to an intelligence branch jail. Salawati has previously sentenced to three years in jail nine years ago on charges of liaising with foreign activists.

Twenty-seven-year-old Ahmed Thaalbi, arrested four weeks before the time of this article going to press, is now detained in Shaiban Prison.

In response to the regime’s latest brutal campaign of repression activists inside and outside Ahwaz have launched an online campaign, using the hashtag #Free_Ahwazi_Prisoners – to show solidarity with the unjustly imprisoned freedom activists and raise awareness of the horrendous injustices perpetrated against the Ahwazi people.

Commenting on the campaign, activists said that the Iranian regime has relentlessly pursued repressive measures against Ahwazis since it annexed the Ahwaz region decades ago.

These measures include indiscriminate arrests, forced disappearances, and arbitrary imprisonment, with the arrests often conducted in the middle of the night without warrants.

In a statement acknowledging the horrendous risks which any Ahwazi activist or Iranian dissident takes simply to support freedom and human rights, the activists said, “As the consequences of the path we chose are known, the Ahwazi freedom activists do not care about the risks posed by the Iranian regime.”

“Our second home is prison,” they added.

Experts told Ahwaz Monitor that the campaign is of the utmost importance, saying efforts should be intensified to expose the Iranian regime’s atrocities.

Ahwazi activists are enduring a nightmare that no person should ever endure, simply for freedom and democracy and for the human rights which are the birthright of all peoples according to the UN’s Universal Declaration of Human Rights.

Despite everything, Ahwazis assert that they will not abandon their struggle for freedom and justice until they are achieved and the Iranian regime’s crimes are ended and the persecuted prisoners are released from the regime’s prisons, which should be consigned to the same historical infamy as the Nazi concentration camps.