The Persian New Year At The Spring Vernal Equinox In Iran

The flower buds of yellow, violet, red and white crocuses of saffron bulbs, intermingled with the blossoming daffodils, hyacinths, tulips and the Persian violets, herald the arrival of Nowruz. The Persian New Year, signaling the rebirth, rejuvenation and reconciliations, appropriately arrives on the spring vernal equinox. Spring in Iran and the wider region is the harbinger of jubilation with the flowing pristine streams percolating down the snowcapped mountains, the greening of the prairies and pastures, the flowering of fruit trees, and the luscious green germinating of staple crops. Hence, it is surmised that the Nowruz celebration must have been observed at one level or the other since the inception of agriculture and domestication of animals of as far back as 10,000 years ago on the Iranian Plateau stretching between the Caspian Sea and the Persian Gulf, Mesopotamia, the Caucuses, and Central Asia. This is reflected in the mythological story of King Jamshid the first Nowruz celebrant of Pishdadian Dynasty, & as cited in (Paradiso) Ferdowsi’s Shahnameh, the epic 30,000 Poem Book of the Persian Kings. Hence, in Paradise, Ferdowsi has eternally resided since. 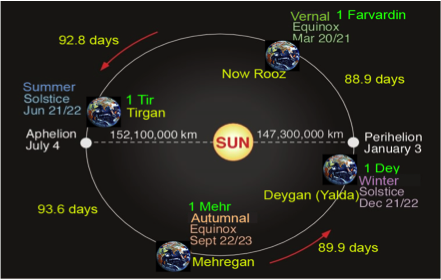 Nowruz (جشن نوروز) aka Norooz, Navroz, NowRooz et. al. (diverse dialectic pronunciations) in Persian literally translates to the first day [of the New Year]. It is the most prominent seasonal celebration of the solar calendar that has persisted since prehistoric era. It was conceived by the agricultural people north of the Tropic of Cancer who have revered the sun (Sol Invictus,) and fire and light ever since. This contrasts with lunar calendars as followed by the southern and western neighbors of Iran. In addition to Iran, Nowruz as a national holiday transcending class, color, creed, ethnicity, race, religion, or national origin, is currently commemorated by well over a dozen countries of nearly five hundred million inhabitants in central, south and west Asia, northwestern China, Asia Minor, and the Caucuses. 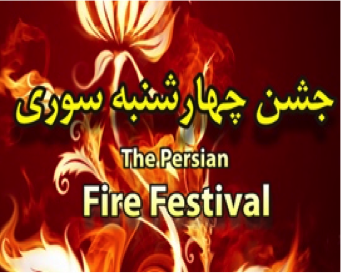 In fact, the commoners and serfs in Europe and later the pilgrims landing on Plymouth Rock in today’s Massachusetts also observed a New Year beginning at the beginning of spring until the mid-18th century. This jubilees holiday was acknowledged in the Gregorian calendar as well; the month of March coincides with the first month of the Julian calendar when Europe was still under the influence of Persian Mithraism from the 1st through the 4th centuries CE. Nowruz, according to the Zoroastrian Mazdayasni calendar is at 3757. Nowruz commences with the prelude festival of Chaharshanbe Suri on the last Tuesday night of the exiting year. At this Zoroastrian fire ritual, everyone jumps over fire, singing a Middle Persian poem that translates as…

“O’ sacred Fire, take away my yellow sickness and give me in return your healthy red color!”

The most symbolic manifestation showcased at Nowruz is the sofreh haft-seen. Onto a table covered with an antique hand-woven termeh silk cloth are laid seven plant-derived items whose Persian names begin with the letter “S”: sabzeh- wheat and lentil germinations symbolizing rebirth; senjed– the dried fruit of the oleaster tree symbolizing love; seer-garlic symbolizing medicine; seeb-apples symbolizing beauty and earth; somaqh-sumac berries symbolizing sunrise; samanu– cooked germinated wheat for affluence, and serkeh-vinegar symbolizing ripeness, longevity, and perseverance. A round, ticking clock, signifying the passage of time, a fishbowl with two gold fish (added later, due to influences from China) signifying companionship and life, decorated eggs for fertility, and a saucer of coins from the five continents to reflect prosperity are also on display. The haft-seen table is completed with daffodils, tulips and hyacinths, a triple flag of Iran’s colors green, white, and red flickering candelabra and an ancient book of poems, Ferdowsi’s Shahnameh the Persian epic book of the Kings, Rumi’s Mathnawi, Divan Hafez, or the Omar Khayyam’s Quatrains, illustrated by the poem The Nightingale Bemoans. In the U.S., presidents release annual Nowruz best wishes message and in recent years an all-day extravagant Nowruz celebration that concludes with Persian music and dance and exquisite Persian food has been in the past hosted at the White House. The UN has for some time declared the International Day of Nowruz. Spring vernal equinox 2018 is also rightly declared as the International Forest Day!

The celebration of Nowruz by 5000 Iranians abroad before 1979 is now commemorated by 5 million in diaspora, where in every major city as New York, there are hundreds of Nowruz congregations, each with 100-1,000 guests, to choose from. Among the several we have attended for decades each year, the grand one with 600 guests and organized and hosted by Mehrangiz and Isfandiar Sayadi at the Sheraton Hotel in Mahwah, New Jersey with its most exquisitely expansive sofreh haft-seen and highly inclusive dance and music has remained dour most favorite! It is serendipitously fortuitous that their noble Persian names means the one who pushes the last old month of the year behind, while she heralds the reverence of the loving sun forward! The nostalgic music and dance from every corner of Iran and south/west Asia including Armenian, Jewish, Tajiki, and of course America will abate any preference for the best Persian food for the night!

Anchored on trilogy of good thoughts, good words and good deeds, everyone reaffirms their commitment to by one or more of the following virtues, namely, to volunteerism, altruism, philanthropy, benevolence and above all, to advancing humanism as the pinnacles of life. The belief in the golden rule of “treating others as you would expect to be treated” anchored on the tripartite pedestal of good thoughts, good words and good deeds, conjures up in mind with the acclaimed Persian poem by the 13th century Sa’adi:

All humans are members of one frame,
Since all at first, from the same essence, came.
When by hard fortune one limb is oppressed,
The other members lose their desired rest.
If thou feel’st not for others’ misery,
A human is no name for thee. 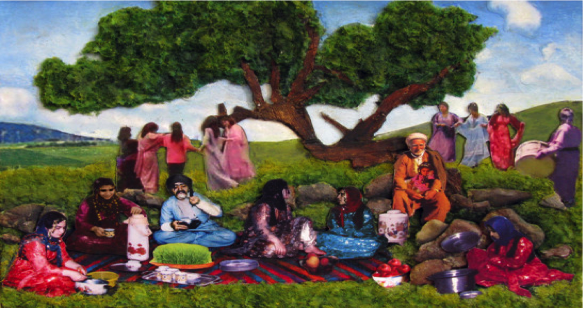 A Nowruz holiday cycle is concluded at the Sizdah Bedar Picnic (at bear Mountain State Park in New York) which falls on the 13th day, aka April Fool’s Day. Every family spends the full day outdoor in parks, crop fields, or the orchards, when they play, sing, dance, eat and drink. Unmarried celebrants tie knots with grass blades to wish for a soulmate; the elders nostalgically compare this Nowruz with those past while remembering the deceased, and the children look forward restlessly to many more Nowruz celebrations to follow.