All The Times John Bolton Called For War With Iran

The fact that Donald Trump’s recent hawkish stance on the Syrian government coincided with John Bolton’s first day as national security advisor is most likely no accident. Syria and Iran have been bound by a mutual defense treaty for some time, and there are a significant number of Iranian military advisors and Iranian-supported militia on the ground in Syria for that very reason.

People like Bolton know this all too well, which is why Syria was targeted so heavily for regime change in the first place. This is from the Hillary Clinton email archives:

“Iran’s nuclear program and Syria’s civil war may seem unconnected, but they are. For Israeli leaders, the real threat from a nuclear-armed Iran is not the prospect of an insane Iranian leader launching an unprovoked Iranian nuclear attack on Israel that would lead to the annihilation of both countries. What Israeli military leaders really worry about — but cannot talk about — is losing their nuclear monopoly…Bringing down Assad would not only be a massive boon to Israel’s security, it would also ease Israel’s understandable fear of losing its nuclear monopoly.” [emphasis added]

Bolton, who can boast on his illustrious political CV his overwhelming support for the invasion of Iraq, wants to see done to Iran what he proudly advocated for in Iraq.

In 2015, Bolton wrote a New York Times op-ed entitled “To Stop Iran’s Bomb, Bomb Iran.” In this article, Bolton makes it quite clear that “only military action” could accomplish what is required to stop Iran from developing a nuclear weapon.

Never mind that the Joint Comprehensive Plan of Action (JCPOA) formed in 2015 has been working to curb any international fears of an Iranian nuclear program. Both the Trump administration and the International Atomic Energy Agency (IAEA) have found that Iran has been compliant with the terms of the agreement. According to these assessments, Iran has dismantled thousands of its centrifuges and moved as far away from building a nuclear weapon as is possible, yet people like Bolton are still not content.

Reportedly, in October last year, Bolton spoke to Sheldon Adelson, a very powerful pro-Israel casino magnate with ties to Trump to get Trump’s ear regarding his stance on the JCPOA. Bolton was then able to speak to Trump by phone after meeting with Adelson. According to Politico, Bolton advised Trump prior to delivering an anti-Iranian speech in October to include a line that Trump reserved the right to scrap the JCPOA entirely, despite chief of staff John Kelly limiting Bolton’s contact with Trump.

In January 2017, Bolton went on Fox News to denounce the nuclear deal stating that it was a “strategic mistake.” In July 2017, speaking at the National Council of Resistance of Iran’s “Free Iran Gathering” in Paris, he also called for regime change as the only viable solution and that this should be America’s “declared policy”, alleging that Iranian President Hasan Rowhani cannot be trusted. In doing so, Bolton was heavily supporting the Mujahedin-e Khalq (MEK), a group that not too long ago was actually designated as a terrorist entity by the United States. The MEK is even believed to be behind the deaths of American civilians in Iran in the infamous 1980 U.S. embassy siege. 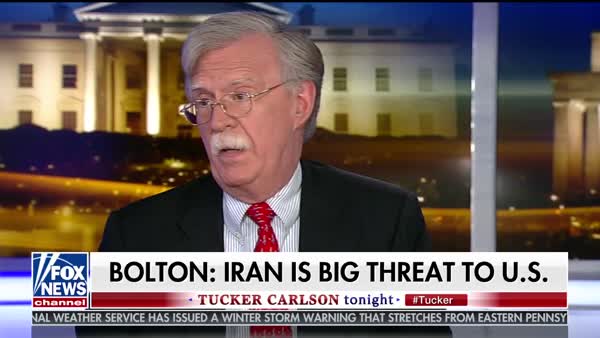 According to the Intercept, the Iranian expatriate journalist Bahman Kalbasi noted that Bolton concluded his address to the MEK exiles by stating: “And that’s why, before 2019, we here will celebrate in Tehran!”

In October 2017, he again went on Fox News to lambast the JCPOA, claiming that Iran is violating the Non-Proliferation Treaty. At around the same time, he also wrote an op-ed for the Hill in which he claimed “the real issue is how much worse Iran’s behaviour will be once it gets deliverable nuclear weapons.”

When protests rocked Iran shortly after the heralding of the 2018 new year, Bolton went on Fox News and openly called for America’s goal to be regime change in Iran.

In an op-ed for the Wall Street Journal at the beginning of this year, Bolton condemned the 2015 nuclear deal with Iran as a “massive strategic blunder” before making one of his most disturbing announcements.

America’s foreign policy “should be ending Iran’s 1979 Islamic Revolution before its fortieth anniversary,” being next February, he wrote. “Recognizing a new Iranian regime in 2019 would reverse the shame of once seeing our diplomats held hostage for four hundred and forty-four days. The former hostages can cut the ribbon to open the new U.S. Embassy in Tehran.”

During his tenure as the Bush administration’s policymaker on Iran from 2002 through 2004 Bolton actively established the political conditions required to carry the United States into a war with Iran. As investigative reporter Gareth Porter explained, Bolton began laying the ground work for a war with Iran by using Vice President Dick Cheney’s backing to make a series of trips to Israel in 2003 and 2004 without the required clearance from the State Department.

Bolton and his impressive career as a prolific warmongering liar makes him no ordinary war-hawk.

Shortly before the 2003 invasion of Iraq, Bolton reportedly told Israeli officials that once Hussein was removed from power, it would then be necessary to deal with Syria, Iran, and North Korea afterwards (a common theme in Bolton’s discourse ever since).

Bolton even met with the head of Mossad at the time, Meir Dagan, without the required reporting cable to the secretary of state. The Mossad, as we know, has a very anti-Iranian stance, having openly conducted assassinations on Iranian soil.

At around this time, Bolton began openly accusing Tehran of developing a nuclear weapons program. As he outlines in his 2007 memoir, his goal was to ensure that the Iranian nuclear issue would not take place under the guise of the IAEA but instead move to the U.N. Security Council instead. According to Porter:

“Bolton’s strategy was based on the claim that Iran was hiding its military nuclear program from the IAEA, and in early 2004, he came up with a dramatic propaganda ploy: he sent a set of satellite images to the IAEA showing sites at the Iranian military reservation at Parchin that he claimed were being used for tests to simulate nuclear weapons. Bolton demanded that the IAEA request access to inspect those sites and leaked his demand to the Associated Press in September 2004. In fact, the satellite images showed nothing more than bunkers and buildings for conventional explosives testing.” [emphasis added]

Bolton and his impressive career as a prolific warmongering liar makes him no ordinary war-hawk. In fact, for the reasons explained above, Bolton is a man so dangerously hawkish that at the time of his announced appointment, this development received open warnings from even pro-war outlets including The Washington Post, The New York Times, The Huffington Post, The Guardian, Vice News, Vox, and Foreign Policy magazine.

Of course, we now understand why.