US Officials: Israel Preparing For War With Iran, Seeking US Support

Not that there was much doubt who was behind it, but two days after “enemy” warplanes attacked a Syrian military base near Hama on Sunday, killing at least 11 Iranians and dozens of others, and nobody had yet “claimed responsibility” the attack, US officials told NBC that it was indeed Israeli F-15 fighter jets that struck the base, NBC News reported.

Ominously, the officials said Israel appears to be preparing for open warfare with Iran and is seeking U.S. help and support.

“On the list of the potentials for most likely live hostility around the world, the battle between Israel and Iran in Syria is at the top of the list right now,” said one senior U.S. official.

Ominously, the officials said Israel appears to be preparing for open warfare with Iran and is seeking U.S. help and support.

“On the list of the potentials for most likely live hostility around the world, the battle between Israel and Iran in Syria is at the top of the list right now,” said one senior U.S. official. 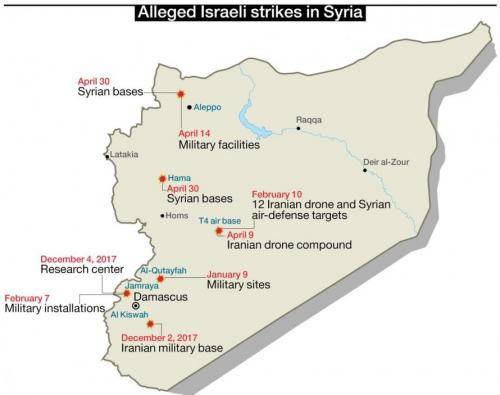 Meanwhile, as we reported yesterday, the Syrian army said early on Monday that “enemy” rockets struck military bases belonging to Syrian President Bashar Assad’s regime. According to several outlets, the strikes targeted the 47th Brigade base in the southern Hama district, a military facility in northwestern Hama and a facility north of the Aleppo International Airport.

Meanwhile, Defense Minister Avigdor Lieberman said on Tuesday that Israel on Tuesday morning had four problems, one more than the day before: “Iran, Iran, Iran and hypocrisy.” The comment came one day after Israel PM Benjamin Netanyahu “revealed” a cache of documents the Mossad stole from Iran detailing the country’s nuclear program, which however critics said were i) old and ii) not indicative of Iran’s current plans.

“This is the same Iran that cracks down on freedom of expression and on minorities. The same Iran that tried to develop nuclear weapons and entered the [nuclear] deal for economic benefits,” Lieberman said.

“The same Iran is trying to hide its weapons while everyone ignores it. The state of Israel cannot ignore Iran’s threats, Iran, whose senior officials promise to wipe out Israel,” he said. “They are trying to harm us, and we’ll have a response.

Iran’s Defense Minister Amir Khatami threatened Israel on Tuesday, saying it should stop its “dangerous behavior” and vowing that the “Iranian response will be surprising and you will regret it.” Khatami’s remarks came Following Netanyahu’s speech which Khatami described as Israeli “provocative actions,” and two days after the strikes in Syria.

Meanwhile, in a potential hint at the upcoming conflict, Haaretz writes that two and a half weeks after the bombing in which seven members of Iran’s Revolutionary Guards were killed at the T4 base in Syria, Israel is bracing for an Iranian retaliation for the Syrian strikes (and if one isn’t forthcoming, well that’s what false flags are for).

As Haaretz writes, the Iranians’ response, despite their frequent threats of revenge, is being postponed, screwing up Iran’s war planning. It’s also possible that as time passes, Tehran is becoming more aware of the possible complex consequences of any action. Still, the working assumption of Israeli defense officials remains that such a response is highly probable.

The Iranians appear to have many options. Revenge could come on the Syrian border, from the Lebanese border via Hezbollah, directly from Iran by the launch of long-range missiles, or against an Israeli target abroad. In past decades Iran and Hezbollah took part, separately and together, in two attacks in Argentina, a suicide attack in Bulgaria and attempts to strike at Israeli diplomats and tourists in countries including India, Thailand and Azerbaijan.

In any case, Lebanon seems all but out of bounds until the country’s May 6 parliamentary elections, and amid Hezbollah’s fear of being portrayed as an Iranian puppet. The firing of missiles from Iran would exacerbate the claims about Tehran’s missile project a moment before a possible U.S. decision on May 12 to abandon the nuclear agreement. Also, a strike at a target far from the Middle East would require long preparation.

For now, an Israeli war with Iran in Syria is far from inevitable: the clash of intentions is clear: Iran is establishing itself militarily in Syria and Israel has declared that it will prevent that by force. The question, of course, is whether this unstable equilibrium will devolve into a lethal escalation, or if it will somehow be resolved through peaceful negotiation. Unfortunately, in the context of recent events, and the upcoming breakdown of the Iran nuclear deal, the former is looking like the most likely outcome.