Assad In A Secret Message To Putin: Israel Has Exhausted Our Patience And Iran Will Stay In Syria As Long As Needed

The Syrian president Bashar al-Assad has communicated to the Russian leadership that “Israel has exhausted our patience” … “Israeli jets will be a legitimate target for our defense systems if Tel Aviv doesn’t cease its provocation and stop targeting our military positions and jets”. According to decision-makers, “Assad has no intention of asking Iran and its allies to leave the Levant as long as any Syrian territory is occupied”. Assad has included the Golan Heights in ‘all occupied Syrian territories’, as well as the north of Syria where the Turkish and the US forces, unlike the those of Iran, are present without the consent of the Syrian government.

Moreover, according to the source, “Assad believes that the Syrian government will not be tamed by offers presented by Russia for a plan which would propose the return of all refugees, so as to be able to run the forthcoming elections over the entire Syrian territory and the reconstruction of Syria by the international community in exchange for an Iranian withdrawal. However, the implementation of UN resolution 242 (1967)  (withdrawal of Israeli armed forces from territories occupied in the recent conflict) and the respect of Syrian sovereignty (cessation of Israeli violations of Syrian airspace) is the right path for the withdrawal of all forces from Syria, including those of Iran”, said the source.

Russia is trying to create stability in the Levant, considered a permanent base for its forces and an essential platform for a much larger economic future and link to the world. Tass news agency said Russian Foreign Minister Sergey Lavrov and Chief of the General Staff Army Valery Gerasimov “visited the Israeli Prime Minister Benjamin Netanyahu to discuss issues concerning the Syrian conflict”. The two-hour meeting is part of the pre-organised exchange of visits established during Netanyahu’s last visit to Moscow where he met the Russian President Vladimir Putin.

Russia is caught between two tough countries, Syria and Israel, where their respective leaders do not give anything away without a hard bargain. However, seeking an Israeli withdrawal from the occupied Golan Heights is an impossible task for Putin, particularly with Netanyahu in office. Therefore, it is most likely that Israel will continue violating the Syrian airspace and bomb targets randomly. In exchange, it is also expected that Russia will watch happily the Syrian army responding to those expected Israeli attacks- with the (slim) hope to bring both parties to make concessions over their respective demands.

The following day, on the 24thof July, Israel launched a patriot missile against a Syrian Su-22M4 jet while bombing ISIS in south Quneitra. This is considered a clear violation of the 1974 agreement that “permitted Air Forces of the two sides (Syria and Israel) operate up to their respective lines without interference from the other side”. Israel – feeling strong with the US support and believing Russia is on its side – is provoking, and challenging, the Syrian army. Damascus is expected to wait for the appropriate moment to fire against Israeli settlements or cities- once the south of Syria is cleared from ISIS, or perhaps when the opportunity arises.

Moreover, the Syrian military development centers spread over the territory aim to manufacture middle and long-range missiles, benefitting from the long experience gathered in seven years of war and from the development by Syria’s allies of new warfare technology.

Sources within the Syrian leadership said “Damascus has defense and cooperation agreements with several countries. Therefore, developing its arsenal is part of the military plan to defend its territory against any outside aggression”.

Sources internal to Syria’s allies said the following: “Iran managed to deliver to Hezbollah tens of thousands of missiles of all calibers. The most precise and accurate missiles have been delivered already and will be used if ever Israel decides to attack Lebanon. Therefore, preventing Syria from developing its arsenal is an unrealistic and idiotic idea”.

The Israeli officials have raised the question of the long-range weapons Syria has developed for over a decade- it continues to do so. “This demand is obviously impossible to meet regardless what Israel can offer in exchange, even if the occupied Golan Heights is on the negotiation table. Hezbollah has these missiles in its arsenal and has managed to create a balance of power with Israel- it stopped the Israelis during the second war in 2006. Syria’s sovereignty is at stake and without precision missiles, Syria becomes weak. Israel doesn’t negotiate with weak countries”, said the source.

Assad’s message is very clear and he is determined to stop the future Israeli aggression, indicating his continuing readiness to respond in spite of the Russian request to “bring down the level of tension with Israel”. According to Assad, “the security and the protection of Syria comes before the relationship with our strategic Russian ally. The Syrian government will not abide by self-control policy unless Israel stops bombing military targets in Syria”. Assad will reject any Russian request for self-restraint if Israel continues provoking the Syrian army.

During the seven years of war imposed on Syria, Israel carried out over 100 attacks against the Syrian army positions in various parts of the country. It has also supported militants and jihadists by providing military and intelligence support, logistics and medical services. The Syrian army limited itself to intercepting as many missiles as possible and has shot down two jets on one occasion (Israel recognized only one) over the occupied Golan Heights, during their raid.

During Netanyahu’s last visit to Moscow – according to top decision-makers in Syria – the Israeli prime minister said his army “has the intention of attacking ISIS, al-Qaeda and other jihadists and militants in the south of Syria all along the 1974 disengagement line and advance into Syrian territory to create a buffer zone”. The Israeli prime minister wanted Putin’s approval of the plan, and in consequence, the acknowledgment of the Israeli permanent occupation of the Golan Heights. Any future negotiation between Syria and Israel would then concentrate on the newly occupied territory and no longer the one occupied during the six-day war in 1967 and annexed in 1981.

President Putin – said the source – responded that “Russia can guarantee that Iran and its allies will not fire one single shot beyond the 1974 disengagement line during the liberation of southern Syria. This line is approved by the UN, therefore will be respected. However, if Israel decides to push its army beyond this line, it would be the biggest gift you are offering to Iran and its allies and a valid reason to attack you. I’ll pull my forces out of the south and leave you with your unsuitable ideas”. 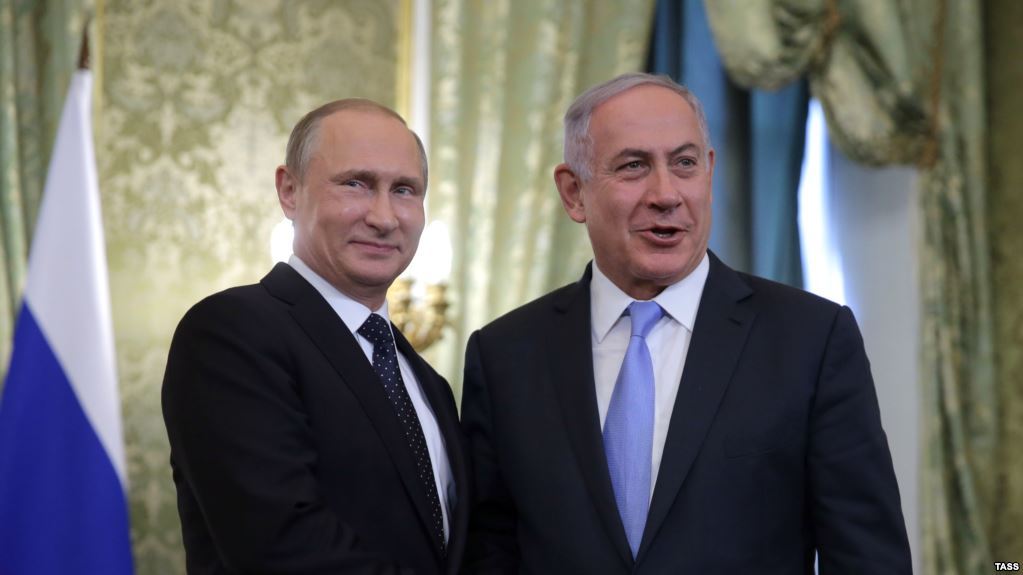 Netanyahu considered President Putin as a great friend of Israel because he engaged himself in preventing any attack beyond the 1974 disengagement line, while President Assad considers Putin has won over both Netanyahu and President Donald Trump by recognizing the 1974 disengagement line. This means Russia didn’t give Israel and the US anything at all. It limited itself to recognizing the established line, thus, any future negotiation to reach the recovery of the occupied Golan Heights will begin from this line.

Assad has won over all the countries who “did their best” – offering tens of billions of dollars, investing in intelligence, sending proper troops, opening the road to jihadists from all over the world – just to bring him down! But the regime held together, compact and strong, and came out stronger than ever, with unrivaled military experience. Assad, therefore, will have no qualms when he decides to respond against Israel, in due course.

By liberating the south, Syria will be faced with two occupation countries, the USA and Turkey. There will no longer be dozens or even hundreds of groups and organizations paid by different foreign countries for their confrontation. Therefore, when Assad says “my patience is coming to an end” he means firing against Israeli jets will not be difficult and that his allies, Iran and Hezbollah, will be more than happy to support him.

And lastly, Assad is part of the “Axis of the Resistance” and the year 2018 no longer resembles the 2000’s, before Assad joined the axis. Then, the international community and the Arab countries offered the Syrian president many concessions and financial support to stop the flow of weapons from Iran to Lebanon via Damascus and the harbor of Latakia. At a certain point, Assad told Hezbollah that he wouldn’t deliver to the Americans but wouldn’t stand in the way.

Today, following seven years of war, Syria has selected its friends and its allies. Iran and Hezbollah are part of Syria and their destiny is linked to the Levant. They have offered finance, logistics, oil, men, and thousands of killed and wounded to keep Syria united. That Assad can never forget.

Russia is, on the other hand, Syria’s ally and they have a mutual interest in the stability of the Levant. It also has interests with Israel, with the US and with the Gulf countries who played an important role in the seven years of war in Syria. However, Putin managed to swallow the Turkish provocation in 2015 when the Turkish defense system shot down a Russian Sukhoi while in operation against jihadists in rural Latakia. Will he now accept Netanyahu’s continuing challenge to the stability of Syria, accepting and believing he can negotiate under fire?

When Putin throws a football to Donald Trump during the Helsinki meeting this month and here throws the ball to Netanyahu to decide, is he stopping his incursions into Syria or is he encouraging escalation?

PrevPreviousRIP To The Liberal Order
NextNew Caspian Accord Resolves Some Issues, Not AllNext