“The Ruling Elite Has Long Believed That America Has Been Chosen By History To Guide The World.”

Mohsen Abdelmoumen: Israel continues to massacre the Palestinian people with the utmost impunity. Is not Israel a rogue state?

Sheldon Richman: That would depend on your definition of “rogue state,” about which I would not expect broad agreement. I’d prefer to analyze the Israeli government’s conduct without looking for a contentious label. The policies and conduct of Israel’s government toward the Palestinians are systematically unjust and brutal. And I believe those things are inherent in the Zionist philosophy of Israel as the State of the Jewish people everywhere rather than the state of all its citizens regardless of religion or supposed ethnicity or race. The original Reform Jewish movement agreed with what I just said. The treatment of the Palestinians in the West Bank and Gaza qualifies as apartheid since the individuals there have no rights whatever. They exist, as though they were subhuman, at the mercy of Israel.

How do you explain the weight of the Zionist lobby in the western media and US in particular?

The Israel Lobby is one of the most influential lobbies in America, first, because it can make a lot of money and other assistance available to political candidates and, second, because Americans, who tend to be historically illiterate, have a lot of justifiable goodwill for people who are Jewish. That’s entirely understandable in light of the Holocaust perpetrated by the Nazis and the general oppression of Jews in Europe for centuries. Part of the Lobby’s influence stems from a rational fear of being branded an anti-Semite for criticizing Israel’s conduct, although this fear, I’m glad to say, has faded in recent years.

Why, in your opinion, all those who protest against Israel’s criminal policy are classified as anti-Semitic?

Israel’s partisans in the US, the UK, and elsewhere have long worked to inoculate Israel against any criticism by cynically conflating such criticism with anti-Semitism. It’s been an effective strategy: Israel’s partisans believe or profess to believe that Judaism and Zionism are one and the same — despite vociferous objection to that idea by Reform and Orthodox Jews — and the partisans project this premise on people who do not subscribe to it. Then, when someone critiques Zionism or Israel, he is accused of critiquing Judaism or Jews — even if the critic himself does not believe Judaism and Zionism are one and the same. For obvious reasons, this is an utterly illegitimate rhetorical move. A critic of Israel may make a sharp distinction between Judaism and Zionism, Jews and Zionists — many Jews have long insisted on that distinction — but the Israeli partisan nevertheless pretends that the critic of Zionism or Israel also means to criticize Jews or the religion itself. This is outrageous, and one of my missions is help expose and rid the public debate of what I call the invidious conflation. There is no reason for anyone to view criticism of Israel as presumptively anti-Semitic. And the renewed effort to redefine anti-Semitism as including anti-Zionism — which is which is going on in the US, the UK, and elsewhere — must be debunked as an opportunistic fraud. It is simply illogical to believe that, because some critics of Israel are anti-Semites — anti-Semitism remains a fringe phenomenon in the US and the UK — any particular critic of Israel is an anti-Semite and criticism of Israel is evil per se.

How do you explain Israel’s influence on the US policy decision?

The Israel Lobby is one reason, but only one. Many US policymakers have seen Israel as a strategic ally in the Middle East versus Iran and Russia. The Trump administration clearly sees Israel and Saudi Arabia as vital parts of an anti-Iran coalition. I believe that an Israel which violates the standards of universal justice is not, in fact, a strategic ally of the American people.

Why is the United States persisting to be a hegemonic power and refuse the advent of a multipolar world?

The American ruling elite has long believed that America has been chosen by history to guide the world. This belief stretches back to the country’s founding. So, on this view, guaranteed access to resources worldwide is imperative and nonaligned countries must be marginalized lest they set bad examples for others. This strain of American nationalism, which often masquerades as multilateralism, lines up nicely and not coincidentally with the best-connected economic interests in America, the arms makers, for example.

I believe that an Israel which violates the standards of universal justice is not, in fact, a strategic ally of the American people.

In your opinion, why Trump wants to bring down the Iranian government?

Part of his motive is to please Israel and Saudi Arabia so they will cooperate with him on other things, such as the ill-conceived “war on terror.” I can’t read his mind, so I can’t say why he would otherwise embrace animus toward Iran.

Can we talk about morality in politics when we see the Yemeni people being slaughtered by Saudi Arabia, the strategic ally of the United States?

There is no morality in politics, so what’s to talk about? What’s happening in Yemen is an atrocity, a genocide, to which the Trump administration, like the Obama administration before it, is an accomplice. Shamefully, the US media — conservative and “liberal” — have little time for it. Trump is a party to a war in Yemen in the complete absence of constitutionally required congressional authorization. If Democrats want to impeach him, Yemen, not Russia, is where they should look. But most Democrats are as fully committed to the American Empire as the Republicans are.

Your book America’s Counter-Revolution: The Constitution Revisited is a remarkable historian’s work. Can we say that the United States is based on a lie? 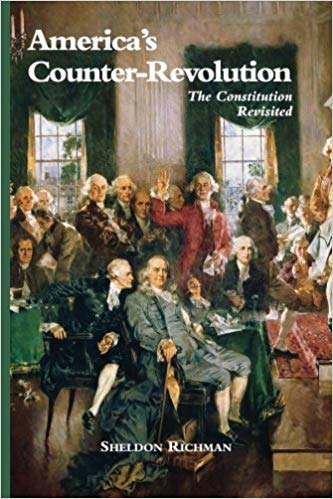 Thank you. The story that teaches that the Constitution was intended to limit government power is folklore designed to create allegiance. The Constitution’s main goals were in fact to create a consolidated state out of the individual states and to contain democracy by shifting power to elites. The national quasi-government that existed under the previous Articles of Confederation, extraordinarily, had the power neither to tax nor to regulate trade. The national government set up under the Constitution had both powers. The Constitution concentrated power. While local power can always be dangerous, concentrated, centralized power is more dangerous because, in the case of local power, one can at least vote with one’s feet far more cheaply. That in itself helps check power. Unlimited democracy is indeed a problem for anyone who values individual liberty, but the solution is not concentrated power for elites. So there’s a sense in which the American people have been lied to from the beginning—they’ve been sold a story about limited government and individual freedom, legitimated by a Constitution that’s actually designed to consolidate state power.

According to our information, the United States has installed missile launchers in northern Syria demonstrating that they do not want to leave the area. Why did not US imperialism learn the lessons of history regarding its criminal interventions in countries ranging from Vietnam to Iraq, through Korea, Libya, Syria, etc.?

The elite has had no incentive to learn those lessons because intervention, war preparation, and war itself augment the elite’s power, prestige, and wealth. As the late Marine Maj. Gen. Smedley Butler said long ago, “War is a racket.”

You are a left activist and a committed man. What about the American left today?

My leftist politics are distinctive because, unlike some of my allies on the anti-imperialist, anti-corporatist left, I believe that cooperation through market relationships, like other cooperation, fosters liberation rather than oppression. I favor individual freedom for everyone, including the right to one’s justly acquired land and other possessions and the right to trade with others worldwide on freed markets unencumbered by government privilege and impediment. Some leftists look to the government to save us from elite mischief; I believe the government is the prime enabler of elite mischief. It will consistently and predictably favor the well-to-do and well-connected to the detriment of everyone else. My own leftist commitments link me with the American individualist anarchist movement of the late 19th and early 20th centuries, personified by Benjamin Tucker, which saw itself on the left. That movement understood that radically freed markets were essential to the complete liberation of workers, women, and oppressed minorities.

About the left generally, it is badly divided. One part opposes war, empire, and corporatism no matter who’s in office, but another keeps quiet about those things when a Democrat — I’m thinking of Obama — is in office — as long as his or her rhetoric includes “progressive” buzzwords. It is disheartening to see left-of-center political figures and pundits promoting belligerence toward Russia, North Korea, and Iran, or praising the NATO alliance, simply because that stance puts them in opposition to Donald Trump. Trump, to be sure, is horrible on trade, immigration, the military, intervention, and many other matters. But why in the world would we want to discourage him from the few actions he’s undertaken that would reduce the risk of war?

The American left must recommit itself to peace, to non-intervention, and to open trade and to immigration. Our only hope for radical reform is the broadest possible coalition dedicated across the board to individual freedom, social cooperation, toleration, and cosmopolitanism.

Who is Sheldon Richman?

Sheldon Richman is the executive editor of The Libertarian Institute, senior fellow and chair of the trustees of the Center for a Stateless Society, and a contributing editor at Antiwar.com.He is the former senior editor at the Cato Institute and Institute for Humane Studies, former editor of The Freeman, published by the Foundation for Economic Education, and former vice president at the Future of Freedom Foundation. His latest book is America’s Counter-Revolution: The Constitution Revisited.