Fernando Pessoa was born in Portugal in 1888. A year before he died,  Message, was published. It was a patriotic collection of poems in three cycles. A year later when he died, age 47, (from an alcohol-related disease) he left behind a large trunk full of handwritten and typed manuscripts. It is estimated there were around 20,000 to 30,000  sheets of manuscripts in his trunk. After some examinations, it was given to the national library to sift through for further critical evaluation. 47 years later, after painstakingly going through the papers his first prose book was published. The Book of Disquiet is considered by some to be among the best 100 works of literature.

Pessoa left university in protest against the way it was run during the political upheavals in Portugal.  Later Pessoa was banned by the Salazar regime, after he wrote in defense of Freemasonry. Pessoa had an unfathomable spiritual side. He defended everyone’s rights to their spiritual path and he detested the monopoly the Catholic church had on religion in Portugal. In his politics he oscillated between monarchism and republicanism and finally thought the best thing for the future of Portugal was a republic.

There are some striking similarities between Sadeq Hedayat and Pessoa. Despite their inner struggles with their demons which finally brought them down at an early age, they left a lasting legacy. They were fluent in French and worked as translators.  Neither of them was able to settle down or marry.  They worked for various big firms but never stayed in one job. They often faced financial hardship. They were not only unapologetic about their countries’ imperialist past but very proud.  And they shared the same deep admiration for the Rubāʿiyāt of Omar Khayam which formed some of their philosophy/cosmology, although, they may have had somewhat different interpretations of its message. 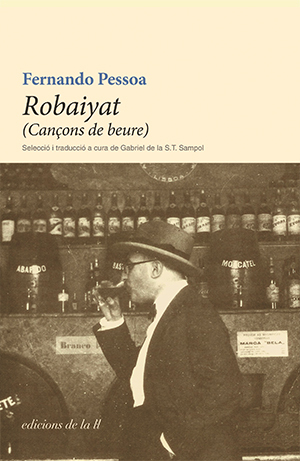 After his quatrains were sieved out of the massive bundle of writings a book of rubāʿiyāt was put together and published. Part of understanding Pessoa is to understand his fondness not just for Khayam’s poems but the format of the quatrain which he liked and used to write his own rubāʿiyāt and express his deepest thoughts and feelings.

Pessoa was also the inventor of a literary term, heteronym. His three chief heteronyms are Alberto Caeiro, Ricardo Reis and Alvaro de Campos. Regarding his heteronyms George Steiner says,

“Pseudonymous writing is not rare in literature or philosophy (Kierkegaard provides a celebrated instance). ‘Heteronyms’, as Pessoa called and defined them, are something different and exceedingly strange. For each of his ‘voices’, Pessoa conceived a highly distinctive poetic idiom and technique, a complex biography, a context of literary influence and polemics and, most arrestingly of all, subtle interrelations and reciprocities of awareness. Octavio Paz defines Caeiro as ‘everything that Pessoa is not and more’.

There was a high price to pay for his creativity. Passoa once said, ‘To create, I’ve destroyed myself… I’m the empty stage where various actors act out various plays.’

Omar Khayam also gets a write-up in The Book of Disquiet:

“Khayam philosophy can be reduced then to a gentle epicurism, honed own to contain only a minimal desire for pleasure. It is enough for him to gaze on roses and to drink wine. A light breeze, an aimless, purposeless conversation, a jug of wine and some flowers, It is in that and only that the wise Persian places his greatest desire….Better then to put a stop to all our desires and homes, to our futile attempts to explain the world, or to any foolish ambitions to change or govern it.”

One of Pessoa’s favorite saying was, “Look, there’s no metaphysics on earth like chocolates.”  Influenced by Khayam, he believed that mystery is at the heart of creation so don’t waste your life trying to understand or know everything or hide behind religious piety; enjoy the life you got and try to be yourself above all.

Pessoa’s own quatrains are sensitive, humane and full of insights.

As big a literary reputation he already has in Portugal and the world; in large part he is still unpublished.

Life is earth, and living it is mud.

Everything is style, difference or manner.

In all that you do be only you.

In all that you do be the whole of you.