Sylvia Anne Terry -Smith was born in London, 1916.  She married to Angus Matheson and later to Henry Schofield with whom she lived in Iran from 1965 to 1979.

Sylvia’s fascination with India began when she was still a child. She saved her pocket money and bought Hugo’s Hindustani in Three Months without a Master at 12 and learned to speak Urdu.

She wrote the first complete book of archaeological guide to Iran, titled, Persia: An Archaeological Guide (1972) with its breathtaking span from10,000 B.C. to the end of Seljuq rule (1194). The book is comprehensive and a pioneering work. A delight for the serious archaeologist and those curious about the subject.

Sylvia’s passion for history and archaeology took her to some of the most remote and uninhabitable corners of Iran where she dug, wrote, studied and photographed anything of archaeological interests. 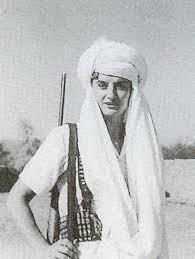 She also travelled extensively in Baluchistan and lived with the Bugti tribe and studied their culture for some years. The result was The Tigers of Baluchistan (1967). Sylvia was assigned a bodyguard  so she could be safe in a volatile and sometimes violent environment.  She was allowed for the first time to film, photograph the people of the Bugti tribe, including the women.

Sylvia Matheson was not deterred by the harshest of climate or hostile surrounding as if she was born and bred in those inhospitable places. She sometimes shared her makesift dwelling with snakes and scorpions. The Bugti tribe later gave her the honorary chieftain title.  It was not the first time that her loyalty and courage was rewarded. During WWII she was also appointed an honorary colonel with the US Military Police of the 88th division – the “Blue Devils” while on special assignment in Venice and Bolzano.

In between digging, travelling in tough terrains and sticking it out in rough mountainous areas of Afghanistan she wrote novels to pass the time.  Max Munday was  her pen name, which was, in fact, her dog’s name. She wrote adventure thrillers and mystery novels, using some of her firsthand experiences.

After the Islamic revolution of Iran (1979) Sylvia and Henry left the country and later travelled to Spain and retired there.  For Sylvia retirement was not easy and she continued to lead tours to all the places she had come to love and write about.