On 12 August 2018, five littoral states of the Caspian Sea (Iran, Russia, Kazakhstan, Azerbaijan and Turkmenistan) signed a convention on the legal status of the Caspian Sea. This convention should be approved by the legislative bodies in all five states before it becomes officially binding.

The Caspian Convention has determined certain important points and at the same time, has made determination of certain other important points contingent on future agreements of the concerned states.

The most important points determined by the Caspian Convention are:

The most important points which are not determined in this convention are: 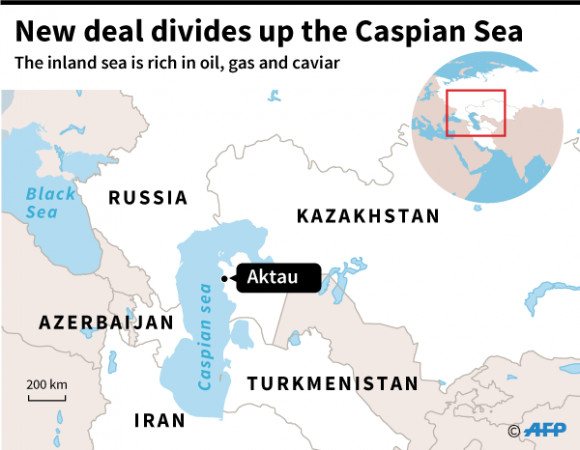 What Iran loses in the new Caspian Convention?

On the other hand, the Caspian Sea and its littoral states can pose a security threat for the regime of Iran. Most of the Caspian littoral states are very interested in having good relations with the Western, especially the US, government and companies. Azerbaijan Republic is an ally of the US and it has very close relations with Israel. In recent years, when the issue of a possible attack against Iran has been discussed, Azerbaijan is named as a possible route for this. Kazakhstan and Turkmenistan attach great importance to the Western companies for development of their resources in the Caspian Sea.

While conflicts between Iran and US is still widespread and peaceful solutions for removing the conflicts are not so promising due to the policies of the Iranian regime (the US and its allies want Iran to stop regional interfering and support of terrorism) , the possibility of confrontation is growing. If this happens, the Caspian littoral states, except then Russia, will be in the opposite side of Iranian regime. For the same reason, the regime in Iran that attaches the highest priority to its survival, is more concerned about the military-security issues in The Caspian Sea, rather than resources in the seabed or even Iran’s share of the whole area.   The regime in Iran has been using every legal and political occasion, to block the presence on non-littoral states, especially the US, in the Caspian Sea, with cooperation of the Russians who have similar worries. Iran and Russia have used all meetings of the Caspian littoral states in the last twenty years or so to put pressures on the other Caspian sates to keep the West out of the region.

The recently concluded Convention on the Legal Status of the Caspian Sea, has not really anything about the most important issue that it was supposed to address: the legal regime of the Caspian Sea or in fact what belongs to whom in the area.. If so, what was the hurry to conclude an agreement which is not solving the problem? The answer is in the chapters of the new convention prohibiting the presence of non-littoral sates in the Caspian Sea and the commitments of the littoral states not to let their territory in the Caspian Sea (without knowing where it is really) to be used for attacking others.

Iranian Majlis (parliament) has to approve this agreement with two thirds majority. There is a possibility that Majlis will not do so. If the leader interferes in favor of the approving the agreement, he will lose more credibility (especially under the present conditions of Iran).