Saudi Arabia’s “explanation for the arbitrary execution of Jamal Khashoggi is just not plausible. No government should accept it,” says U.N. special rapporteur on extra-judicial executions.

“We call BS,” declared CODEPINK co-founder Medea Benjamin on Friday after the Kingdom of Saudi Arabia finally confirmed that Washington Post columnist Jamal Khashoggi was killed in the Saudi consulate in Istanbul—but also claimed he died in “fistfight” gone wrong rather than the widely suspected grisly torture and assassinationby a hit team acting on orders from the highest levels of Saudi leadership.

The Kingdom later updated its explanation, according to a CNN reporter, to say that Khashoggi was killed in a chokehold during a fight. Turkish officials, meanwhile, have alleged to the press that a team of Saudi agents—including a doctor specializing in autopsies—brought a bone saw into the consulate, where they tortured, killed, and dismembered Khashoggi.

Fist fight that ends up with fingers being cut off and body dismembered? That’s quite a #Saudifistfight. We call BS. #JusticeForJamal

Breaking down the past nearly three weeks since Khashoggi, who was a U.S. resident, entered the Saudi consulate in Turkey but never reemerged—despite Saudi Arabia’s initial claims to the contrary—activist and writer Shaun King also called “bullshit” on the official Saudi explanation.

Saudi Arabia’s “explanation for the arbitrary execution of Jamal Khashoggi is just not plausible. No government should accept it or the pretense at investigation,” warned U.N. Special Rapporteur on Extra-Judicial Executions Agnes Callamard. “We need a trustworthy, impartial, and transparent investigation. To identify the killers and the mastermind.”

Democratic Rep. Ted Lieu of California dismissed the Saudi explanation as “ridiculous on its face.”

The Saudi Arabia story that Khashoggi would get into a fist fight with up to 18 Saudis, many of whom are trained killers, is ridiculous on its face.

“The stupidity of the Saudi explanation is mind boggling,” Karen Attiah, global opinions editor for the Post, concluded in a series of tweets. “What I hate about the statement is the use of the passive construction to imply this was an accident. Jamal didn’t just ‘die during a struggle.’ #Khashoggi was killed. By Saudi men. In a consulate. His life was taken from him.”

#Khashoggi was a 60 year old man. What sort of equal “fight" would he have had against 15 other men? And who brings a bone saw to a “discussion”?!

The stupidity of the Saudi explanation is mind boggling….

Critics also condemned the Trump administration’s response to the latest developments. In a statement that journalist Chris Hayes decried as “laughably weak,” Press Secretary Sarah Huckabee Sanders acknowledged the Kingdom’s admission that Khashoggi is dead and that it “has taken action against the suspects.” The Kingdom announced Friday that it has fired five top officials and taken 18 people in custody. 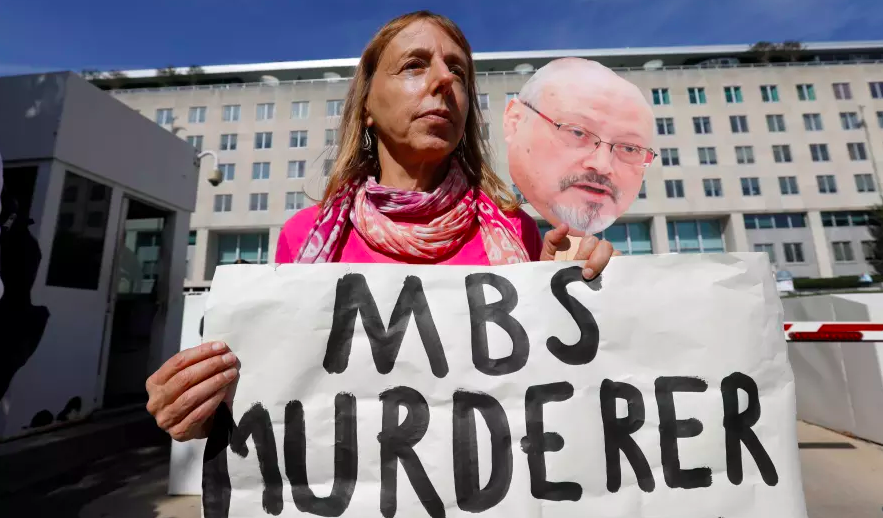 The White House statement also vowed the Trump administration would to “continue to closely follow the international investigations into this tragic incident and advocate for justice that is timely, transparent, and in accordance with all due process.”  U.S. President Donald Trump, however, has been ridiculed for naively accepting denials of any wrongdoing by Saudi royals and ignoring mounting evidence that a team of Saudis murdered Khashoggi.

The president—who also has rebuffed demands that the U.S. cut off arms sales to the Kingdom and military assistance for the war in Yemen in light of Khashoggi’s killing—even has been accused of conspiring with Saudi officials to obstruct justice. Responding to the reports on Friday, filmmaker Michael Moore tweeted: “Of course! KHASHOGGI DIED BOXING! Trump and the Saudi dictator finally have their lying story worked out.”

Asked about Saudi Arabia’s new claims late Friday, Trump told reporters he has confidence in the “fistfight” explanation and called the supposed findings a “good first step.” VoteVets pushed back against Trump’s remarks on Twitter:

Lying about even knowing he was dead, and then shoveling out the biggest load of BS about him dying in a "fist fight" isn't a "good first step," at all.

Saudi Arabia has now set up a commission that is reportedly being led by Crown Prince Mohammad bin Salman, or MbS—the heir to the throne and an accused war criminal known for his cozy relationships with the American elite, including Trump—to overhaul the Saudi intelligence operation. Notably, shortly after Khashoggi disappeared, MbS told Bloomberg News that the journalist had left the consulate unharmed.

Democratic Sen. Chris Murphy of Connecticut—who often has advocated for ending U.S. support for the Saudi-led war in Yemen, which has produced the world’s worst humanitarian crisis—denounced the Saudi explanation as “preposterous” and demanded American action in response to the initial lie that Khashoggi hadn’t been killed, but did not offer further details.

For two weeks, Saudi Arabia has been lying to the world, telling us that Jamal was alive when they knew, the whole time, he was dead.

The new explanation is preposterous, and America’s moral compass has come completely unmoored if we don’t take action.

“The admission by Saudi authorities that Jamal Khashoggi was murdered in their custody plainly exposes all their previous claims about his fate as flagrant lies,” PEN America senior director of Free Expression Programs Summer Lopez said in a statement. “The Saudi regime must not be allowed to hide behind lies in order to literally get away with murder.”

“It is absurd to entrust the investigation of Khashoggi’s murder to those most likely to have ordered it,” Lopez added. “Turkey should call on the U.N. secretary general to authorize an independent, international investigation to expose the truth and lay the groundwork for holding those behind this grievous crime fully responsible.”