The Jewish-Israeli left is in tatters.

They make up just a tiny fraction of the Jewish population of the country, and their numbers have been steadily shrinking since the start of the millennium.

No alliance of progressive parties can hold a candle to Israel’s hawkish governing coalitions. No liberal newspaper can pull the public away from the tabloids that back Prime Minister Benjamin Netanyahu and his rivals even further to the right.

And no upstart activist group has been able to sway the hearts and minds of significant numbers of young Jews, brainwashed with ever-increasing doses of Zionist propaganda.

Top Israeli lawmakers openly incite against leftist figures with frightening regularity, knowing that these attacks will only increase their own popularity among Israeli voters. Even without this egging on, Israeli society is increasingly purging its leftists from positions of influence, as all the Israelis who have lost their jobs in recent years after being outed for their left-leaning views can attest to.

But to grasp the cost that Israeli Jews are forced to pay if they harshly criticize their own government’s racist policies, one need only consider a case reported on earlier this month, that of 58-year-old Guri Mintzer of Tel Aviv. 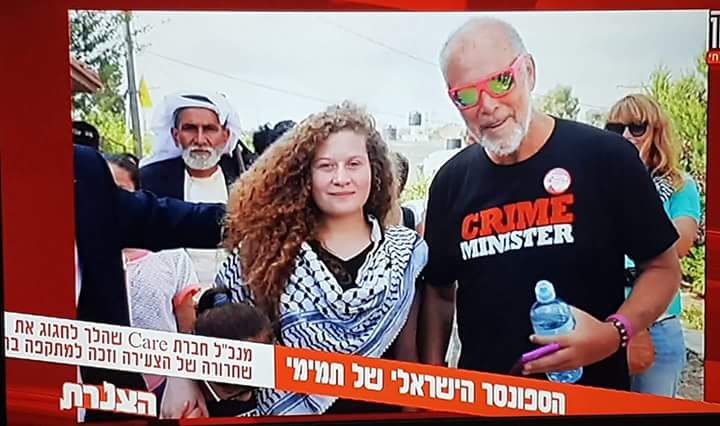 Until recently, Mintzer was on top of the world as the CEO of a medical services firm he started from scratch over a quarter-century ago, today employing hundreds of workers – a so-called Israeli success story.

But when right-wing activists learned that, in a private capacity, he supported Palestinian rights – even paying some of the legal costs of Palestinian activist Ahed Tamimi – they called to punish Mintzer by boycotting his firm.

After a spate of attacks against him, the company’s employees and their property, Mintzer reluctantly sold the firm that was his life’s work. Under duress, he was reportedly forced to sell it off for a price less than its actual worth, by $10m – and possibly several times that figure.

After he did, the new owners of the company staged a photo-op with the far-right ruffian and ruling Likud party member who led the calls to boycott the firm, in order to appease Israelis incensed over Mintzer’s politics.

We need not lose sleep over the fate of Mintzer himself; his net worth is still in the millions of dollars, if not more. But the cost he had to pay is one that few Israeli dissidents can afford. Israel consistently tops lists of OECD countries with high poverty rates, and left-wing activists must also take into account the economic costs of openly opposing the racist nature of the regime.

Though Mintzer’s case is just one extreme example, it speaks to the sad state of the Jewish left in Israel today.

But with local leftists unable to reverse anti-Palestinian public opinion on their own from inside Israel, could they perhaps benefit from intervention by US Jews, the next-largest Jewish community in the world – one perceived to be much more liberal than their own?

Unfortunately for those besieged Israeli leftists, it would seem that the Israeli government already has a significant head start on them, taking the fight stateside, as well. The apparent objective: Crush any US opposition to Israel’s ethno-state, and to those who would build their own white ethno-states in its likeness.

This month, it emerged that a firm led by former high-level Israeli intelligence officials – private spies who had met with Donald Trump Jr, offering to smear his father’s electoral opponents – tried to sell the same set of spy services to a group of pro-Israel donors, offering to target individuals and groups critical of Israeli state racism.

The clandestine meeting had reportedly been arranged by a former executive of the Jewish Federations, which claims to be an umbrella organisation representing US Jews.

In addition, reports published earlier that same week by the Jewish Daily Forward revealed that the federation for San Francisco-area Jews – perhaps the most liberal Jewish community in the continental US – has funnelled huge sums, up to $300m by one estimate, to Jewish supremacist groups and white supremacist groups over the past decade and a half.

Some of these funds were reportedly donated to Israeli organisations that work to ethnically cleanse the country of non-Jews, and to defend the Jews who serve that cause: groups such as Haliba, Honenu and the Hebron Fund. Some of the funds were reportedly donated to US polemicists devoted to defending Israel and attacking its critics, such Frank Gaffney, Pamela Geller, Daniel Pipes and David Horowitz.

However, some of these funds were reportedly donated to groups who work to prevent people of colour from immigrating to the US and Europe, and who have no clear connection to Israel: Groups such as the Tea Party, Project Veritas and the American Freedom Law Center.

Still more, reportedly went to groups that smear students, professors, journalists and other whistle-blowers who criticise Israeli racism, and try to get them fired from their jobs and banned from entering Israel and Palestine.

These McCarthyist groups include the Canary Mission, the AMCHA Initiative and the Foundation for the Defense of Democracies, and their targets include Jews, including Jews from the San Francisco Bay Area itself – the Jewish Federation’s ostensible constituents.

These revelations are almost assuredly just the tip of the iceberg. If the leaders of the most liberal communities in the Jewish diaspora are quietly funding the far-right in Israel, the US and around the world, it’s quite likely that the heads of Jewish communities with more conservative inclinations are also bankrolling this beast.

For the few Israeli Jews who aspire to live in peace and equality with everyone living in the land – and with all those who want to, as well – it must be depressing to take stock of the sad state of the country, and to realise that things are continually getting worse.

But if this past week has taught us anything, it is that their salvation will not come from the US, with leftist Jews in the US themselves under attack from their own institutions.

If the right-wing institutions steering the Jewish communities of Israel and the US can coordinate their political cleansing campaigns, it would behoove the leftists on both sides of the Atlantic to recognise the armies arrayed against them, as well – and to start strategising accordingly.

Reprinted from The New Arab