The biggest warmongers are generally the biggest cowards. They hide behind rhetoric and other people’s blood, sweat and toil to advance their personal agenda. John Bolton’s arrival in Moscow with, as he said, “no olive branches” in hand, should come as zero surprise because Bolton is nothing if not a coward.

Warmongers like Bolton bomb, invade and ruin some poor country that is in their way, the entire time claiming they themselves, or the people they represent, are the victim.

US foreign policy is suffused with the neoconservative strain of narcissism, an offshoot of Trotskyite interventionism, which sees everything in Manichean terms.

You are either our friend, and in the case of the US Empire subservient to our needs, or you are our enemy.

When Bolton is talking about taking us out of the UN I think he’s useful. When he’s arguing for a freer hand in developing ballistic missiles I think he’s a danger to humanity.

This is how National Security Advisor John Bolton sees the world. It’s not tough to parse in the end. And the sad truth is that this is likely exactly why he was hired by President Trump.

Bolton has been shaping US foreign policy along these lines for decades. He is one of the architects of the disastrous Iraq and Afghanistan wars as well as the post 9/11 surveillance state. He’s a cheap shill for Israeli expansionism and continues to argue against peace in North Korea, Japan and Syria.

Like Bolton, Trump is a bully; a fundamentally weak person who blusters and blows hard in service of a simplified narrative of good and evil.

Like Bolton, Trump is a bully; a fundamentally weak person who blusters and blows hard in service of a simplified narrative of good and evil. America good and anyone who disagrees with her, bad.

Make no mistake, in Bolton’s case, his agenda is born of spite, hate and opportunity. Trump, on the other hand, I’m not so sure about. It is one of the few things leaving me with some hope in all of this.

While John Bolton may be a US patriot, his brand of patriotism is of the most toxic variety. It is one where everyone else has to suffer to advance America.

It is a Hobbesian view of the world in which for the US to win, everyone else has to lose. Because without the US, the Superman of Human Society, the world would sink into barbarism.

At the end of the day paranoid schizophrenics like Bolton see threats to their well-being everywhere. They can only see the world through the lens of nation-state power politics.

Meanwhile the world is thrown off its axis and decent people must suffer for Bolton’s ends which always justify the means no matter the disastrous results.

Think about the millions who continue to suffer because of his view of Iran. Real Iranians are beneath contempt because they won’t overthrow the Theocracy on John Bolton’s timeline. He exemplifies the adage that the beatings will continue until morale improves. People like Bolton believe some people’s lives are worth more than others.

Theirs is a solipsism so complete that anyone who refuses to throw off the yoke of their ‘oppressors’ deserve whatever fate true-believers and cowards like Bolton concoct for them. They are simply collateral damage on the way to building a better world.

This is why I invoke Trotsky when I speak about neocons. People like Bolton are “Commies” who don’t realize it.

Bolton’s pushing President Trump to renege on the 1987 INF Treaty with Russia is born of his paranoia about China. China is the US’s real threat.

Think about the millions who continue to suffer because of his view of Iran.

So, while Bolton has never met a war he didn’t like he also hasn’t ever met a treaty the US has signed he did like.

I’m a huge fan of a non-interventionist foreign policy. I agree with Bolton on having no entangling alliances. But, I’m also no fan of unilaterally abrogating treaties which limit the development of ballistic missiles. Because this is not an ‘entangling alliance’ but rather an expression of trust and mutual self-defense.

If the US government is to have a role in foreign affairs it should be to sign treaties with other nations that limit the kind of damage people like John Bolton can do. And ones which limit the use and development of truly terrifying weapons should be lauded not thrown aside at the first opportunity.

The US and Russia should be leading the world on this front towards cooperation and peace. Putin would welcome that dialogue. His call to Japan to sign a peace treaty first then work out the territorial dispute over the Kuril Islands is a perfect example of this.

To Putin, rightly, trust is built with agreements over the easy stuff first then you work on the hard stuff. Bolton wants it all his way or he wants to take his toys and go home. 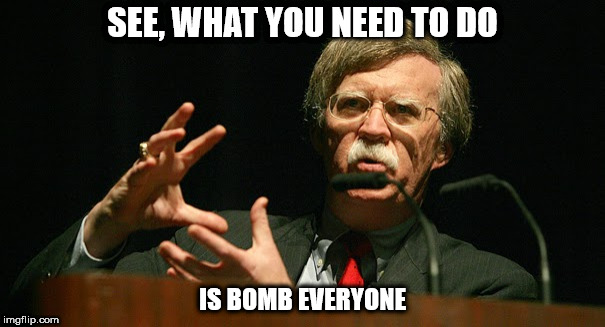 There should be a dialogue with China and any other country developing the missiles banned by the treaty that both Bolton and Putin are bound by. If limiting nuclear weapons is Trump’s goal why is he pulling out of this treaty rather than organizing summits?

Why is his State Dept. so unutterably backwards that it won’t even pick up the phone to talk with Iran?

By springing this on the world at this moment Bolton and Trump are signaling to everyone that they are simply weak-minded bullies who have neither the patience nor the temperament to confront difficult problems in constructive ways.

And in his interaction with Russian President Vladimir Putin, Bolton confirmed Putin’s suspicions that there will be no olive branches offered to Russia while he’s on the job, only more belligerence and posturing by cowards who threaten and demean, bully and provoke hoping to get what they want.

But when men like Bolton are confronted with men like Putin who see them for what they truly are, they always walk away empty handed and outmaneuvered.

Putin is the opposite of Bolton.

No one will make a deal with the US as long as John Bolton is on the scene. And now Trump is rightfully under attack for continuing to back both Israel and Saudi Arabia, neither one bastions of temperance and tolerance.

Both are increasingly seen as brutal and intractable to the rest of the world, including, finally the US electorate. The shaky edifice of Trump’s foreign policy goals of isolating Iran, driving a wedge between Russia and China and securing a subservient Europe via NATO is failing.

The exact opposite is happening. So, unless Trump’s prepared to meet Putin with a whole lot of olives when next they meet (presumably in November) the best he can hope for is a handful full of stones.