Like the other Silicon Valley monopolies, Google habitually takes the side of Israeli occupation and war crimes in Palestine – the very term Palestine is not used by their highly influential maps app.

A new report by a Palestinian human rights group last month exposed the depths of Google’s dedication to the Israeli occupation.

With a known history documented back more than 3,200 years, the name “Palestine” is the only term continuously used for the entire territory of the country lying between the Jordan River and the Mediterranean Sea.

Palestine is the most historically accurate term. But since 1948, when Zionist militias expelled the majority of the Palestinian population from the country by force, a new state, “Israel”, was established.

That state has never declared its borders.

Consequentially, when speaking about “Israel” it is unclear exactly what territory is being referred to. But Zionists of both the right and the “left” commonly claim the entire historic territory of Palestine as the “Land of Israel.”

The new report, by 7amleh (Hamleh), a Palestinian organisation advocating online rights, details how Google seems to almost go out of its way to eradicate the reality of Palestinian life.

In 2016, Google came under fire from Palestinians on social media when the terms “West Bank” and “Gaza” disappeared from Google Maps. Google said that the removal of these terms was down to a glitch and that they had never used the word Palestine in the first place.

(The West Bank and Gaza Strip are regions of Palestine that are important, since they represent the remaining Palestinian territories which Israel failed to occupy in 1948. In 1967, however, Israel took over those too.)

“Through its mapping and labelling,” the 7amleh report explains, “one can deduce that Google Maps recognises the existence of Israel, with Jerusalem as its capital, but not Palestine.”

There are further aspects of the way Google has wiped Palestinian life off the map though. As the 7amleh report maps in some detail, Palestinian villages in the Naqab (Negev desert) deemed “unrecognised” by Israel (inside of what is sometimes termed “Israel proper” – the territories of Palestine occupied in 1948) are not properly mapped by Google.

The report details how small Israeli villages are “displayed even when zoomed-out, while unrecognised Palestinian Bedouin villages, regardless of their size are only visible when zooming in very closely.”

This is despite the fact that there “are in total 46 Bedouin villages in the Naqab, the majority of which existed before Israel’s creation in 1948. Some claim to have existed since the 7th century.”

Israel has repeatedly attempted to physically remove these villages, but has repeatedly failed, thanks to the resistance of the Palestinians who live there, and thanks also to national and international solidarity shown to those villages.

Their Israeli (lack of) status as “unrecognised” also means that the state refuses to connect the villages to basic services like water and electricity – despite the fact that nearby Israeli-Jewish settlements are given all the support possible.

As Basma Abu-Qwaider, one Palestinian Naqab villager, explains in the report:

Google Maps acts in a discriminatory manner towards the unrecognised village the same [way] as the Israeli government does. Google ignores the existence of these villages just like Israel and for me if you do not exist on the map it means that you are invisible and that’s exactly what Israel wants us to be.

This solidarity with Israeli racism expressed by Google’s helpful attitude towards Israel’s wiping of Palestinians quite literally off the map extends across the 1967 “Green Line” ceasefire boundary.

Palestinian villages even within the “West Bank” area of the Jordan Valley are not properly mapped by Google either. The report documents that while Israeli settlements “can be seen when looking at the larger area of the map” some Palestinian villages are only visible when zoomed in – and even that only as a result of pressure being put on by a human rights organisation.

Google also refuses to recognise or map the reality of Israel’s apartheid roads system for Palestinians.

As part of Israel’s ongoing settler-colonisation of Palestine, large parts of the West Bank – which is ruled by Israeli military decree – are prohibited access for Palestinians. Many roads are reserved for the use of Jews only.

Despite the illegality of these practices under international law, Google’s route-planning apps do not designate Israeli settlements in the West Bank as illegal.

7amleh’s report concludes: “Google Maps, as the largest global mapping and route planning service, has the power to influence global public opinion and therefore bears the responsibility to abide by international human rights standards and to offer a service that reflects the Palestinian reality.”

Google should be compelled to end its complicity with Israeli racism and apartheid.

Ohhh Google. What if we told you that when typing ‘Persian Gulf’ in Google Maps it shows people from the Arab Gulf states one thing (‘Arabian Gulf’), and Iranians and the rest of the world another (‘Persian Gulf’). Below is a screen cap of a search for ‘Persian Gulf’ when you change your country domain in Google Maps — in the example below, we changed it to the UAE. 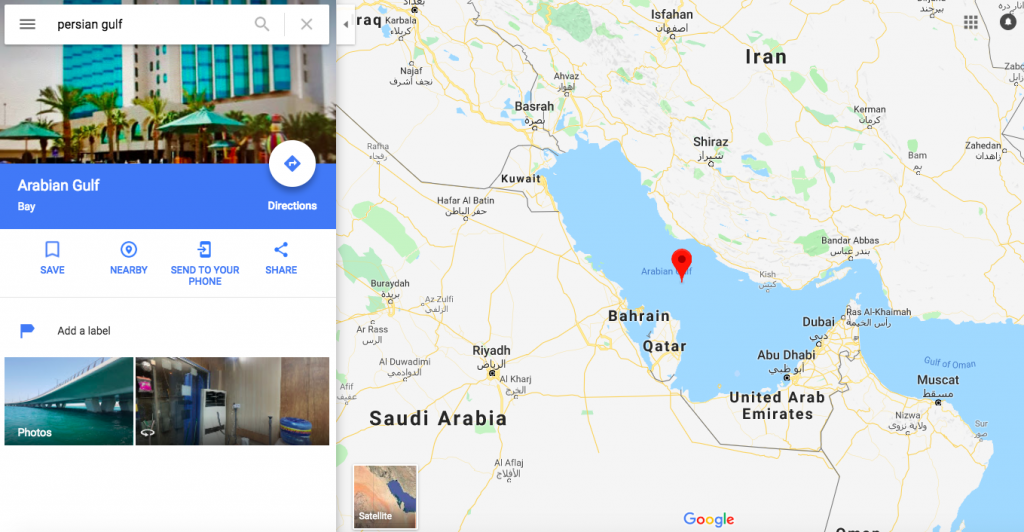