On Thursday, a suicide car bomb detonated outside the police headquarters in the Iranian port city of Chabahar, killing two police officers and wounding more than 40.

While the bombing was claimed by local militant group Ansar al-Furqan, the location is far from innocuous in the context of renewed US sanctions on the country, leading Iranians to conjecture about the motives behind the attack.

Located at the mouth of the Gulf of Oman, almost directly across from the Omani capital of Muscat, Chabahar is a free-trade zone and Iran’s southern-most city.

The only oceanic and deep-water port city of Iran, Chabahar is south of Zahedan, the capital of the Sistan and Baluchestan province.

Only 170 kilometres east, in Pakistan, lies another port city, Gwadar. The Gwadar port is being developed by China for trade purposes – much to India’s displeasure. India has sought a sanctions waiver from the United States in order to further develop Chabahar and outflank its rival in reaching land-locked countries of Central Asia and Europe. 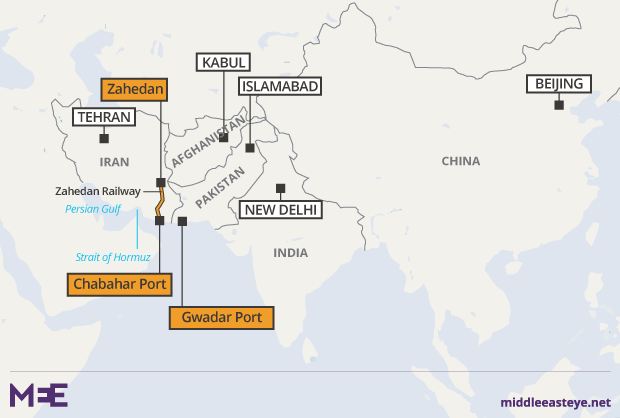 In May 2016, India, Iran and Afghanistan signed a deal regarding the establishment of a transit and transport corridor between the three countries using Chabahar Port as one of the regional hubs.

Indian Prime Minister Narendra Modi announced that New Delhi would invest up to $500m to develop the Iranian port, as well as assist in building a 500-km railroad from Chabahar to Zahedan, from where goods would be transported by rail to Zaranj in Afghanistan, near the Iranian border, according to news outlet Iran Daily.

The first phase of the project, the expansion of the Shahid Beheshti Port, one of the two ports that constitute Chabahar Port, was inaugurated by President Hassan Rouhani in December 2017 during a ceremony attended by dignitaries from 17 countries.

Transit via the Shahid Beheshti Port is now significantly cheaper than through ports of Pakistan, according to Behrouz Aqaei, the director general of the Ports and Maritime Organisation of the Sistan-Baluchestan province.

Iran sees the emergence of a new cost-effective transportation corridor for trade between Europe and the Indian Ocean as a means of weakening the grip of US sanctions on the Iranian economy.

But the Chabahar project is also perceived as a significant way to enhance its economic ties with neighbouring and more distant countries, while lessening its reliance on the United Arab Emirates, which has long acted as a middleman through which shipments to Iran would transit.

“Deep-water ports can handle big cargo and oceanic ships … With Chabahar’s development, this need will be resolved,” economic analyst Saheb Sadeghi explained to Middle East Eye. “This will put an end to Iran’s reliance on the UAE as a shipping intermediary.”

Sadeghi noted that upon completion, the new deep-water port in Chabahar would only be the third in the Gulf, after the Jabal Ali port in the UAE and Damam in Saudi Arabia, two stalwart Gulf allies staunchly opposed to Iran. Turkey and Qatar are also working on port projects in the area.

For Israeli newspaper Jerusalem Post, in addition to the hundreds of millions of dollars lost to the UAE, Iran is also vulnerable to a potential UAE closure of its seaborne trade in the event of conflict between Iran and the UAE or its Gulf and Western allies.

Fingers pointed across the Gulf

The existing geopolitical and economic stakes have led many Iranians to seek answers for Thursday’s attack beyond the claims of responsibility of Ansar al-Furqan, a Sunni militant group based in the Sistan and Baluchestan province, which is home to a Sunni minority in the largely Shia country.

On Sunday, Fars news agency reported that Iranian police had detained 10 people in connection with the case, without providing further details.

Tehran has repeatedly accused its key regional rival Saudi Arabia and the US of funding most militant groups in Sistan and Baluchestan, a charge Riyadh and Washington deny.

A number of Arab countries, including Kuwait and Qatar, condemned the deadly attack, but both Saudi Arabia and the UAE have thus far remained silent on the matter at the time of publication.

Iranian Foreign Minister Javad Zarif explicitly accused the Emirates of being behind the Chabahar attack in a tweet on Thursday.

Foreign-backed terrorists kill & wound innocents in Chabahar. As we've made clear in the past, such crimes won’t go unpunished: In 2010, our security services intercepted & captured extremists en route from UAE. Mark my words: Iran WILL bring terrorists & their masters to justice pic.twitter.com/Tij1I7zemx

Qassem Moheb-Ali, the Iranian foreign ministry’s former director general for the Middle East, also went on to accuse “Arab powers” and Pakistan of using terrorism in Chabahar to alienate investors and slow down the development of the port, a theory also pushed forward by government-run newspaper Iran and moderate newspaper Ettelaat.

“Those who benefit from the terrorist attacks in Chabahar and the sentiment of insecurity in this oceanic city are the suspects,” Albert Beghzian, a professor of economics at University of Tehran, told Middle East Eye. “When a terrorist attack occurs, financial investment may face insecurity.”

Amid a seeming consensus in Iran about the responsibility behind the attacks, the Chabahar port project nonetheless seems to be moving forward undeterred.

On Friday, Indian President Ram Nath Kovind hailed New Dehli’s participation in the Chabahar project as “a sign of good cooperation between the two countries”. Meanwhile, the deputy managing director of Iran’s maritime and ports organisation, Hadi Haghshenas, insisted: “We will continue the infrastructure projects of Shahid Beheshti port with all power we have.”

Sadeghi, the economic analyst, said he was confident that Thursday’s attack would not outweigh the economic stakes at play in Chabahar.

Terrorist attacks have “happened before in the Sistan province, but such attacks will only lead the security apparatus to enhance its presence there to protect that region,” he said. “The recent attack was supposed to instill insecurity in Chabahar, but it won’t lead anywhere as the project is highly important for Iran, India and Afghanistan.”