The European Union’s foreign policy chief said on Monday a system to facilitate non-dollar trade with Iran and circumvent U.S. sanctions could be in place by year’s end.

The European Union wants the so-called Special Purpose Vehicle (SPV) to help preserve the economic benefits for Iran deriving from the curbs it placed on its nuclear program under a 2015 deal with world powers, from which President Donald Trump withdrew the United States in May.

EU diplomats had hoped to have the SPV in place by now but ran into delays as member states balked at hosting it for fear of being targeted by the revived U.S. sanctions regime against Iran.

Asked about progress on the SPV, EU foreign policy chief Federica Mogherini told reporters: “I would expect this instrument to be established in the coming weeks so before the end of the year as a way to protect and promote legitimate business with Iran.”

She did not offer any other details following a meeting of the bloc’s foreign ministers in Brussels but said work on creating the mechanism was “advancing well.”

France and Germany are now due to take joint responsibility for the SPV. But EU diplomats have said its ambitions could be scaled back to encompass only less sensitive items such as humanitarian and food products – rather than oil trade.

French Foreign Minister Jean-Yves Le Drian told the bloc’s ministers in a closed-door meeting in Brussels on Nov. 19 that Paris and Berlin were working closely together to achieve something by year-end, two other EU diplomats said.

The discussion came as EU nations have debated potential new sanctions on Iran after accusations of Iranian attack plots in France and Denmark.

“Our strong support for the implementation of the JCPOA (2015 nuclear deal) doesn’t mean we turn a blind eye for other issues,” Mogherini told reporters.

Until now, the EU has been straining to uphold the 2015 nuclear accord between Iran and world powers, but has been less willing to consider sanctions, instead seeking fresh talks with the Islamic Republic.

Iran has warned it could ditch the nuclear deal if EU powers do not protect its trade and financial benefits. 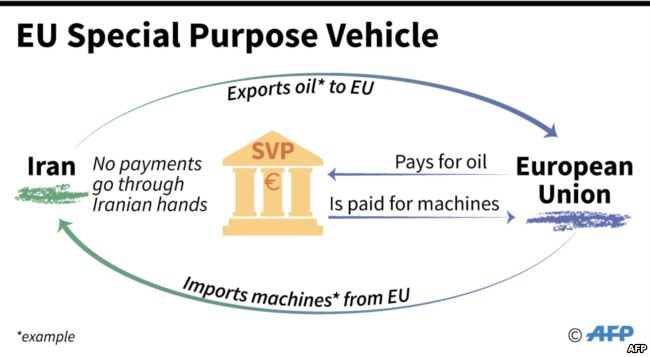