Three months ago, in Mid-October, Subhash Chandra Garg, economic affairs secretary at India’s finance ministry, said that India still hasn’t worked out yet a payment system for continued purchases of crude oil from Iran, just before receiving a waiver to continue importing oil from Iran in its capacity as Iran’s second largest oil client after China. 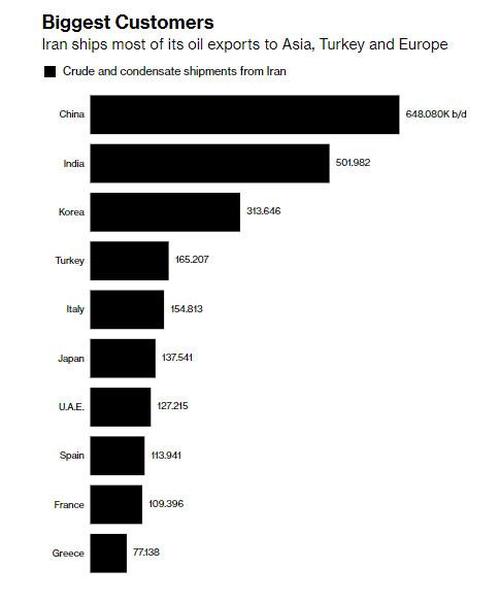 That took place amid reports that India had discussed ditching the U.S. dollar in its trading of oil with Russia, Venezuela, and Iran, instead settling the trade either in Indian rupees or under a barter agreement. One thing was certain: India wanted to keep importing oil from Iran, because Tehran offers generous discounts and incentives for Indian buyers at a time when the Indian government is struggling with higher oil prices and a weakening local currency that additionally weighs on its oil import bill.

Fast forward to the new year when we learn that India has found a solution to the problem, and has begun paying Iran for oil in rupees, a senior bank official said on Tuesday, the first such payments since the United States imposed new sanctions against Tehran in November. An industry source told Reuters that India’s top refiner Indian Oil Corp and Mangalore Refinery & Petrochemicals have made payments for Iranian oil imports.

To be sure, India, the world’s third biggest oil importer, has wanted to continue buying oil from Iran as it offers free shipping and an extended credit period, while Iran will use the rupee funds to mostly pay for imports from India.

“Today we received a good amount from some oil companies,” Charan Singh, executive director at state-owned UCO Bank told Reuters. He did not disclose the names of refiners or how much had been deposited.

Meanwhile, in lieu of transacting in dollars, Iran is devising payment mechanisms including barter with trading partners like India, China and Russia following a delay in the setting up of a European Union-led special purpose vehicle to facilitate trade with Tehran, its foreign minister Javad Zarif said earlier on Tuesday.

As Reuters notes, in the previous round of U.S. sanctions, India settled 45% of oil payments in rupees and the remainder in euros but this time it has signed deal with Iran to make all payments in rupees as New Delhi wanted to fix its trade balance with Tehran.  Case in point: Indian imports from Iran totalled about $11 billion between April and November, with oil accounting for about 90 percent.

Singh said Indian refiners had previously made payments to 15 banks, but they will now be making deposits into the accounts of only 9 Iranian lenders as one had since closed and the U.S has imposed secondary sanctions on five others.