A new Politico/Morning Consult poll has found that there is much more support for ongoing military occupations among Democrats surveyed than Republicans.

To the question “As you may know, President Trump ordered an immediate withdrawal of more than 2,000 U.S. troops from Syria. Based on what you know, do you support or oppose President Trump’s decision?”, 29 percent of Democrats responded either “Somewhat support” or “Strongly support”, while 50 percent responded either “Somewhat oppose” or “Strongly oppose”. Republicans asked the same question responded with 73 percent either somewhat or strongly supporting and only 17 percent either somewhat or strongly opposing.

Those surveyed were also asked the question “As you may know, President Trump ordered the start of a reduction of U.S. military presence in Afghanistan, with about half of the approximately 14,000 U.S. troops there set to begin returning home in the near future. Based on what you know, do you support or oppose President Trump’s decision?” Forty percent of Democrats responded as either “Somewhat support” or “strongly support”, with 41 percent either somewhat or strongly opposing. Seventy-six percent of Republicans, in contrast, responded as either somewhat or strongly supporting Trump’s decision, while only 15 percent oppose it to any extent.

This didn’t happen by itself, and it didn’t happen by accident. American liberals didn’t just spontaneously start thinking endless military occupations of sovereign nations is a great idea yesterday, nor have they always been so unquestioningly supportive of the agendas of the US war machine. No, Democrats support the unconscionable bloodbaths that their government is inflicting around the world because they have been deliberately, methodically paced into that belief structure by an intensive mass media propaganda campaign.

The anti-war Democrat, after Barack Obama was elected on a pro-peace platform in 2008, went into an eight-year hibernation during which they gaslit themselves into ignoring or forgiving their president’s expansion of George W Bush’s wars, aided by a corporate media which marginalized, justified, and often outright ignored Obama’s horrifying military expansionism. Then in 2016 they were forced to gaslight themselves even further to justify their support for a fiendishly hawkish candidate who spearheaded the destruction of Libya, who facilitated the Iraq invasion, who was shockingly hawkish toward Russia, and who cited Henry Kissinger as a personal role model for foreign policy. I recall many online debates with Clinton fans in the lead up to the 2016 election who found themselves arguing that the Iraq invasion wasn’t that bad in order to justify their position.

After Clinton managed to botch the most winnable election of all time, mainstream liberal America was plunged into a panic that has been fueled at every turn by the plutocratic mass media, which have seized upon unthinking cultish anti-Trumpism to advance the cause of US military interventionism even further with campaigns like the sanctification of John McCain and the rehabilitation of George W Bush. Trump is constantly attacked as being too soft on Moscow despite having already dangerously escalated a new cold war against Russia which some experts are saying is more dangerous than the one the world miraculously survived. Trump’s occasional positive impulses, like the agenda to withdraw US troops from Syria and Afghanistan, are painted as weakness and foolishness by the intelligence veterans who now comprise so much of corporate liberal media punditry. And their audience laps it up because by now mainstream liberals have been trained to have far more interest in opposing Trump than in opposing war. 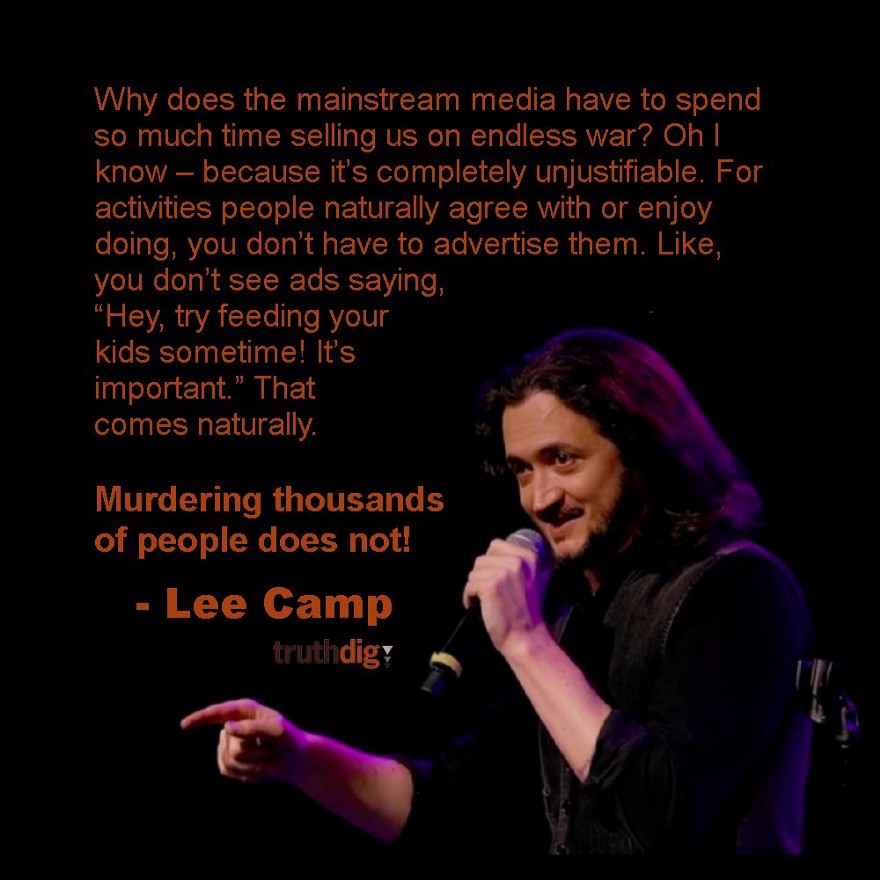 And how sick is that? Obviously Trump has advanced a lot of toxic agendas which need to be ferociously opposed, but how warped does your mind have to be to make a religion out of that opposition which is so all-consuming that it eclipses even the natural impulse to avoid inflicting death and destruction upon your fellow man? How viciously has the psyche of American liberals been brutalized with mass media psyops to drive them into this psychotic, twisted reality tunnel?

There was one group in the aforementioned survey which was not nearly as affected by the propaganda as armchair liberals. To the statement “The U.S. has been engaged in too many military conflicts in places such as Syria, Iraq and Afghanistan for too long, and should prioritize getting Americans out of harm’s way,” military households responded 54 percent that this statement aligns with their view. Turns out when it’s your own family’s blood and limbs on the line, people are a lot less willing to commit to endless violence. Sixty percent of Republicans agreed with this statement, while only 41 percent of Democrats did.

Could these statistics have something to do with the fact that younger veterans are statistically much more likely to be Republicans than Democrats? Is it possible that a major reason Trump beat Hillary Clinton, and a major reason Republicans are now far less bloodthirsty than Democrats, is because mothers, fathers, sisters and brothers are tired of flag-draped coffins being shipped home containing bodies which were ripped apart for no legitimate reason in senseless military entanglements on the other side of the world? Seems likely. And it also seems likely that the mass media propaganda machine is having a harder time steering people toward war once they’ve personally tasted its true cost.

Chart and link added by The Iranian

People are defecting from the GOP. But not to the Democrats (CNN):

The rise in pure independents also likely signals that the primaries of 2016 were not an outlier, and voters will continue to self-identify more like free agents, even as their partisanship is increasingly predictable. It’s one of the paradoxes of recent years: As partisan polarization increases, so does distrust in institutions. But in the end, a party can no longer decide if voters don’t really want to be a part of it.
PrevPreviousPompeo’s US Jingoism And Anti-Iran Warmongering Rejected By Mideast Public
NextPompeo Announces International Summit On Iran To Address “Destabilizing Influence”Next