Why Is The British Government Banning Hizbullah?

This week the British Home Secretary Sajid Javid laid out an order that proscribes the political arm of the Lebanese resistance organization Hizbullah as a terrorist organization under the Terrorism Act 2000. The military arm of Hizbullah was already named as such.

The reason given by the home secretary makes little sense:

My priority as Home Secretary is to protect the British people. As part of this, we identify and ban any terrorist organisation which threatens our safety and security, whatever their motivations or ideology which is why I am taking action against several organisations today.

Hizballah is continuing in its attempts to destabilase the fragile situation in the Middle East – and we are no longer able to distinguish between their already banned military wing and the political party. Because of this, I have taken the decision to proscribe the group in its entirety.

During the last years Hizbullah’s operated to stabilize the Syrian government and to defend Lebanon against an onslaught of Jihadis coming over the Syrian border.

The Hizbullah movement represents some 90% of all Lebanese Shia, around 30% of Lebanon’s population.

How that is supposed to “destabilize the fragile situation in the Middle East” is a bit hard to understand. Moreover nothing in the definition of terrorism in the Terrorism Act 2000 speaks of destabilization and nothing in there seems to apply to Hizbullah, especially not to its political and welfare arm. Besides its operations in Lebanon and Syria there were no Hizbullah attacks at all in Britain or anywhere else.

One also wonders if the British government really considered the consequences of the act.

❌ From today, Hizballah is a banned terrorist organisation in the UK.

❌ Anyone who is a member or invites support for it is breaking the law.

❌ It is also illegal to display Hizballah flags in public – and new laws will make this a crime online.https://t.co/XrW97F5av4

Under the law “support” is defined quite widely. 12(2)(c) says for example:

A person commits an offence if he arranges, manages or assists in arranging or managing a meeting which he knows is to be addressed by a person who belongs or professes to belong to a proscribed organisation.

Oh – by the way – here is the Hizbullah flag straight out of Wikipedia. 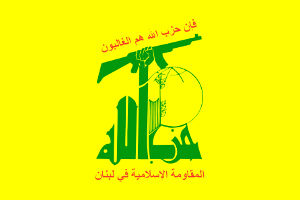 Does displaying the flag make this blog, or Wikipedia, illegal to read in Britain?

The Hizbullah movement represents some 90% of all Lebanese Shia, around 30% of Lebanon’s population. It runs hospitals and schools. It supports the Lebanese army. It is an integral part of the Lebanese government and state. Hizbullah called the British ban “an insult to the Lebanese people”. By proscribing Hizbullah as a terrorist organization and by prohibiting any “support” for it the British government makes it extremely difficult for itself and for others to keep up relations with the Lebanese state.