A newly declassified US intelligence memo has been unearthed this week and featured in a bombshell Wall Street Journal report. It proves that the year prior to the Bush administration’s 2003 invasion of Iraq the White House was expressly warned in great detail of all that could and would go wrong in the regime change war’s aftermath, including the Sunni-Shia sectarian chaos and proxy war with Iran that would define Iraq and the whole region for years following. And crucially, it reveals that seven months before the US invasion of Iraq, American intelligence officials understood that Osama bin Laden was likely “alive and well and hiding in northwest Pakistan”  — important given that a key Bush admin claim to sell the war was that Saddam Hussein and bin Laden were “in league” against the United States.

The July 2002 memo was authored by William Burns, then serving as assistant secretary of state for near eastern affairs, and though clearly dismissed by the Bush neocons making the case for war, proved prescient on many levels. “Following are some very quick and informal thoughts on how events before, during and after an effort to overthrow the regime in Baghdad could unravel if we’re not careful, intersecting to create a ‘perfect storm’ for American interests,” Burns wrote in the memo, classified ‘Secret’ and sent to Secretary of State Colin Powell.

The classified memo’s existence was first brought to the public’s attention through Knight Ridder’s reporting in July 2003, which sought to reveal at the time there were pockets of dissenting voices in the State Department and intelligence community pushing back against the absurd White House claim that the whole operation would be a “cakewalk” and US troops would be greeted as “liberators”. And there’s Vice President Dick Cheney’s infamous declaration that the military effort would take “weeks rather than months.”

Now, sixteen years after the start of the war the “perfect storm” intel briefing has been made public in fully redacted form and it affirms, as the WSJ reports, “Diplomats accurately forecast many setbacks: sectarian violence, attacks on U.S. troops, Iranian intervention and long road to structural change.” Out of this came the rise of ISIS and the continued unleashing of regime change and sectarian chaos on neighboring Syria.

The ten page memo outlines a litany of catastrophic doom and gloom scenarios resulting from the invasion which would destabilize not only Iraq, but unleash sectarian hell on the entire region. 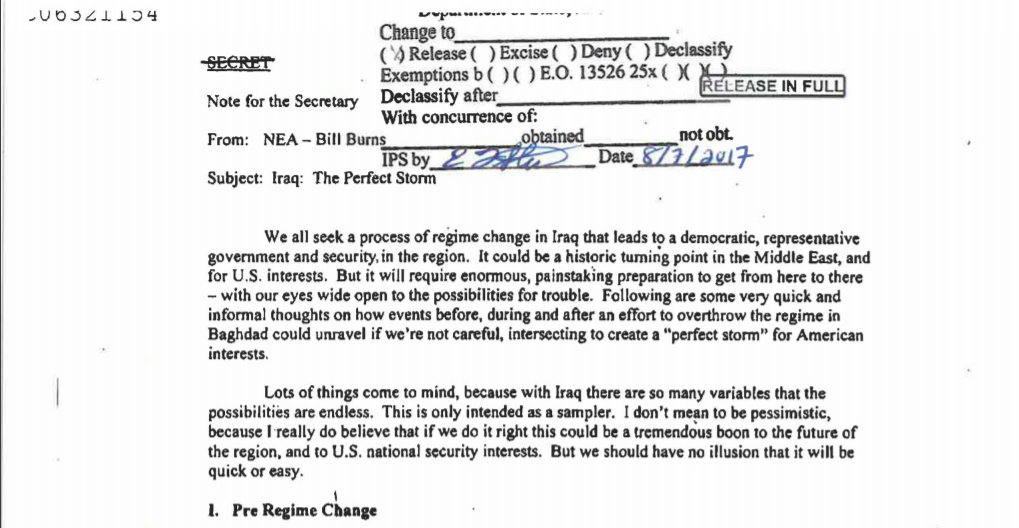 Here are but a handful of the memo’s many warnings which later proved right on target, as summarized by the military reporting website Task & Purpose:

“I don’t mean to be pessimistic, because I really do believe that if we do it right this could be a tremendous boon to the future of the region, and to U.S. national security interests,” the memo stated. “But we should have no illusion that it will be quick or easy.”

And further contradicting Cheney’s “weeks rather than months” claim, the memo accurately predicted that U.S. troops would have to stay for, “Five years – maybe four if we’re lucky, ten if we’re not.”

Some further interesting highlights from the July 2002 ‘Secret’ report are below.

“Osama bin Laden turns out to be alive and well and hiding in NW Pakistan. We press Paks, internal stresses grow in Pakistan.”

Iran and Syria targeted next

“Following US warnings that it would take the war on terrorism to all groups with global capabilities, Iran and Syria hold summit meeting, decide US has targeted them.”

Iran and Syria “strengthen positions in face of perceived US threat against them following action in Iraq.”

“This means night becomes the time for revenge, all over Iraq. A horrible wave of bloodletting and private vengeance begins… US forces are helpless to stop the countrywide phenomenon. Police, intelligence, senior military, and Baath Party officials effectively go into hiding…”

“Shia religious and political leaders, unhappy with composition of provisional government and determined to secure greater share of power in post-Saddam Iraq… This leads to more violent confrontations, and deaths, and the riots become a political tool to demonstrate power and increase leverage against Sunnis and Kurds…”

Long US quagmire to put down sectarian powder keg

“Faced with inchoate and escalating disorder in the provinces, the US faces an agonizing decision: step up to a more direct security role, or devolve power to local leaders.”

“Law and Order, collecting weapons. We won’t get them, most will go to ground.”

“All for one, one for all, free for all – deals, short-term scrambles. It will be every clan for itself.”