Any calls for accountability for the Christchurch massacre should start with the powerful politicians who have created so much chaos in the Muslim world and beyond.

Following the horrific shooting at two mosques in Christchurch, New Zealand, statements of solidarity and sympathy have poured in from around the world, condemning the act and remembering the lives of the 50 people, including several children, who lost their lives.

Yet, not everyone expressing sympathy has been deemed sincere by those in mourning, as evidenced by the scandal surrounding the confrontation between Chelsea Clinton and two Muslim women that occurred following a vigil commemorating the Christchurch shooting. Clinton’s presence at the vigil was unwelcome according to the two women who confronted her, owing to her recent statements against Rep. Ilhan Omar (D-MN) following her criticism of the Israel lobby’s influence.

However, the attention focused on Chelsea Clinton’s confrontation has eclipsed the attention given to numerous U.S. politicians who also expressed solidarity with the Christchurch victims, despite having devoted much of their political careers to destroying Muslim-majority nations or stirring up Islamophobia, both of which helped to create the situation that led to Friday’s tragic shooting.

While she didn’t attend a vigil in person like her daughter, former Secretary of State and former Democratic presidential nominee Hillary Clinton took to Twitter to state that her “heart breaks for New Zealand and the global Muslim community. We must continue to fight the perpetuation and normalization of Islamophobia and racism in all its forms.” Clinton then added “White supremacist terrorists must be condemned by leaders everywhere. Their murderous hatred must be stopped.”

My heart breaks for New Zealand & the global Muslim community. We must continue to fight the perpetuation and normalization of Islamophobia and racism in all its forms.

White supremacist terrorists must be condemned by leaders everywhere. Their murderous hatred must be stopped.

Though that sentiment would likely be welcomed from many other figures, the fact that Clinton — who presided over the destruction of Libya, several U.S.-backed “Arab Spring” revolutions, and the beginnings of the U.S.- and CIA-backed Syrian “uprising” — claimed to feel such empathy for those mourning lost loved ones on Friday was quickly met with skepticism and consternation online.

For instance, journalist Sharmine Narwani responded to Clinton, stating that the former Secretary of State had “killed more Muslims than anyone since George W. Bush” and that Clinton had “cackled while doing it.” The latter is a reference to Clinton’s laughing during an interview in which she recounted the death of Libya’s Muammar Gaddafi as “We came, we saw, he died.” Gaddafi was tortured, sodomized and shot by U.S.-backed rebels and since his overthrow, which Clinton helped plan, Libya is the site of numerous terror groups, a massive illegal weapons trade, and public slave markets where African migrants are auctioned off to the highest bidder.

You've killed more Muslims than anyone since George W. Bush – and cackled while doing it. Sit down.

In addition to her role in the destruction of Libya, which continues to cause death and suffering for tens of thousands of Muslims, Clinton was also connected to the rise and maintenance of terror groups like Al Qaeda and Daesh (ISIS). For instance, Clinton accepted huge donations from the Kingdom of Saudi Arabia to her family foundation even though she knew at the time that its government was funding Al Qaeda and Daesh, according to leaked email correspondence published by WikiLeaks. Further, a French company with significant connections to Clinton was involved in financing Daesh’s activities for several years.

Both terror groups have caused enormous suffering to Muslims, Christians and those of other faiths in countries like Syria and Iraq and have also been used to promote Islamophobia in the West by conflating the vast majority of peaceful Muslims with these fringe extremist groups.

Much like his former Secretary of State, former President Barack Obama also shared his condolences after the Christchurch shooting despite his presidency’s role in the murder and maiming of countless innocent Muslims around the world. On Friday, Obama tweeted “Michelle and I send our condolences to the people of New Zealand. We grieve with you and the Muslim community. All of us must stand against hatred in all its forms.”

I think people who murder hundreds of thousands of Muslims, vilify the religion by creating head-chopping terrorists, & sell lethal weapons to the main global sponsor of jihadism (KSA)… well, I think those people should not 'send condolences to the Muslim community.' #Murderer https://t.co/LAVPoR08pN

In addition to his role in turning the Muslim-majority nation of Libya from Africa’s wealthiest nation to a failed state, Obama also oversaw the mass murder of innocent Muslims via his expansion of the drone war. Official estimates hold that Obama’s drone war during his eight years in office was responsible for 2,298 to 3,398 civilian deaths in just Iraq, Libya, and Syria alone — not counting the other bombs Obama dropped in Yemen, Somalia and Pakistan, all Muslim-majority countries.  In his last year of office alone, Obama dropped more than 26,000 bombs as part of his massive drone war against Muslim-majority nations.

However, the toll is likely much higher, owing to the fact that U.S. drone strikes kill far more civilians than supposed militants. Indeed, drone strikes kill civilians 90 percent of the time and, under Obama, the government avoided the issue of reporting the real number of civilian deaths simply by naming all those in the strike zone as enemy combatants. Where are Mr. Obama’s condolences for the innocent Muslims his drone war obliterated and maimed?

To Trump Muslims are terrorists, so how can they be victims?

The clear hypocrisy of Clinton’s and Obama’s responses to the Christchurch shooting was, unsurprisingly, mirrored by the current Republican administration. For instance, President Donald Trump shared his “warmest sympathies” and “best wishes” on Twitter but declined to call the shooting a “terror attack” or mention Islam or Muslims. Trump tweeted:

Trump likely found himself unwilling to engage much with the nature of the event itself given that the alleged shooter, Brenton Tarrant, had mentioned Trump by name, calling him a “symbol of renewed white identity and common purpose,” but rejecting his abilities as a “policy maker and leader.”

Furthermore, Trump’s heavy Islamophobic rhetoric throughout his campaign and into his presidency has done much to foster fear and mistrust of Muslims in Western countries. From his claim that “Islam hates us” to his so-called “Muslim ban” policy, Trump has repeatedly conflated the religion of Islam with terrorism, failing to note that extremist groups and terrorists are a tiny minority of the global Muslim community, and often target Muslim as victims. Trump’s views may well be attributable in large part to his obsession with TV news, which he is said to watch for over eight hours a day, given that nine out of 10 Western media reports on Islam and Muslims involve acts of violence or terrorism.

Beyond his views and past statements, Trump’s time in office has carried an extremely high death toll in Muslim-majority nations, largely thanks to his relaxation of the rules of engagement for the drone war; his support for the Saudi-led war in Yemen; his bombing campaigns in Syria and Iraq; and his “regime change” policy in Iran.

Our deepest condolences and prayers are with victims, family members, and loved ones affected by the heinous act of terror against worshippers at mosques in Christchurch. The United States stands with the people of New Zealand.”

Our deepest condolences and prayers are with victims, family members, and loved ones affected by the heinous act of terror against worshippers at mosques in Christchurch. The United States stands with the people of New Zealand ?? ??

Despite offering his “deepest condolences and prayers” to the Muslims who were killed and their loved ones, Bolton has been a long-time promoter of destructive policies in the Middle East, having vigorously promoted the wars in Afghanistan, Libya and Iraq as well as having pushed for increased military intervention in Syria and the preemptive bombing of Iran. Currently, as national security advisor, Bolton is helping to oversee a “maximum pressure” campaign against Iran, which has imposed draconian sanctions that are gravely impacting the lives of innocent Iranian civilians.

Furthermore, Bolton has spent much of his career not only targeting Muslim-majority nations and supporting wars that have killed millions, but also ramping up Islamophobia among the American right. For instance, Bolton since 2013 has chaired the Gatestone Institute, a non-profit publisher that creates content on the alleged threat that Islam poses to Western society. Gatestone’s president is Nina Rosenwald, a former board member of the American Israeli Public Affairs Committee (AIPAC) and a current member of the Council on Foreign Relations, who is also the heir to the Sears, Roebuck & Company department store fortune. 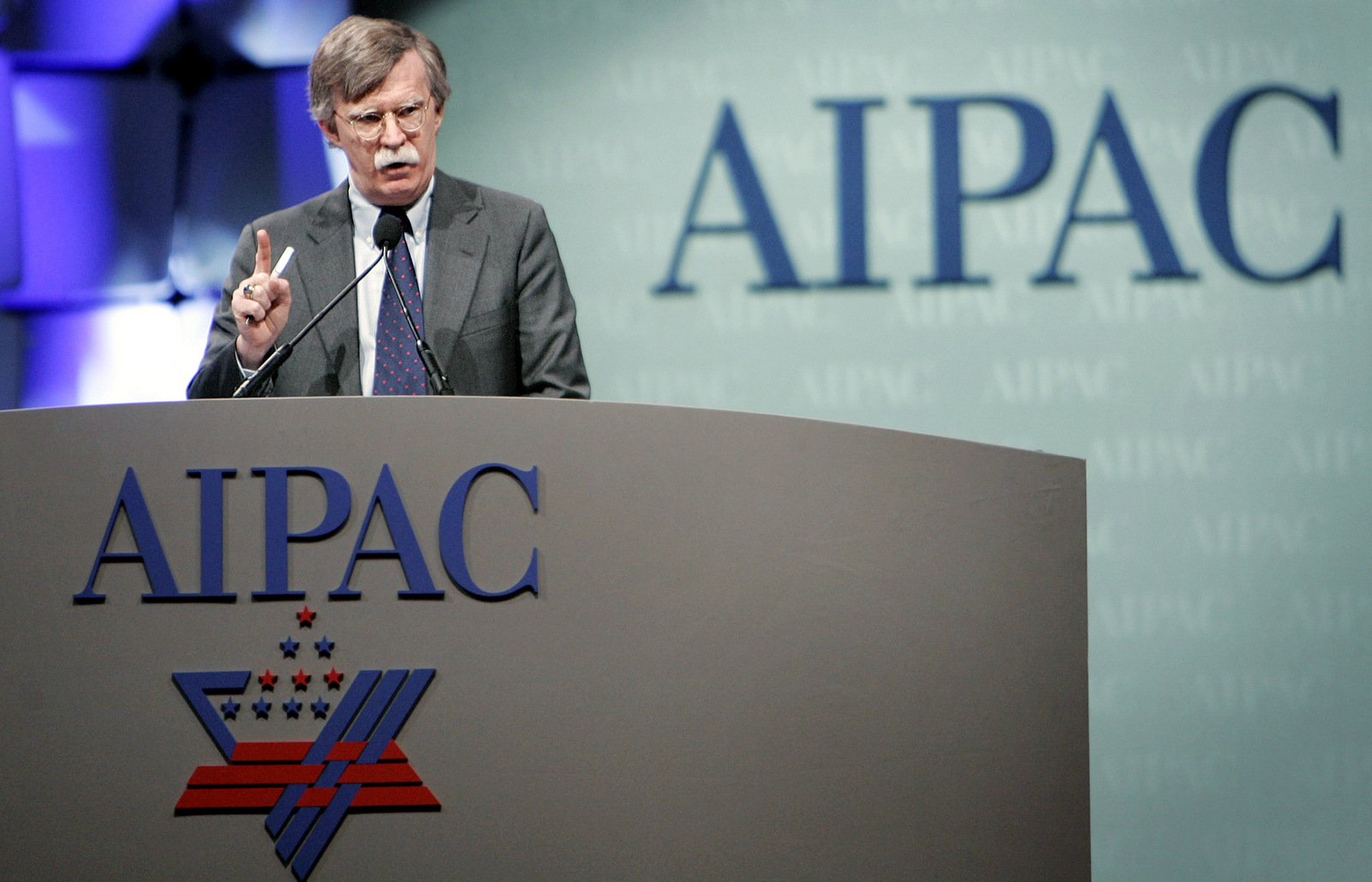 Some of the outlandish claims about Muslims published by the Bolton-chaired institute include assertions that “Muslim mass-rape gangs” are transforming the United Kingdom into “an Islamist Colony” and that Muslim immigrants and refugees carry “highly infectious diseases,” promote genital mutilation practices, and conduct terror attacks in their new host countries.

In addition, as The Intercept noted in 2018, Gatestone was also largely responsible for spreading the false claim that there are “no-go zones” in several European states where Muslim immigrants have allegedly set up a parallel society where local police no longer enforce the law. This claim was heavily promoted by Trump during his 2016 candidacy.

Bolton’s stint at Gatestone has paid off quite handsomely, as he is said to have made at least $310,000 chairing the organization. However, at the same time, the institute’s output has been instrumental in creating the current climate of Islamophobia in the West, including claims that were cited by the Christchurch shooter himself as motivating him to massacre innocent Muslims.

From Christchurch to the heights of power

While many have called for those who have bred the extremism responsible for the Christchurch shooting to be held accountable, few such calls have included powerful politicians — past and present — whose policies not only destroyed Muslim-majority nations and killed untold numbers of innocent Muslims, but also helped to foment Islamophobia to dangerous new heights.

Though certain YouTubers and online media personalities share part of the blame, it is the people at the pinnacle of power that have brought us this false and manufactured “clash of civilizations” narratives that they have created by destroying Muslims’ home countries, forcing them to flee, creating the international refugee crisis. Not only that, but the war propaganda used to justify those wars at home have propagandized the West to see those same refugees as dangerous “others” worthy of suspicion.

Both of these elements greatly contributed to the dark events in Christchurch on Friday and any calls for accountability should start with these powerful politicians who have created so much chaos in the Muslim world and beyond.