Though Trump casually announced that it was “time for the United States to fully recognize Israel’s Sovereignty [sic] over the Golan Heights” last Thursday, he made the U.S.’ recognition of Israel’s claim to the territory official on Monday, at a signing ceremony that was attended by Israeli Prime Minister Benjamin Netanyahu. Trump’s willingness to use his executive power to grant Israeli land grabs “official recognition” — such as in Jerusalem and now the Golan — has emboldened far-right Israeli politicians who have long been eager to annex other territories.

Please, sir, may we have some more?

For 52 years, we’ve also been thriving in Judea/Samaria [Israeli name for the West Bank of Palestine]. Also of critical strategic, historic and security importance. It is time that we recognize our sovereignty. With God’s help we’ll move this forward soon, and hope for your [i.e., Trump’s] support then, as well.”

Thank you @POTUS. For 52 years, we've also been thriving in Judea/Samaria. Also of critical strategic, historic and security importance. It is time that we recognize our sovereignty. With God’s help we'll move this forward soon, and hope for your support then,as well. https://t.co/eI0yWdcZUj

Smotrich, who has lived almost all his life in illegal settlements in the Golan Heights and the West Bank, is one of the Knesset’s most vocal promoters of Israel’s annexation of the West Bank. MintPress reported last year on a bill authored by Smotrich that would allow for the government regulation of 70 illegal Jewish-only settlements and allow Israeli Jewish citizens to purchase land in Area C of the West Bank, which accounts for roughly 60 percent of the total West Bank territory.

Smotrich and his political allies in the Jewish Home Party — who form part of the current ruling coalition led by Likud — have recently been pushing for Israel’s annexation of the West Bank so overtly that it prompted the UN to warn last July:

After years of creeping Israeli de facto annexation of the large swathes of the West Bank through settlement expansion, the creation of closed military zones and other measures, Israel appears to be getting closer to enacting legislation that will formally annex parts of the West Bank.”

Whether Trump would entertain yet another Israeli request for unilateral recognition of illegally held territory — such as the West Bank — is a matter of debate. While it is known that Trump’s largest political donor — Zionist billionaire Sheldon Adelson — was responsible for the Jerusalem move, it is not known if Adelson had a hand in Trump’s recent decision to recognize Israeli sovereignty over the Golan Heights.

However, the Golan Heights decision seems to be a combination of an effort to boost Israeli Prime Minister Benjamin Netanyahu’s chances of reelection in May as well as pressure from the U.S.-based oil company Genie Energy, which seeks to develop the large oil reserves in the Golan discovered in 2015. Genie Energy’s Israeli subsidiary, Afek, was granted exclusive drilling rights in the Golan by Netanyahu soon after the oil’s discovery and the company’s board is stocked with powerful people, including Jacob Rothschild, Dick Cheney and Rupert Murdoch, among others.

Past statements from long-time Trump advisor, and current U.S. ambassador to Israel, David Friedman, suggest that Trump is likely to honor Smotrich’s request if it is repeated by other Israeli politicians with pull in Washington or connections to Adelson. Soon after Trump won the 2016 election, Friedman claimed that Trump would support Israel’s annexation of much of the West Bank and even the entire West Bank, if Israel “deemed it necessary.”

The “Deal of the Century” meets Israel’s “Manifest Destiny”

Since then, the only likely impediment to Trump’s backing of such an effort would be the fate of the administration’s “Deal of the Century” aimed at brokering “peace” between Israel and Palestine. That deal, largely drafted by Trump’s son-in-law Jared Kushner, would be severely undermined and essentially dead on arrival were Trump to recognize the West Bank as Israeli.

While Trump’s willingness to continue granting U.S. recognition of Israeli sovereignty over any more contested areas remains to be seen, what is clear is that his recognition of both Jerusalem and the Golan Heights as Israeli territory has emboldened powerful elements of Israel’s government that have long pushed for the country’s expansion in essentially every direction. Indeed, even if Trump decides to recognize the West Bank as “Israeli,” it is unlikely that far-right nationalist politicians in Israel would stop there, given their ambitions in the Sinai peninsula, Lebanon’s offshore gas fields, and elsewhere in the region.

With Trump in charge, Israel is like a kid in a candy store with a green light to steal as much as it can, while it can ?. At some point, a new President will be sworn in, and many of Trump’s policies will be reversed (much like what happened to Obama). And when this happens, as much as the policy reversals may be welcomed, America’s global standing will further deteriorate, viewed by its existing allies as an erratic and dysfunctional ‘partner’ that can not be counted on.

All that said, guess who’s ecstatic with today’s news? The two Dems in leadership positions who spoke at the AIPAC conference. 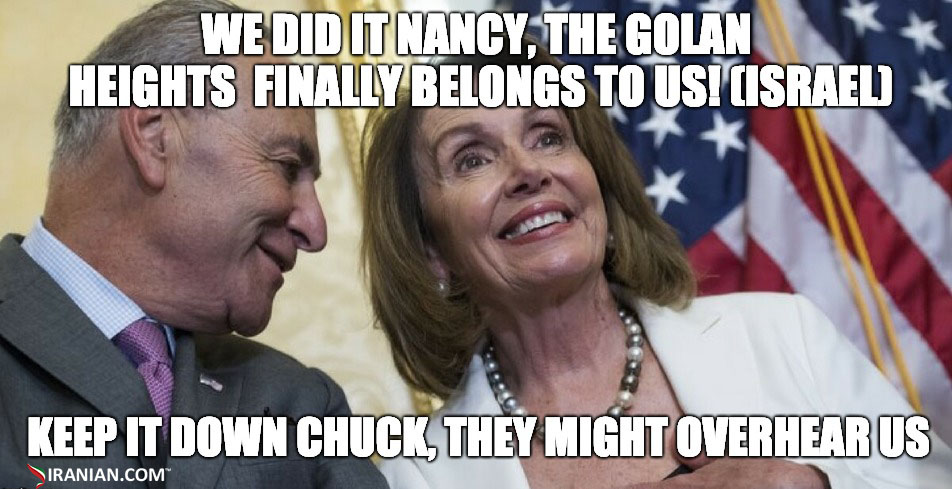 PrevPreviousRussian Troops In Venezuela Complicate U.S. Regime Change Plans
NextHezbollah Leader Hassan Nasrallah Is About To Respond To Pompeo’s ‘Arrogance’. What Will He Say?Next