Many of Trumps’ supporters who delve into their Bible from time to time have managed to see the likeness of Cyrus the Great in President Trump.

Cyrus was the founder of the world’s first major empire and “is mentioned 23 times by name and alluded to several times more” in the Bible. And a  few of his titles include,  “shepherd”, “anointed” and “smoothing the way,” which meant Jews’ trouble free return from captivity. However, Trump’s religious supporters refer to Cyrus as a ‘pagan’ king, only used by God for his purposes as Trump is today. Freeing the Jews was only one of King Cyrus’s great deeds. A byproduct of his vision for a new world.

Cyrus was a Zoroastrian but he did not parade his faith like Darius and especially Xerxes after him. The dynasty was young and he was its founder with little time to preach about his faith. But paganism should not be applied to the Achaemenid kings in general as the followers of the Abrahamic religions have conveniently done so over the centuries.  The influence of Zoroastrianism on Judaism which subsequently permeated Christianity and Islam is significant enough to take note of and acknowledge rather than ignore or deny.

“Both Judaism and Zoroastrianism were monotheistic. But before exposure to the faith of the Babylonians and Persians, the Jews had almost no conception of a dualistic afterlife composed of heaven and hell, or of an eternal soul. The cosmic conflict between God and Satan was virtually nonexistent. In fact, the earliest writings of the Jewish Bible depict Satan as an accuser who sometimes acted on God’s behalf, rather than the malevolent enemy of God who tempest humans to evil. There was no coming day of judgment, no bodily resurrection, and – unlike  Zoroastrianism – no messianic prophecy.”

Cyrus’ ethical behaviour was far ahead of his time. He lifted the standards of all the rulers of his time not excluding the kings of the Old Testament. Cyrus tried to win over his enemies with diplomacy first. He showed compassion and forgiveness toward his enemies in a world when only revenge and killing of your defeated foes was the norm. 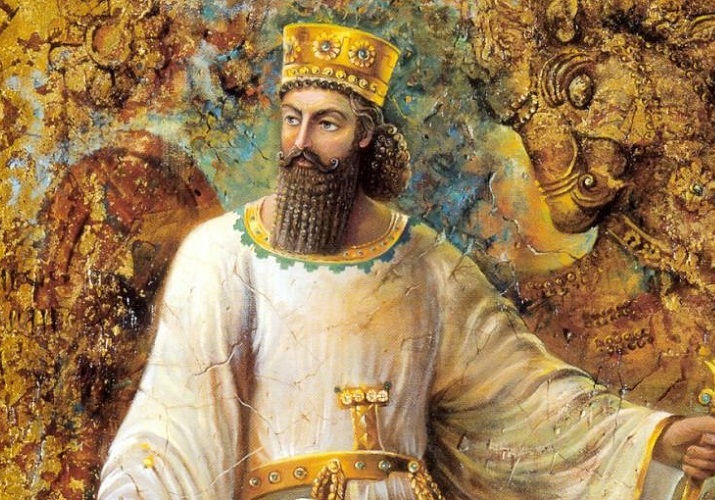 Cyrus the Great never compromised his morals or ethics. Upon Trump’s passage of visa restrictions on seven Muslim nations, it was obvious that Saudi Arabia, Pakistan, and Egypt managed to buy Trump’s conscience because the majority of the convicted 9/11 terrorists were from those three countries, which were conveniently omitted from the list. Was Trump’s visa ban really about terrorism? Does he really care who carried out the 9/11 attack?

Mercy, forgiveness, and respect for others were only some of the virtues that King Cyrus demonstrated.

Trump is looked upon as the liberator. But who is Trump liberating? King Cyrus freed the Jews from slavery in Babylon that’s why he was hailed as the liberator. He was equally welcomed by other nations who were being oppressed by their rulers. But where are the enslaved people now? People all around the world continue to fight for their rights against dictatorial regimes, and this is not anything new as it is an ongoing struggle. Trump’s siding with one oppressive regime (Saudi) against another oppressive regime (Iran) only proves that he is a man with double standards who lacks moral empathy with the oppressed.  Besides, where are the prophecies considering Trump as there were about Cyrus the Great? Some say he is the 45th president who is in synch with chapter 45 of the book of Isaiah which includes the prophecy about King Cyrus. I don’t think this coincidence is enough evidence to start a new Crusade as tempting as it may be for some or turn a blind eye on his blatant hypocrisy.

Another comparison is that both Cyrus and Trump were underdogs and came from nowhere to become influential leaders. This comparison is wrong again. Everyone in America was familiar with the face of Donald Trump from his television show, The Apprentice, and his business empire. He also appeared regularly on Fox News since 2011 criticising Barrack Obama, later even absurdly casting doubt on Obama’s birthplace and his American citizenship. America, however, was ready for someone like Trump as the Democrats listened less and less to the average American and many had lost faith in them.

The Greek writers by mistake referred to the Persians as Medes because they couldn’t believe the small obscure Persian tribe could achieve such amazing feats.

Cyrus, however, was virtually unknown in the ancient world. Equally his race, which was the vassal of the Medes. Unlike Alexandra the Great who inherited a powerful military machine in tiptop shape from his father Phillip, Cyrus created the biggest empire the world had ever seen virtually from nothing in mere 11 years. The Greek writers by mistake referred to the Persians as Medes because they couldn’t believe the small obscure Persian tribe could achieve such amazing feats.

Trump and his supporters should be reminded that Persepolis, which was the ancient city of the Achaemenids, did not have any walls around it. Why, because the early Achaemenid kings had no enemy that could remotely threaten them; such was the solid foundation Cyrus the Great built for the subsequent kings of his dynasty. Persepolis was also designed to be the world’s first capital city where everybody was welcomed. No longer any nation living in the vast Persian Empire was threatened by another hostile enemy. Making America great by putting walls around it is not going to fix any serious problems. According to Pew Research Centre, ‘there were more apprehensions of non-Mexicans than Mexicans at U.S. borders in the fiscal year 2017 for the third time on record’. Another research found, that it’s mostly American citizens, not foreigners, who are getting busted at the border trafficking drugs.

Persepolis was also designed to be the world’s first capital city where everybody was welcomed.

However, white extremism is on the rise in western democratic countries. Now, innocent people are threatened by both Islamic terrorists and white supremacists. Trump’s focus on U.S. southern borders only distracts attention from the worldwide terrorism which is becoming more and more sophisticated in operation inflicting massive casualties on ordinary people. But as  Trump and other incompetent leaders know scapegoating is a great way in not dealing with the root of problems.

The historical Cyrus is a multifaceted character who still demands our attention. He is a universal king who sets the moral standard and inspires world leaders to follow. Mercy, forgiveness, and respect for others were only some of the virtues that King Cyrus demonstrated. After defeating Astyages the Median king who fought Cyrus for three years, instead of destroying him, he ‘brought him to Persia. He was not impaled or flayed or fed to animals, but set up on a country estate. The Medes were encouraged to feel, if not exactly the equals of their conquerors.’

Even Alexandra the Macedonian king who conquered Persia paid his respect to Cyrus and ordered any necessary repairs of his tomb to be carried out.

“Cyrus had presented himself as a model of righteousness, and his rule a payback from the gods. People from across the vast span of his empire had duly scrabbled to hail him as their own. Astonishingly Cyrus, the man who had, in the awed words of the prophet Isaiah, made ‘the world tremble from end to end’ would be remembered with an almost unqualified admiration as the architect of a universal peace. For centuries afterwards, even among its bitterest enemies, the glow of its founders memory would suffuse the empire of the Persians. ‘He eclipsed all other monarchs, either before him, or since’. This verdict, not of a fellow countryman, but of Xenophon- an Athenian.”

To superimpose the American contemporary politics onto ancient history (or vice versa) is almost pathological. We can only learn from the past, especially from those leaders or episodes that challenge and sharpen our moral standards and expand our code of ethics and give us the necessary courage to do better, be fairer and integrate higher principles in our thinking.