Will Iran Be Forced To Close the Strait Of Hormuz? Between A Rock And A Hard Place

With the United States strangling Iran’s oil exports, Iran threatened to shut down the Strait of Hormuz, one of the world’s most important shipping lanes. On May 2, Washington will end all oil waivers granted to eight countries, including China, India, Russia, and Turkey, that import Iranian oil. This is all a part of the Trump Administration’s maximum pressure campaign to stop Iran’s “destabilizing” activities. Iran’s Major general Mohammad Bagheri stated that Tehran is “not after closing the Strait of Hormuz but if the hostility of the enemies increases, we will be able to do so.” Bagheri also stated that “if our oil does not go through the strait, other countries’ oil will certainly not cross the strait.”

The significance of the Strait of Hormuz is vital to understanding the Near East. While Iran presents itself as the gatekeeper of this waterway, other players like Iraq, Kuwait, Qatar, Saudi Arabia, and the United Arab Emirates are also involved. The Strait of Hormuz is the only choke point that goes in and out of the Persian Gulf and at its narrowest point between the tip of Oman and the Iranian mainland is a short distance of twenty-one nautical miles. This may sound like a decent amount of space, but the actual shipping lanes that carry 17 million barrels of oil per day (around a fifth of the world’s consumption) out of the gulf are only three kilometers wide in all directions. Iraq and Kuwait are major oil exporters on the Persian Gulf, you also have Qatar who is the world’s largest liquified natural gas (LNG) exporter that needs to get its resources through the Strait of Hormuz. The Strait is also crucial for the United Arab Emirates which is home to the region’s largest port in Jebel Ali that holds around 19 million shipping containers per year. We also cannot forget Bahrain, where the U.S fifth fleet is present. 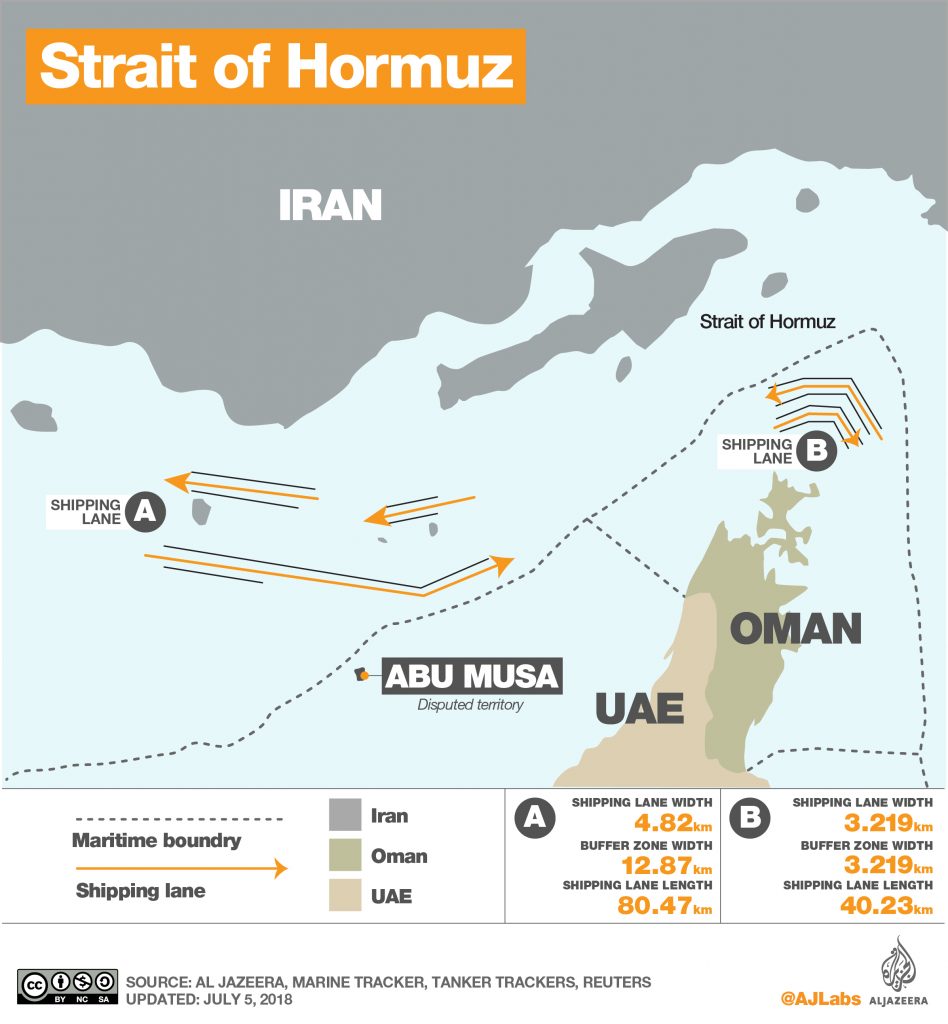 Closing the Strait of Hormuz is not a new response from the Iranians, and they have done this most notably in 2008 and 2012 as well. The Iranian government had some experience of putting some restrictions on controlling the Strait of Hormuz during the Iran-Iraq War in the 1980s, but what is different this time is that Washington’s withdrawal from the Joint Comprehensive Plan of Action (JCPOA) and its re-imposition of sanctions has only allowed Tehran to think cautiously about closing the strait as a means of sending a message to the United States that Iran could retaliate if it wanted to and that Washington should accept the fact that Iran is a strong power in the region that has regional influence like any other nation. If the United States does not achieve the goal of reducing Iranian oil exports to zero, the Iranians would not close the gateway, and we could avoid a major confrontation in the Persian Gulf. Iran feels like it is being backed into a corner by the United States, and there are very limited alternatives as a means of articulating its position in the Middle East. Looking back at recent history, it is very unlikely that Iran would close the Strait of Hormuz, but of course, we can never say never.

…a strategy that insists on getting 100 percent of what the administration wants while denying Iran anything it wants is doomed to failure.

The Trump administration has clear objectives for its policy toward Iran: Tehran should accept U.S. terms for renegotiating the nuclear deal it signed with Washington and other powers, end its regional activities, and halt its development of ballistic missiles. What the administration doesn’t have is a realistic strategy to achieve these goals. Pressure — in the form of military threats, economic sanctions and diplomatic isolation — can be an effective tool if it’s tethered to a comprehensive and realistic strategy that combines carrots and sticks. But a strategy that insists on getting 100 percent of what the administration wants while denying Iran anything it wants is doomed to failure. Iran’s exports can’t be cut to zero. The administration based its decision to cancel sanctions waivers on several assumptions: First, that Saudi Arabia and the United Arab Emirates would increase oil production to keep oil prices from escalating. Second, Iran’s major oil customers — including China, India, Russia and Turkey — would reduce their oil imports from Iran to zero under the threat of additional U.S. sanctions. Third, Iran has limited options to drive up oil prices to maximize revenues from its residual oil exports. Monday’s announcement by Secretary of State Mike Pompeo canceling sanctions waivers the U.S. granted to eight countries importing Iranian oil will bring the administration no closer to closing this gap. On the contrary, it’s a risky bet that’s likely to inflict greater pain on the Iranian public without changing Tehran’s behavior or weakening, let along changing, the government.

In this situation, the United States is playing the bully as the only superpower who can say or do what it thinks. During the years 2008 and 2012, there were sanctions by the Europeans, the United States, and the United Nations. Yet, Iran was able to export its own oil which totaled to around 2 million barrels per day, so it will be the same this time around in 2019. The Europeans have not put any sanctions on Iran and European oil companies are afraid of purchasing Iranian oil because they are worried about being targeted by American sanctions since the United States has a tight grip on the global financial market. What is uncertain is how far maximum pressure from the United States will go in terms of other countries trying to conduct business with Iran. Countries who import Iranian oil namely China, India, Russia, and Turkey will have to resist American sanctions and political pressure by protesting unilateral actions behind the scenes. In fact, Iran could be a pawn in the current U.S-China trade negotiations in a give or take situation.

Under the United Nations Convention Law of the Seas (UNCLOS), Iran is permitted to deny free transit passage to nations, like the United States, which have not ratified the agreement. If the United States interdicts Iranian shipping involved in the transit of oil, then it is most likely Iran will close the Strait of Hormuz to U.S. shipping, citing the 1982 convention as its justification. The United States would either be compelled to back down (which may be unlikely), or resort to military force, certifying it as the aggressor in the eyes of international law.

The military debate over Iran’s ability to close the Strait of Hormuz, and the U.S. ability to respond to such a threat, is moot—no insurance company will cover any oil tanker seeking to transit contested waters. The economic impact of any closure will be immediate, catastrophic, and sustained. Even if the United States prevailed in a military conflict over the Strait of Hormuz (and it is not certain it would do so), any victory would be pyrrhic in nature, with the United States sacrificing its national economic health, and that of the rest of the world, on an altar of hubris that fails to advance its national interests in any meaningful fashion.

Diplomacy is the only way out of this quagmire, but what we are seeing in this current crisis between Iran and the United States is a consequence of diplomatic channels being shut down and all avenues for dialogue have basically backed Iran into a position where it is unable to facilitate any other type of movement than to resort to defensive posturing. The Strait of Hormuz will not shut down as this would be too risky and quite frankly a red line towards a direct confrontation between Iran and the United States, but the stakes are too high for something catastrophic to occur in the near future.

PrevPreviousPlans Underway To Set Up Joint Bank Between Iran, Iraq, Syria
Next‘Microcosm Of Everything Wrong With US Foreign Policy’: Senate Fails To Override Trump Veto On YemenNext