Much anticipated data by China’s General Administration of Customs (GAC) detailing the country’s oil imports has been released on Tuesday, and shows that China has not cut its Iranian supply after the US waiver program ended on May 2nd, but has steadily increased Iranian crude imports since the official end of the waiver extension, up from May and June levels.

It’s been no secret that China continues to play a large part in preventing Trump’s desire to take Iran’s crude exports down to zero, despite a noticeable drop on its Iran oil imports compared to the summer prior (sinking almost 60% in June compared to a year earlier).

The new GAC data shows China imported over 900,000 barrels per day (bpd) of crude oil from Iran in July, which is up 4.7% from the month before. On a metric-ton basis, Iranian inflows rose 8.2% from June, but this marked a drop of 71.9% on the year, according to S&Pconversion figures (China’s GAC releases customs data in metric tons).

China’s June crude shipments from Iran totaled 855,638, averaging to 208,205 barrels per day (bpd) two months after Trump ended the waiver program, compared with 254,016 bpd in May, according the July GAC figures.

Simultaneously, China’s oil purchases from Iran’s rival Saudi Arabia have during this hot summer of “tanker wars” soared to record volume, in June reaching an all-time high of 1.89 million barrels a day, and in July dipping slightly to 1.65 million b/d. Thus far for the first seven months of 2019 Saudi Arabia has been China’s top crude supplier, with Russia and Iraq second and third.

Meanwhile, the United States hit the top ten list of China’s suppliers for the first time since August 2018, the eighth largest supplier in July, jumping 45% year on year to 1.53 million metric tons, according to S&P analysis of the Chinese customs figures. 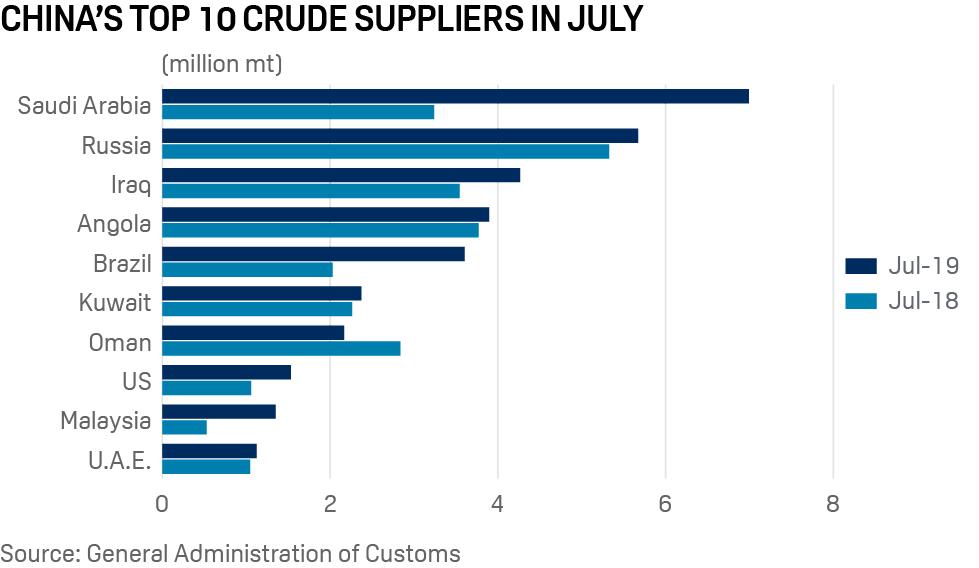 Crucially for Tehran, China remains Iran’s largest oil importer and a crucial lifeline for the regime’s economic survival. Over the past five years China has remained the largest importer of crude oil in the world (previously it was the US).

July’s official customs data was published just after Iran’s foreign minister Javad Zarif met with China’s Foreign Minister Wang Yi in Beijing while kicking off a tour of Asia to bolster support. This marked the third time the Iranian FM has visited China this year, as the top diplomat tries to reinforce Chinese support of Iran in its conflict with the US.