On match days Iran’s young female soccer fans cram Tehran’s shopping centres and cafes, their faces painted with the Iranian flag and beaming with excitement, as they follow their national team on giant television screens alongside male fans, reports Reuters.

Iranian women have been banned from men’s soccer matches at football stadiums in the country since the 1979 Islamic Revolution, but that has done nothing to dampen their determination to enjoy it.

Iranian female fans have long campaigned to be allowed to watch men’s soccer and occasionally a limited number of women have been allowed into the stadium.

The death this month of a female fan who set herself on fire in protest at her arrest for attending a match has drawn international attention to women’s exclusion. Iran is also under pressure from soccer’s governing body FIFA on Iran to change its stance. 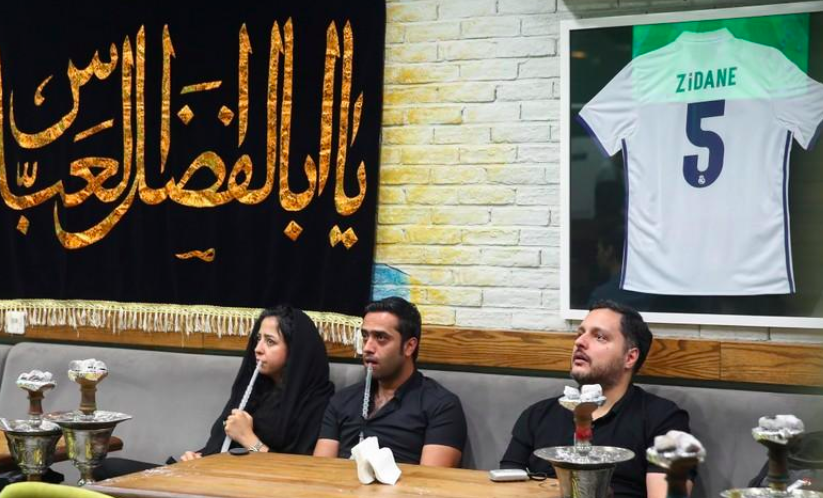 Following a match in a busy cafe, Iranian fan Somayyeh Rajabpour said “watching like this is more exciting.”

Another female fan, Mahsa Alipour said “All the people love it. They love soccer a lot. For me personally, although I may not know much about soccer, I am so excited by the games.”

Iranian President Hassan Rouhani’s chief of staff said last week that women would be allowed into stadiums if foul language in chants and sporadic violence was curbed.

“We don’t see a problem with women attending if the atmosphere in stadiums is convenient… but with so much foul language among fans and violence, this is not advisable,” Mahmoud Vaezi told state television.

Government spokesman Ali Rabiei told a news conference, “We believe that women can enter stadiums, but I am sure you agree that a portion of society is worried about their presence.”

He said women would be present at Iran’s game with Cambodia. “Their presence will increase step by step.”

The move is seen as a first step towards opening national games to women.

Vaezi said the sports minister would contact leaders of supporter groups to “improve the atmosphere from a moral standpoint” and special areas for women would be set up in stadiums.

Sahar Khodayari, dubbed “Blue Girl” after her favourite team’s colours, died in hospital just over a week ago after setting herself alight outside a court where she feared being jailed for six months. She had tried to attend a match disguised as a man.

“They do not let us inside the stadiums. But we were so good like this today, inside the shopping centre,” said Atieh, who was among a group of men and women watching a soccer game at a cafe in Tehran. “Men did not say anything improper at all, and we were all together, all fine, watching the match.”

A female architect, who did not give her name, said however that she objected to women at football stadiums, “because of the cultural problems we have, not just in grounds but even in our normal urban atmosphere.”

PrevPreviousThe Trump Administration Is Losing The Narrative Battle Over Iran
NextQuestions, Not Answers Surround U.S. Push To War With IranNext