Iran has committed a further breach of its nuclear deal with major powers by enriching uranium with advanced centrifuges, and plans to install more of those advanced machines than previously announced, a UN nuclear watchdog report showed on Thursday, Reuters reports.

Iran is breaching the restrictions of its landmark nuclear deal with major powers step by step in response to US sanctions imposed since Washington pulled out of the agreement last year. The deal only lets Iran accumulate enriched uranium with just over 5,000 of its first-generation IR-1 centrifuges.

The deal also caps the amount of enriched uranium Iran can produce and the purity to which it can enrich it, both of which Tehran has already breached, but only incrementally rather than by ramping up the level and amount as quickly as possible.

“On 25 September 2019, the Agency verified that all of the (centrifuge) cascades already installed in R&D lines 2 and 3 … were accumulating, or had been prepared to accumulate, enriched uranium,” the International Atomic Energy Agency said in the report to member states obtained by Reuters.

Those lines include relatively small cascades of up to 20 centrifuges. The report said Iran is still in the process of installing two previously announced 164-machine cascades of the IR-4 and IR-2m models, two cascades that were removed under the deal, which also lifted international sanctions against Tehran.

Iran says it has enriched uranium only for civilian purposes, but the United States and IAEA believe it once had a nuclear weapons programme that it ended. The deal was aimed at extending the time Iran would need to obtain enough fissile material for a bomb, if it sought one, to a year from 2-3 months.

Iran denies ever having sought to build a nuclear bomb.

Iran informed the agency in a letter dated Sept. 25 that it is reconfiguring its enrichment setup to add clusters of centrifuges including a 164-machine cascade of IR-6s, the IAEA said.

In its last update on Iran’s nuclear activities this month the IAEA, which is policing the deal, said Tehran had begun installing more advanced centrifuges – models other than the IR-1 that are only supposed to be used for research – and was moving towards enriching uranium with them.

The use or misuse of information is central to the conflict in the Middle East. There has been a growing need for supporters of, in particular, the Palestinian cause, to master the art of information gathering, analysis and dissemination. This requires well organised, focused and targeted operations. Such initiatives are virtually non-existent in the West today. The Middle East Monitor (MEMO) was established to fill this gap.

Past And Present In The Islamic Republic

US To Deploy Patriot Battery, 200 Troops To Saudi Arabia After Oil Attacks – Pentagon

US regime affiliated media says "Iranian backed," because they don't want to admit they are murdering Iraqi troops fighting ISIS

BREAKING: U.S. military carries out airstrike in Syria against facilities used by Iranian-backed militia, defense official tells @NBCNews, marking the first military response from the Biden admin. after a series of rocket attacks on U.S. targets in Iraq. 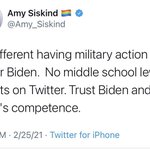