I have spoken with many in France’s huge expatriate Lebanese community – and from all groups – and not a single person has ever claimed that Iran was the power behind the scenes in Lebanon. Without fail, I was told that this title belongs to France.

Many Lebanese don’t like to be reminded of this, but Lebanon is an artificial nation which France constructed entirely on the basis of racism: just as Zionists to the south wanted a “Jewish nation”, Lebanon was hacked off of Syria in 1920 to create a new Christian-majority nation.

That’s a “no longer relevant” tale of divide and conquer to some, even though a few centenarians may still remember the actual event.

Thus, just as Israel is a little part of the USA in the Middle East, Lebanon is the older, French version. The saying, “Beirut is the Paris of the Middle East” could not be more correct.

And yet, were an alien to visit and read Western mainstream media coverage of the recent protests in Lebanon it would not imagine that France ever had any role in Lebanon, much less a prominent role there today.

Instead, Western headlines and reports all push the totally absurd claim that Iran has somehow become the neo-colonial master in Lebanon. Somehow – and via the poorest, most marginalised sectors of Lebanese society, no less – Iran has been able to usurp a century of French power.

Astute observers already realise that when it comes to the Middle East every problem – big or small – is blamed on Iran in the West.

Furthermore, despite the century of French involvement it is not France but Iran which is responsible for the corruption that has pushed so many Lebanese into the streets.

Apparently Iran took power and also became corrupt so very quickly that the Lebanese themselves didn’t even realise it! The idea is laughable.

Or perhaps: the Lebanese themselves don’t know what is actually going on in their own country – the West knows better.

These are the kind of ideas only a Westerner could believe.

The reason is simple: advertising works. Astute observers already realise that when it comes to the Middle East every problem – big or small – is blamed on Iran in the West.

However, what’s rarely examined is how this very real Iranophobia allows the West to obscure places where their neo-colonial machinations could not be more obvious, such as in Lebanon.

If it’s not Iran then it must be Hezbollah, but it can never be France

If the West cannot destroy Iran in 2019 they will happily settle for destroying Hezbollah. 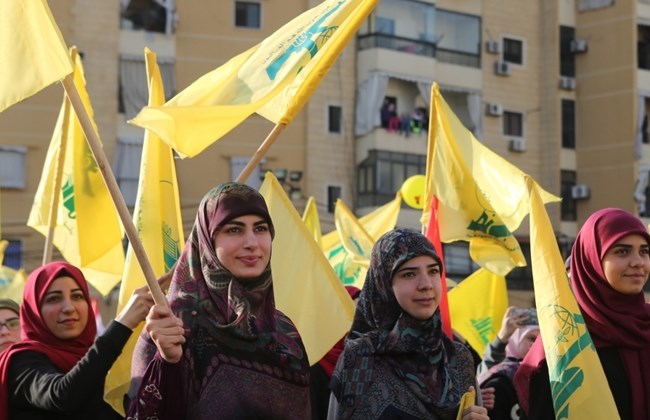 Hezbollah is the “Party of God” and the party of Lebanon’s poor, but many insist they are not a political party but a larger “resistance movement”. Amal is a political party allied with Hezbollah, and Western media coverage is doing their best to lump both in with the older, Western-aping, billionaire-backed parties which are the true cause of the recent corruption protests.

Hezbollah has always said they would never turn their guns on Lebanese, and even if the West doesn’t want anyone to know that the Lebanese certainly do. They know that without Hezbollah southern Lebanon would be called “Northern Israel” today. Or, nearly as badly, it would still be the State of Free Lebanon, that stillborn Israeli client from the early 1980s which no country besides Israel recognised. (That’s just more “no longer relevant” history to Western mainstream journalists of course.)

The West hates Hezbollah for the same reason Lebanon supports it – Hezbollah is what ensures Lebanon’s security from repeated, deadly, infrastructure-ruining Israeli invasions. After the 2006 war with Israel most Sunnis and an estimated 50% of Christians supported Hezbollah – that’s hardly sectarian hatred.

After saving the Lebanese from Israel on multiple occasions, the undeniable and enduring popular support of Hezbollah and Amal comes from their education, health and other social welfare organisations. Southern Lebanon is most notable not for being mostly Shia but for its extreme poverty, which was the result of decades of neglect from Paris-allied Beirut. Hezbollah and Amal helped reverse that, to the extreme embarrassment and consternation of France, Israel and their many sectarian militias, mafias and political puppets in Lebanon.

And yet despite being so late arriving to power, despite being anchored in the poorest regions, despite decades of neglect from Beirut, and despite illegal and inhuman US-led sanctions on Hezbollah… the West wants us to believe that Hezbollah and Amal are the ones responsible for the corruption at the heart of the current protests!

One has to wonder: if these two groups are so corrupt then where is the money, because it is certainly not in southern Lebanon?

The idea that Hassan Nasrallah, who can make a fair claim to be the most popular Muslim leader and hero in the world currently, is about to fall due to decades of corruption in Beirut is an absolute fantasy which can only be taken seriously in the West.

Again, what we have here is another situation where Western propaganda is aiming to manipulate legitimate unhappiness created by long-tenured Western client politicians in order to deny the West’s neo-colonial culpability. The legitimate demands in Yemen, Palestine and Iraq are all being portrayed as being caused by an Iranian neo-colonialism which does not exist, when the real culprit is the very real and very accurately-named Western neo-colonialism.

The West, of course, may speak of neoliberalism but never neo-colonialism.

I would imagine that up to this point a Lebanese reader has been quite bored – I have only relayed things which he or she already knows quite well. But perhaps a Lebanese expatriate in Brazil or the United States – who cannot visit Lebanon so easily and who foolishly relies on the Western mainstream media – may not know some of these things.

What most Lebanese know quite intimately is that they no longer have a “real” economy. Their export capabilities are so woeful that scrap iron was their third top export in 2017, at just $179 million.

This is unsurprising, because Lebanon’s longtime function was to serve as France’s Middle East banking haven, with Switzerland-level secrecy laws dating to 1956. However, they have increasingly been replaced by Qatar and other Persian Gulf nations.

Banking is still a strong sector of their economy, but now mainly due to the huge number of remittances (only 4 million Lebanese live in Lebanon but there are an astonishing 8-12 million living as expatriates).

All this wouldn’t be a problem if Lebanon had a strong government to centrally plan and direct their limited economy, and also a government which cared for their 99% instead of their 1%, but Lebanon has neither of these things. The reason for this has nothing to do with Hezbollah, but everything to do with the real root of the current protests.

After the Taif Accords in 1989 and the fall of the USSR in 1991, Rafic Hariri, who became Lebanon’s richest man/prime minister thanks to earning billions via construction with the House of Saud, embarked on the massive “Horizon 2000” privatisation plan, which sold off the major industries and real estate of the Lebanese people. Hariri, in classic Western fashion, privatised the people’s wealth mainly to himself, but also to French companies.

Hariri’s “There Is No Alternative” (to neoliberalism) plan also included massive efforts to attract foreign investment, which ballooned the national debt – the funds were not spent on the poor, of course, but lined the pockets of the rich. France is always the one who organises the regular international debt conferences to restructure Lebanon’s debt, reaping compound interest payments all the while. Rafic Hariri was yet another Arab aristocrat who yoked his people to Western debtors for generations.

Hariri also banned protests and encouraged bribes and kickbacks to the army in order to continue his neoliberalisation drive totally unfettered.

For these reasons (i.e., he made them rich via ruthless self-interest) the assassinated Hariri is worshiped in the West as a true martyr to the neoliberal faith, whereas his corruption in Lebanon was infamous and resented. The most common phrase about him is, “He treated the state as if it was his home.”

His son Saad could have hardly done worse, but he certainly has tried: $16 million to a bikini model mistress, getting abducted by the Saudis and then resigning on their TV, etc. Saad Hariri has held so very many closed-door meetings with France’s president over the past decade that I truly just got tired of covering it for PressTV – I think he must have a private room at Élysée Palace?

What I have described is three decades of oligarchic economic corruption, mismanagement and economic far-right neglect, and here is the bill: At 158% Lebanon’s debt to GDP ratio is the 5th highest in the world, just behind Greece.

Few commentators go further, however: Lebanon’s external debt to GDP ratio is only around 45%, implying that there is a lot of money in Lebanon but held – in an inherently corrupt manner – by extremely few hands. And this is certainly the case: Lebanon’s richest 0.1% own the same amount of wealth as the poorest 50 percent, making Lebanon one of the most unequal countries in the world.

Lebanon is thus an economically rudderless, economically unequal and economically corrupt nation, and it is quite obvious that none of this happened because of late-arriving, poor-loving Hezbollah or Iran.

It is absolutely preposterous to believe that Iran or Hezbollah is the source of Lebanon’s inequality and corruption, and thus that they could be the true target of protesters. The Western Mainstream Media – mostly privately owned, incredibly chauvinistic – is trying to sell an anti-Iran/anti-Hezbollah conspiracy even though the Lebanese themselves will not be fooled by it for one second.

The West, especially France, created, applauded and profited Lebanon’s economic corruption via their unstinting support for the corrupt and despised Hariris, and also Israel’s expatriate-inducing, infrastructure destroying invasions. France’s role in saddling Lebanon’s economy with two million of Syrian and Palestinian refugees is also glossed over by the Western mainstream media, of course.

I hope the true profiteers of Lebanon’s misery will finally be called to account. The Lebanese know who has robbed them, and it is not Hezbollah, Nasrallah or Iran.

Part 2 in this series will give more details on the corrupt Lebanese politicians of today, most of who are associated with violent militias armed and funded by France and/or Israel.