The Life Legacy of the Aslani’s

It is with somber sadness to witness and bear the melancholy of the passing of our community’s patriarch and matriarch, Hossein (Greg) and Fida (Olympia) Aslani within a week.

Hossein “Greg” Aslani Shahrestani, was born on 23 March 1936 and passed away on 28 January 2020 in Rockland County of New York; he would have been 84 in two months that always coincided with Nowruz, the Persian New Year in Iran and dozens of brethren neighboring countries. He was the last child in a large upper middle class family, at the time, in the village of Shahghaji of the Sangar region near Rasht in the Guilan Province, and situated along the sub-tropical Caspian Sea shores in Iran. The surname Aslan, meaning lion in Azari, may put his ancestry in Aslan of today’s Turkey or in similar regions of Apkhazia or Ossetia of Georgia in the western Caucasus.  He lost his father when only a tender toddler, and as his eldest brother became the head of the household. Physically and emotionally abused while subjected to servitude as an assistant from dawn to midnight in his brother’s grocery store, he remained lovingly close to, and protected by his progressive mother, who never married after his father deceased; later in life, he remained close with most his siblings and helped many of his nephews and nieces in education and their own life legacies.

Alemdpida BetYaghoub-Aslani (Olympia aka Fida) was born in 1927 and raised through her late teen years in Rezaieh of northwester Iran; Fida passed away only within a week after her husband’s passing, on 5 February 2020 in Rockland County of New Year. Fida worked six days a week, double shifts, both as a nursing aid at Shoravi (Russian) Hospital in Tehran and as a design dress maker in an upper scale tailor outlet in central Tehran. The couple married in their late 30’s, and remained the pillars of their community be it in Iran or in the U.S. for over eight decades.
As to Hossein Aslani becoming fast an adult, he rode on a truck after his primary education to move to Tehran when he resided with a roommate in a dilapidated room of an old house while he washed cars for a penny/yek gheroon (one Rial) off Ferdwosi Street. He also snuck here and there into the Lalezar’s live theaters and music shows, Shokoufeh Now and Moulin Rouge, Café Dehghan, Café Naderi, etc.

His first accessible musical instruments were the very cheap and widely available Neylabak (a Reed Flute), JeghJeghak, and Zanbourak (Mouth Harp), and the Harmonica. He then acquired and self-mastered playing accordion in his late teen. He was trained under the tutelage of renowned western classical music scholars of the era, in piano by Tatiana Kharatian, music theory and solfège by Feredun Farzaneh, and harmony, orchestration and composition by Houshang Ostovar.

Although Maestro (Ostad) Aslani had fast ascended the ladder of musicology nationally, his first radio-Iran salary to collaborate with the late virtuoso Mohammad Nouri and signed by Habibollah Badii, was an impressive $100 a month back in the late 1960’s when a teacher’s salary was a meager $25. His career was however, terminated by SAVAK, the notorious secret police in 1972, when he declined to compose a special music piece in honor of the Shah and the 2500 years commemoration of monarchy in Iran.  Right before this point, he had married Alempida BetYaghoub. So, they set out for the involuntary exile in the Promised Land of the U.S. of A! Except Aslani’s mother who had immediately embraced and welcomed Mrs. Aslani into their family, there was little affection by other family members toward her. Mrs. Fida Aslani swore her mother-in-law must have by pedigree, come from a Christian family since when she simmer cooked Persian Chamkhaleh Rice, she waved a hand cross at it before she put the damkoni top on, to ensure it was the best crispy Tahdig, remained, unburned. However, the mother had no idea except to reminisce she was simply copying her mom and granny from her own childhood.  Many here especially our children miss the many great Persian, Assyrian, Armenian and Rashti dishes she cooked and served us. After all, hardly a weekend went by idle as they invited dozens of similarly minded friends to their house every week. Then whether at their annual piano recital in the public library performance hall or at the special playing at the mega mall, one was hard pressed not to outpour sincere appreciations when the Aslnai’s were approached and embraced by large passing families.

Upon arrival to NY, the Aslani’s settled in Rockland County, Valley Cottage hillside district of Nyack, where Hossein worked as a solo accordion player and she as a medical assistant at the Tolstoy Nursing home, serving the Russian/Ukrainian Jewish seniors; The maestro’s playing of nostalgically emotional, and at times melancholic melodies of the distant past form Russia, the Ukraine and classical Ashkenazi or Mizrahi/Mountain Jewish pieces was most appealingly sublimed to the residents.  On the other hand, Mrs. Aslani’s command of eight languages (her native mastery of Assyrian and Persian, but also good level of Turkish, Kurdish, Rashti, Russian, Armenian, and English) became handy for their rapid popularity at the Nursing home and in the broader community. They obtained their U.S. permanent residence and later citizenships while living in that neighborhood in the 1970’s. Shortly after that, he set up his teaching atelier in his home and ran it as his most intimate passion for nearly 50 years, training up to 50 students per year, nearly a 1000 overall, until before his passing. He also continued on the side, composing/arranging music for the expat singers and played the keyboard, piano and accordion with bands in the New York Metropolitan area.  As a senior citizen, he returned to SUNY’s flagship music school in Purchase and earned a master’s, the terminal degree in music. Intoxicated with joy he truly exalted… and as he walked down the aisle on a wet and muddy green lawn in Purchase to the commencement stage to receive his diploma that May. The fact that by age he was the grandfather of most, if not all, his graduating student peers, was immaterial to both him and them alike. In life, he had always remained a child at heart and an adult just from right after birth. In fact, he not only enriched the educational experiences of his peers, but he also gave back to enrich the creative scholarships of his professors, as many still attest to it.

As he grew older, his yearning for return to self and his motherland, the village of Shahghaji in particular, grew much stronger. It is as if he was increasingly tangled in the two intertwined twilight webs of his maternal home and the adopted US, both of which he equally loved. This took him through a half dozen back-and-forth journeys to Iran amid the last twenty years of his life, where a new epiphany calling led him to literally liquidate his entire life long asset, their homes, and build two middle and high schools for girls from a few dozen nearby villages to Shahghaji who had no schooling beyond grade five before. Later, he returned to build a gymnasium, a library and a home economic workshop and equipment center for girls to learn sewing, embroidery, weaving, crafts, etc. Eternal words of gratitude bestowed upon the Aslanis, hundreds of these students of the past twenty years have since graduated from College and remain self-fulfilled in their career and personal lives.

He never drank nor did he ever gamble, smoke or inhale; and yet he was readily intoxicated when he was learning, writing, or teaching music, especially to the children with whom he was platonically most attached, or spent sublimed times with family and friends. He was surreally intoxicated when they would most frequently invite their friends from all walks of life, in their house to play music for them, and to serve them the best foods, as if it was their own “last supper”.

The callings and legacy of Hossein and Fida Aslani leaves a most uplifting impression on their family, students, peers, and friends. Maestro Aslani was with humility and gravitas a quintessential renascence human being committed to family and friends, his music, community, and humanity. They accomplished their callings through his passions, through his voluntarism, altruism, and philanthropy and left behind a crisp legacy. Hossein (Greg) and Fida B. Aslani will remain alive in our hearts and as the beacon of hope, will live on and they have and continue to enhance our good thoughts, words, and deeds. They will be dearly missed, as we all live by their having entrusted us with many pleasant nostalgia and way of life……. 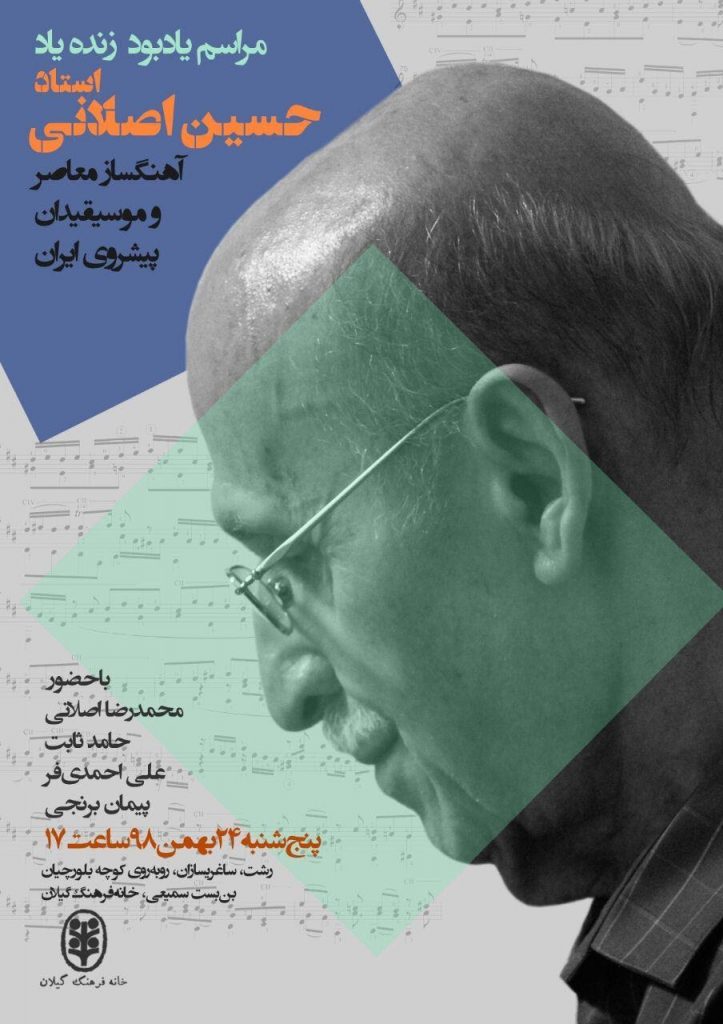 PrevPreviousUS promises ‘enormous pressure’ on Tehran over… failed satellite launch?
NextTrump’s Brink of War with Iran Spun on a LieNext