Politics of Pandemic: The story of the lie that went everywhere

In old Persia, there were no indoor bathrooms; instead, people went to public bathhouses to wash themselves. From early morning to mid-morning was merchants’ turn to bade and be ready for business, then was the turn of women and children who used the bathhouse from late morning to late afternoon, next came the farmers who went to wash themselves and be ready for the supper.

Joseph Goebbels, Hitler’s Minister of Propaganda famously said: “If you tell a lie, tell a big one.” For audacious lies are more likely to be believed; no one would believe that anyone is brazen enough to tell such a big lie. The article written by Graeme Wood and published on March 9, 2020 issue of The Atlantic Monthly is a case in point.

In this article, the author based on a number of Iranian officials infected with Coronavirus and bizarre estimations put the number of infected Iranians somewhere between 600,000 to 6.4 million; he eventually settled on 2 million infected. This article was published on March 9, 2020, less than three weeks after the first Covid-19 case was discovered in Iran. By the author’s calculation, therefore, there must have been between 30,000 to 100,000 infection a day. This is far beyond the rate of infection anywhere else. Notice that, as of this writing, the official numbers stand at 78,000 infected with a little more than 5,000 death. 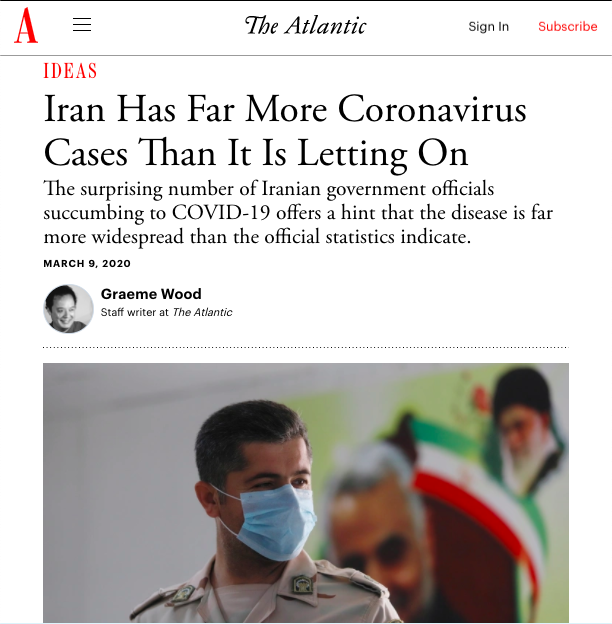 A Lie this big, from a publication that prides itself as a prestigious analytical magazine, is unexpected, to say the least. True or not, the article is nothing less than propaganda aimed at destabilizing Iran. To understand his bizarre calculation, one does not need to go any farther than the magazine’s own editorial orientation, a believer in American exceptionalism and advocate of regime change in Iran. An example of magazine’s editorial orientation is seen on May 6, 2018, in a published article by Reuel Marc Gerecht titled:

“The Nuclear Deal Keeps America From Confronting Iranian Aggression: Once Trump is out Washington can get serious about the regime’s misbehavior.”

Notice the clear promotion of American Exceptionalism in the language and use of cliché: “Iranian aggression.” The term ‘Iranian aggression’ here is a contradiction; if anything, it is the United States that has carried more aggressive acts against Iran than the-other-way-around. Later in the article, the author, in direct reference to American Exceptionalism writes:

“Contrary to what Barack Obama often suggested, the West is special, and it’s the anchor for a moral order that keeps much of the world from descending into a Hobbesian state of nature.”

Later in the article, once again, the author emphasizes the moral superiority of the West:

“Americans and Europeans as the ultimate good, more important than, say, corralling and defeating the Soviet Union; stopping a savage, aggressive, weapons-of-mass-destruction hungry tyrant in the Middle East; or thwarting the Iranian regime’s quest for the bomb.”

The ethnocentric language and use of words like  “savage,” “aggressive,” and “weapons-of-mass-destruction hungry tyrant” clearly defy any pretense of objectivity, or for that matter, journalistic impartiality. At this point in his writing, the author is no longer a journalist, but rather an ideologue who is propagating a specific ideology. So much for a 163 years old publication that sits on the right of the political spectrum and considered to be a solid example of American Journalism.

At this point in his writing, the author is no longer a journalist, but rather an ideologue who is propagating a specific ideology.

Graeme Wood, a proponent of regime change in Iran, often writes about Iran, fancying the imminent collapse of Islamic Republic. To make his point, without mentioning the widespread rumor that circulated before the parliamentary elections in Iran, the author gives this explanation for claimed Iranian officials’ lie.

“Why would Iran lie? On February 21, Iran conducted the latest in a series of sham elections in which only government-selected candidates could run for office. To show disapproval, many Iranians refuse to vote, and as participation has dropped, the appearance of electoral legitimacy has dropped as well.”

“Iran’s government told its people that the United States had hyped COVID-19 to suppress turnout, and Tehran vowed to punish anyone spreading rumors about a serious epidemic. Forty-three percent of Iranians voted, unaware that the outbreak had already begun. Quick action could have allowed quarantines to be put in place.”

There is a certain amount of truth in this statement, in fact, there is a relation between Coronavirus and elections in Iran, but not the kind that the author describes.

The Lie that Goes Everywhere

In late January 2020, a rumor began circulating in Iran’s social media that there had been 300+ coronavirus-related deaths in Qom. The rumors came along with a warning that crowded places such as voting stations are the least safe place from virus. From then on, different news organizations and other media outfits have been busy speculating about the number of infections and death in Iran.

The first report about Coronavirus in Iran came from Mujahedin-e Khalgh; the cult-like organization that is struggling to be relevant in Iran’s political landscape. Known for its occasional fabrication of news about Iran the organization circulates its propaganda among Western press, and those who are eager to write negative news stories about Iran. MEK also controls a large number of social media accounts that it uses to spread rumors and propaganda against Iran.

On February 26, a week after the virus was first discovered, the organization reported 750 Covid-19 related death in Iran. Six days later MEK put the number of deaths at 1300 and by March 26 according to MEK the number had reached to 11,000, that is about 1300 death a day. Another six days later, MEK reported 16000 death and as of this writing it stands at 24,000. Even in countries that at one point were the epicenter of the virus such as Spain, Italy, Great Britain, and the United States, where the number of deaths had reached beyond 10,000, the daily death record rarely reached 1,300. Unless for some mysterious reason laws of science ceases to exist in Iran, the numbers are wildly exaggerated. However, the lies did not stop here; on April 7, 2020, Jerusalem Post put the number of infected persons at half a million, more than that of the United States, the latest epicenter of the infection. From this point on, western media ran away with the story. Fox news quoting MEK claimed that Iranian officials knew back in January of the spread of Coronavirus but did nothing about it.

On March 12, two weeks after Covid-19 was discovered in Iran, Washington Post published a satellite image of what it claimed to be a mass grave in Behesht-e Masuomeh. On March 12, Haaretz quoting MEK reported 1,800 were deceased. Around the same time, Benjamin Netanyahu came up with a video as proof that Iran was covering up the Covid-19 related death. Later it was discovered that the video clip was fake and taken from a television series by Hallmark titled “pandemic.” These wildly exaggerated reports were widely circulated in US media blaming Iranian officials for gross negligence. Exaggerated reports of death and illness continued until early April. It all but stopped when it became clear that their prediction of unprecedented and astronomical deaths in Iran did not materialize.

And this was the story of the Lie that went everywhere, as for Truth, no one has seen him anywhere.