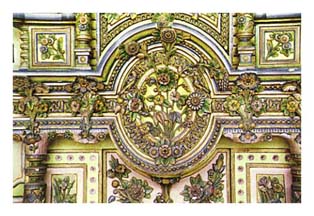 One of my relatives just came back from a three-week trip to Iran. "So how was your trip?" I asked. He began telling one horror story after the other. About the 80-year-old woman who had been locked up like an animal by her adopted son because she had changed her will to include another relative. "I cried and cried when I saw her. She must have lost 100 pounds. She was walking around half blind with a broken broom stick."

And about parties where the consumption of booze and opium are just as common as tea and pistachio nuts. And the spread of heroin addiction among the village youth. And the prevalence of abortion mainly for popultion control, even though it is still illegal. "One doctor told me he had performed more than 300 abortions in just one year. " And prostitution and poverty and bureaucratic corruption and ...

After 10 minutes, my hearing rapidly vanished. I just stared in his eyes and shook my head now and then. My relative went on and on for at least half and hour. Except for a few words like "elections", "mollas", and "revolutionary guards", I remember nothing.

"Would you like some tea?" he asked. "Tea?" he asked again. "Yes... Yes!" I said, and as he stepped into his kitchen I went and sat on the couch and turned on the TV. As I leaned to put the remote control on the table, I noticed a large book. It was a book of photographs by Mansour Sane' called "Fars" (Foundation for Fars Province Studies, Shiraz, 1995).

There were pictures of open landscapes, ancient landmarks, colorful mosques, grand homes, delicate tiles, mirrors and handicrafts. And I felt so relieved. We're okay; everything will be okay, I thought.

Send your Comments to: [email protected] Copyright © 1997 Abadan Publishing Co. All Rights Reserved. May not be duplicated or distributed in any form.