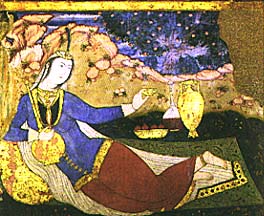 By Mahvash Shahegh
August 1997
The Iranian

Snake's Marble is primarily a memoire of the writer's life in her hometown of Mashhad in the northeastern part of Iran during the 1940s and 50s. It is a collection of Persian history, literature, religion, folklore, social life, tradition, costume and much more.

Mrs. Reid with her vivid photographic memory describes every aspect of her life in great detail. Her interpretation of Persian culture is interesting and will be most appreciated by the second and third generation Iranians abroad, most of whom have lost their connection with their roots.

This effect is most clearly illustrated in her description of why the nightingale is referred to as "hezardastan" in Persian literature: "My father's brother was a master of the 'tar'. Late one summer night, when he was visiting us, he stole off by himself to the gazebo, where he sat and softly played his tar by the light of a full moon. As he played, a nightingale from somewhere in the orchard began to sing. My uncle would stop his playing for a few seconds; then the nightingale would sing in answer. This continued for couple of hours, with the bird coming closer and closer to my uncle, until the bird was perched just a few yards away on one of the rose bushes. I and my brothers and sisters lay in our beds around the courtyard pool listening, enthralled by the impromptu concert performed in the moonlit dreamlike setting. Every time the nightingale sang, it was different melody. That is why the nightingale is called 'hezardastan' in Farsi, meaning "thousand stories." (p.8)

Hundreds of similar insights can be found throughout the book. This type of historical reporting is loosely woven together with the story of the writer's life. Unfortunately, this preponderance of undocumented and sometimes inaccurate information intrudes on the reader's ability to enjoy the narrative. An example of inaccuracy is when she talks about the old religion of Iran. She says: "The ancient holy book, Avesta, which is a collection of the teachings of Zoroaster, founder of the first official Persian religion, contains a part known as the Kata (the correct form is "Ghatha") that is believed to be the oldest Persian collection of hymns for worship. Persian classical music, which developed during the Sassanid period before the Islamic conquest, has influenced the music of all of the countries of the Middle East." (p.7) Big claim, no documentation.

Both aspects of this book, the memoire and the history, would be served better separated from each other. Perhaps the majority of the too often distracting historical subtext would best be represented in footnotes. Despite the divisiveness of these competing aspects, the "Snake' marble" is a good candidate for online publishing in Web style, allowing one to access the extra information if one so desires. In this way, one can easily skip the intrusive information.