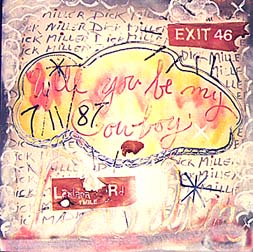 "Will you be my Cowboy?"

It wasn't very practical, but what the heck? I wanted to do something for my mother. She was living in Florida at the time -- spring, 1988 -- and I was in London. "I think these are my best work ever," she said over the phone. "Really, they are the best."

She described her latest paintings in detail and great excitement but I was having a hard time imagining. She mentioned spray paint, playing cards, pieces of wood, even underwear. They sounded too wild, even by her standards.

When we lived in Abadan, I used to sneak behind bushes (she didn't want to lose concentration in moments of intense inspiration) in the back of the house, watching her pour paint from cans onto large fiber boards, moving them up and down and sideways to merge the rich, sometimes shiny metallic colors into abstract shapes and lines. Those explosions of color that hung on every room in the house are still fresh in my memory. My favorite was the quiet, graceful, awesome Persepolis in black, red and gold.

Back then my mother's name was Shirin Bakhtiar Javid. Then it Radha MacRoberts. Then White Cloud. Today (August 1999) it's Rose Ghajar.

And was her new work even better than in Abadan? I had my doubts.

Anyway, it didn't matter. I told her I would try to find a place where she could exhibit the paintings. But I worked long hours, six days a week. And I had no idea where to start looking. Then I thought about the modern YMCA building in central London where I used to go swimming couple nights a week. I spoke to the art director and she said it was fine with her. Free wall space for a couple of weeks by the cafeteria. Excellent.

My mother was in heaven. An exhibition in London; her first in at least 20 years. She shipped a dozen paintings (all of them about 5 x 5 feet) and set them up with great excitement. When I saw them for the first time, I was shocked and amazed. I loved them. Indeed her "best ever." (see below)

We argued over price tags. Finally, nothing under 500 pounds, we decided. Days went by. A radio interview and lots of compliments from the YMCA crowd, but no buyers. Gradually less and less time was spent at the Y and we began to make the best of her time in London. We visited museums, saw old friends and, at her insistence, went by Elizabeth Barrette Brownning's flat.

One day, shortly before the show ended, I went to pick up my mother from the Y. She looked all excited.

Well, Chuckee, if you do surf the net, here's another chance to see the paintings:

Copyright © Abadan Publishing Co. All Rights Reserved. May not be duplicated or distributed in any form.