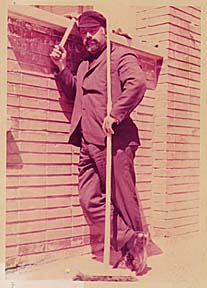 In February 1997 a ceremony was held in San Jose, California to mark 50 years of artistic achievement by Hannibal Alkhas, one of Iran's most influential modern painters.

Hannibal was born in Kermanshah, Iran, in 1930. His father was Assyrian writer Rabi Adai Alkhas, and his Uncle John Alkhas is considered one of the best Assyrian poets of the 20th Century.

Hannibal spent his childhood and teenage years in Kermanshah, Ahvaz and Tehran. In 1951, he came to the United States to continue his education and studied philosophy for three years at Chicago's Loyola University.

From 1953 to 1959 he attended the Art Institute of Chicago where he earned his bachelors and masters degrees in Fine Arts. After the death of his father in 1959 he returned to Iran and began teaching at the Tehran School of Fine Arts for nearly four years.

During that time he also established the successful Gilgamesh gallery, the first modern art gallery in Iran where aspiring young artists were introduced.

In 1980, Hannibal was once again back in the U.S., and spent twelve years teaching art at the Assyrian American Civic Club of Turlock, a private colleges, and the University of California at Berkeley and Los Angeles.

He now teaches at Tehran's Open (Azad) Islamic University, a position he has held since 1992. He also holds private painting classes and writes as an art critic in various Iranian magazines.

Here are samples of his most recent work (1996).
Six centuries
Tree of life
Crucifixion
Assyrians
Looking at Goya and weeping
The great queen
Three eras
The dove of peace
Tribute to Rodin