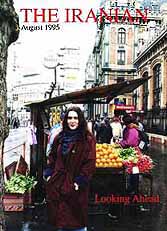 First promotional cover of
THE IRANIAN

The following are comments from distinguished members of the Iranian community about THE IRANIAN:

Ahmad Ashraf, September 14, 1997: The electronic magazine THE IRANIAN has provided an invaluable service to the Persian community in the United States and other parts of the world in the two years of its publication.

Its high journalistic standards, professionalism, and objectivity, combined with innovative and engaging style, make it one of the most appealing electronic sources of information and news coverage for those interested in contemporary Iran.

Mr. Jahanshah Javid, the founding editor of THE IRANIAN should be congratualted for his tireless efforts, his professionalism, open-mindedness, and, above all, his passion for Iraninan culture.

Hossein Bagher Zadeh, Sepember 3, 1997: Congratulations on two years of incessant service. As a person who has had first hand experience in setting up and running a weekly publication for the Iranian diaspora, I can fully understand the range of problems one faces in such an exercise and the amount of (diverse, and at times, conflicting) demands an Iranian publication is expected to meet.

You have done a great job, and I have found THE IRANIAN fair and informative and a pleasure to read. Certainly the best Iranian netzine around and one of the best in Iranian journalism worldwide.

Shirin Etessam, September 15, 1997: THE IRANIAN is one of the most intelligent magazines online. I truly have no need to subscribe to any other Iranian publication online; the information that I need to know is not only at my fingertips, it's literally on my screen every morning when I open my email. The news is timely and unbiased.

I know that Jahanshah Javid gets a great deal of heat from time to time for presenting all perspectives on a subject, but we as readers deserve no less.

Ebrahim Golestan, July 1, 1997: I wish you great and progressing success. This not only because you are you, but most importantly because keeping your objectivity is very much needed in the business of informing the Iranian diaspora. There is a lot of ignorant malice around and I hope that you will help in dispelling it.

Farhad Kashani, September 4, 1997: As a part-time print journalist for the last 17 years I know how much hard work it will take to publish a magazine. Congratulations for creating the first serious Iranian web newsletter. You kept me informed about Iran the seven months that I lived in Taiwan where anything Iranian was a novelty and scarce commodity.

Habib Ladjevardi, September 5, 1997: I have grown accustomed to my daily reading of THE IRANIAN Times email service. Although I receive news and comments about Iran from other sources, none provide the breadth and depth that has become the trademark of THE IRANIAN. The daily email messages remind me that I am part of a large Iranian community. Thanks so much for making my day more meaningful.

Farhad Sepahbodi, September 15, 1997: Congratulations on the Happy Anniversary of THE IRANIAN. It is irresistibly readable. The structure is skilful too, and it gets better all the time. Your team and kind contributors keep the stories moving forward, word by word, paragraph by paragraph, in runaway-locomotive style.

And thanks for the many striking pictures and photographs! For my part, I will never forget the magazine cover photo of the Iranian cowboy mounting a black stallion with Isfahan's celebrated bridge in the background.

Last and not least, our gratitude to JJ for his very unique Bulletin.With it he has managed to keep us in constant touch with a multitude of topics.

I hope that someday and through such sustained endeavours from our compatriots, our society will finally achieve liberty, civility and the "One Free and Democratic Nation" we all aspire to.

Amin Sepehri, Sepember 2, 1997: I get the feeling you are trying to be everything to every Iranian, and sometimes more. Perhaps that is the nature of this beast, the electronic magazine. Search engines and database manipulations allow for it and I guess the dedicated reader could just select what he wants. My problem is that I think that is what editors are for, making the selection so that I could spend half and hour or so a day, for a few days reading it cover to cover. I know it's asking too much.

Anyway now that the nitpicking is done (contrary to the American system where they start with praise and then comes the but), I can say that I think you have done a great job under very difficult circumstances. THE IRANIAN is an asset to Iranians everywhere who have web access. Besides I think it stands beyond that as a very well done web magazine, an example to many others with much greater resources than you.

The overload and complexity may just be the result of growing pains, I don't know, you may choose to make it even more all-encompassing, or you might choose to cut it back and make it tighter and more selective. It will be an important decision. I regularly skim through your weekly news service. I think it is an important part of the magazine and extremely useful to Iranians who want to know what's going on vis-a-vis Iran without having to thoroughly witness the media.

Roya Zamanzadeh, September 8, 1997: What makes THE IRANIAN great is that it enables us to relate to our rich culture. It is one of the pioneeing Iranian sites that has remained interesting and challenging. And it is also one of the most progressive and informative.

Ali Zarrin, September 18, 1997: At a time when millions of Iranians abroad are scattered all over the world and they need to imagine themselves as a community with a common destiny, magazines such as THE IRANIAN assist them in defining their new identity. Also, an online Iranian magazine in English allows many of the second generation Iranians to readily access the culture, history, and literature of their ancestors.

We can hope that with our support and readership THE IRANIAN will survive the diaspora and improve itself continuously to meet the challenges of such a dynamic era in the lives of all Iranians.