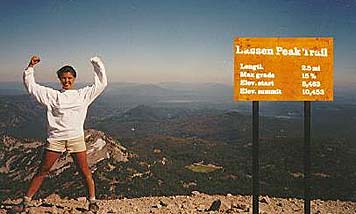 On loan to the world

On Monday, July 28, 1997, my little princess (that's what Sara means in Biblical terminology) left on a 27-month tour of duty with the U.S. Peace Corps.

Having just graduated from the University of Maryland with an Agronomy degree, she's determined to put her stamp on the world by taking a shot at trying to eliminate hunger as a Peace Corps volunteer.

At her age, I too wanted to do the same via a permanent world revolution to eliminate class societies, uproot poverty and hunger, and create a world where ancestors' wealth did not determine individual well being.

Do you see a resemblance?

I was, and still am, highly political (though not the made-for-U.S. type, but the advanced-articulation-and-social-intercourse kind.) She, conversely, does not give a damn about politics, of any kind, period. So if somebody discusses Democrat-vs-Republican politics in front of her, she'll interrupt by saying she's about to throw up; that both parties are corrupt to the bone and that truly free human beings do not need such leaders.

Well, we are similar in many ways, especially in one major way: We're both very sensitive to, and aware of, our surrounding world and everything in it.

When she was very young, we picked up trash from public parks (way before the recycling movement started) and volunteered at the only homeless shelter in Oklahoma City. Her activist spirit continued in high school and later at University of Maryland when she was the president of the Ecology Club.

She also learned at an early age (from her mother and I) to respect all life forms. She took this respect a lot further. She became a vegetarian on the day she turned thirteen. Not that she did not know the importance of animal protein for human growth, but she decided that conditions under which animals were farmed, raised and slaughtered, was inhumane.

Both of us have also been arrested for standing up for our ideas and ideals. So, even though her politics are different than mine, I get the chills when I see her listen to, and carry out Bob Marley's lyrics "Get up, stand up, stand up for your rights. Get up, stand up, don't give up the fight..." I see her keeping my ideals alive.

I could not carry out my idea of permanent world revolution (the world wasn't ready for it) or change it to my liking. So I'm going to leave it to somebody who may be able to.

The world needs many many more Saras for a fundamental change. She's our contribution to our world cause.