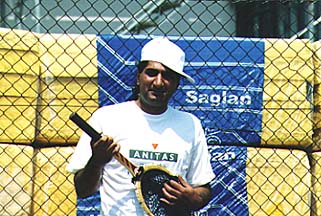 I don't know how many times this has happened to me. Someone calling me, talking like s/he's my favorite sister or my elder brother and I don't even know who it is. Sometimes they're so friendly and know so much about me that I think I'm at the other end of the line myself.

There's something (not that I know what it is) that makes us behave different on the phone. Have you detected this too? The voice changes, the gestures, the whole manner is different.

Although there are people like my khAle tAji who shouts in the phone in a way that she could talk directly overseas without using a phone. But usually we mellow down our voice. These are some common manners we all share more or less.

What disturbs me is that Iranians rarely introduce themselves when they call. In Iran it's not common to say who you are. We usually say "alo" and wait for the calling party to talk. Even in Germany or Italy they pick up the phone and only say "Hallo" or "Pronto". But in the rest of the civilized world the calling party tells her/his name.

Here in Switzerland when the phone rings you pick it up and say who you are:

And so on. Easy hey? you pick up the phone and say "salAm man kharam" and the calling party says "salAm khareh, man shoqAlam".

I use my surname at the office and my first name at home: "Ja, hamid" (Ja= Yes). Don't think this goes without problems. My mother after hearing this for many years took all her courage together once and said: "hameh migan yA ali, to cherA migi yA Hamid?" Begzarim.

Now that I'm dardodeling here is a funny thing: Some 50 years ago telephone exchanges were operated manually. Old telephone sets didn't even have a dialer. Your home phone was connected to an exchange. Well, the exchange was a desk with sockets for phone cable jacks and red lamps. When you picked up the phone a red lamp would light on the desk. The operator would see it, connect her headphone to your phone, you would say to whom you want to talk, she would ring the second party and connect you. If you wanted a new connection or there was something wrong with the connection, you would tap on the phone.This would make the red lamp go on and off and get the attention of the operator to talk to you.

Today after many decades, in an era of modern telephony with digital exchanges, people still tap on their phone when there's something wrong with their connection. bAbA beh khodA, today's connections are made automatically, there's not a single soul in the digital exchanges.

Well, in fact, there is someone: in each exchange there's an operator and a dog. The dog is there to keep the operator away from touching the exchange and the operator is there to feed the dog. But playing with your handset does not change anything.

Anyway: khAnumA, AqAyun, for the sake of politeness, if you're calling me, say who you are. I'm not good at recognizing voices I have never heard. Even if you're a friend of mine, say who you are, don't make a puzzle out of it. Life is too short for that.

Other articles by dAyi Hamid:
* tArof bi tArof
* Why change a name?
* Eat this
* Homosexuals

Send your Comments to: jj@iranian.com. Copyright ® 1997 Abadan Publishing Co. All Rights Reserved. May not be duplicated or distributed in any form.

ed or distributed in any form.