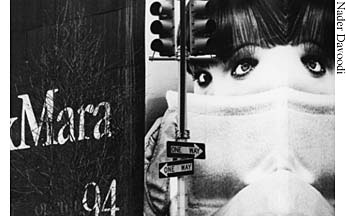 To you closet Iranians

By Kimberly D. Martz
The Iranian
May 1977

Who wants to be a "closet-Iranian?" Could I get a show of hands, please? No one? None of you out there want to remain anonymous citizens of Iran, while perpetrating other cultures for yourself - Italian, Greek, Spanish, Mexican? I'm relieved to hear that. I had thought, perhaps presumptuously, that Iranians in American were but shadows on the waters. If that offends anyone who is reading this article, I apologize. It is not my wish to offend, but to ascertain views on this phenomenon I have come across here in America, an astounding discovery that both shocks and disappoints me - Iranian culture in America is virtually non-existent.

But wait, you say. There are at least 1.2 million Iranians living here today, populating cities, walking down hospital halls, orating in courts of law, studying in the universities. Well, let me rephrase the question. Why aren't Iranians in America a more prominent group here? Lack of great numbers, in comparison with Italian or Spanish peoples? No, I don't buy that, not one bit, and I'll tell you why.

I have three Iranian friends that I know personally - one is a college student (we'll refer to him as "Vincent"; another a writer for an Iranian-American magazine in Washington D.C. (let's call her Samileh) ; the last, an older gentleman who works in a gas station here in my town (how about Ismail?). Quite a diverse group, seeing as they come from the same culture. These three have been the only people to open up to me and share their heritage with me; not even the thousands of young Iranian-Americans whom I've met on-line have done so much, despite my efforts to learn from them and embrace what they hold dear.

The point is, these people, to me represent the variable in my experiment in discovering new horizons in Persian culture, and the rest of the population, my control group. What am I getting at? Bear with me, I do have a point. In coming to know these three people, I have gained not only friendship, but also knowledge. Vincent, a rather unconventional Iranian, even in my opinion, taught me the value of being curious about the uniqueness of another culture. Samileh, she taught me to be brave enough to share my views and express myself in the midst of people I felt sure to offend. Ismail, well, he taught me the beauty of listening and the joy of hearing the simple story of a man's life, a man who has lived in this country for 10 years, but has never called it home.

Since I have known these three people, I have often wondered at the lack of interest in Persian culture, not only by Americans, but by Iranians themselves. "Iranians are not proud to be Persian here," one man told me. "I know men and women who tell people they are Italian or Spanish. They never speak at all of their Persian background." What a shame. What a shame that such a people can be ashamed of who they are.

I don't think if Rumi, Hafez, or Khayyam were here today, that they would exhibit the same non-activity that most Iranians in American society display today. Samileh once told me she felt the reason most Iranians are close-mouthed about themselves is that ". . .there is still a lot of hostility towards Iranians even here (Washington, D.C.). . ." Samileh wasn't even born in Iran, but she still gets a lot of negative feedback from the community she lives in, along with assumptions of what she should be like from friends.

Vincent, who goes to a large southern university and is involved with a diverse group of people himself, expresses too the prejudices he encounters on campus, from religious groups trying to "show him the light," to professors suggesting that he change his name if he wants to be more accepted in academic circles there. Ismail says he's not come across any great divide between himself and others here in Auburn. "Every day I go to my job, and every day I smile at the customers, talk to them. People here are very friendly. They don't ask me questions like you do, but no one has been negative towards me."

I can see how negative reactions and comments would effect an Iranian here in America, but isn't that why there are Iranian communities to begin with? Aren't these organizations designed to support not only the Persian peoples here, but also to educate others so that these misunderstandings occur less often? When Persian concerts come to the larger cities, or art exhibits, poetry readings, and lectures, shouldn't these things be open and offered to everyone interested in attending them?

I've tried contacting several organizations in the Atlanta, Georgia, area and have yet to find anyone willing to talk to me about these things and how I can be involved. The seemingly "shy" nature of some Iranians has me thinking that perhaps it isn't shyness at all that holds them back from sharing more of their culture with people like myself, but apathy. Good ol' American apathy, apparently a disease that catches the moment you enter the country. While not everyone is subject to its horrible effects, the results are definitely tragic.

How do we slow down, if not completely halt, this tragedy of non-activity within Persian culture? Show a little interest! I am not suggesting that we all drop our busy schedules and head for the library right this minute, or go to a museum only for the Persian art displayed there. What I am suggesting is that the Persian communities be more open about themselves. How many people are missing out on all the great literature, food, and just plain unique people that live here and call themselves Iranians? Thousands? Millions? More? Why not do something to reverse the stereotypes that have been set for yourselves?

There are many Iranian magazines and newspapers here in America. Why not distribute them more widely, make them available to people besides those with a Persian background? Knowledge is the key to reducing prejudice and apathy with regards to any culture present here today. Don't you think it's time that more people (besides myself) took an interest in what Persian culture actually is? This American does.