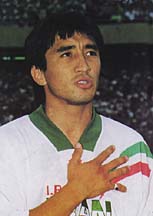 A bucket of sand

I never cared much for soccer. It never ignited much interest in me as it did in my friends. The game never grew on me enough to make me want to be a part of it. In Iran and later here in the U.S., I never followed soccer closely. It was part of my heritage, but then so are shirin-polo and baabaa karam and I never cared for them either.

Having lived in the U.S. did not help the matter much. I followed American football, took up a fanatic interest in Los Angeles/Oakland Raiders and, of course, the mighty Lakers basketball team. The year in sports divided in two parts: fall was devoted to American football and spring to basketball. Soccer was a distant memory like the pastry shop near Amaniyeh in Tehran. I could remember it if I tried -- but why try?

Why? The reasons arrived one by one in the past few months.

It started with a piece of gossip I heard about a distant relative. A few months ago -- and after watching the Iranian team making a goal on TV in the middle of night -- the man jumped so high that he hit the chandelier, which came crashing down on him. I was actually glad the chandelier was torn down; it was a kitsch piece of bad design, but the fact that the game had excited him so much made me wonder what I was missing.

Then came bits and pieces of information through conversations here and there. The Paraguayan shoe-repairman near my house chewed my head off one morning about his country's team and a guy named Jose Chilavert, the goal-keeper. It was as if Chilavert was his son and he had just performed the first brain transplant operation. A Mexican hot dog vendor near my work talked of Luis Hernandez and his famous attack as if this was a military general on a battle against the Spanish colonialists. Our Czech information officer at the office has been so excited in the past few weeks that he is like a live wire -- I'm afraid to be near him -- and the Czech team is NOT even represented in the World Cup. He is excited only because he wants to see teams like Germany and Austria be decimated by the likes of Argentina and the Netherlands. He has never forgiven the Austrians and the Germans for mistreating him when he was a refugee!

And of course there is this close friend of mine, who thinks he is both Iranian and Brazilian. Every time the Brazilian team plays and Ronaldo comes on the field, he sits two feet away from the 42-inch TV and watches the game as if in a trance, caught in an empyreal world that, he says, is known only to the real soccer stoics.

All these made me dig into the soccer mania deeper and get involved in the hysteria of the World Cup. But it was still unnatural to me. I still could not get myself hyped the way I do for American football, and the Iranian team didn't do it for me the way the Raiders bring my blood to a boil.

That changed when I saw an interview with an Iranian player on TV. It was a Thursday night around 1 a.m. One of the Iranian channels in LA was broadcasting an interview with Khodadad Azizi -- an interview they had shamelessly (how else?) stolen from the Islamic TV. It may have been the time or maybe it was the quiet of Thursday night, but most probably it was Azizi that did it for me.

The man, who seemed Turkman, and was hailed as the best Asian football player of 1996, showed such great nobility and grace in his words, gestures and overall conduct that he made me stay glued to the TV. In between there were footages of his plays for both the Iranian team and FC Koln in Germany where he plays professionally. I felt my blood boil for the first time for his style of soccer and the way these players attacked the opposite team and passed the ball between themselves. That was it. I was now a soccer fan and soon learned of the rest of the team: Ali Daei, Karim Bagheri, Abedzadeh and so on.

And then came the final motivation I needed. Last week, ten days before the World Cup started, the Los Angeles Times featured a whole section on the teams and their prospects. I rushed to Group F and Iran. There were the usual comments about problems with coaches and the U.S.-Iran game and so on. But there was a comment at the end where predictions were made. It said: "...three games and back to soccer on sand."

I'll be home this Sunday, glued to my TV trying to enter the trance of soccer stoics. I will watch Iran march on the field in France to face the Yugoslav army (sorry, I meant the Yugoslav team), and if they win, and if they beat the U.S. team next, I will personally hand-deliver a bucket of sand to LA Times.

* Also by Ramin Tabib:
- The woman back home
Never met her; want to marry her

* A profile of the Iranian team