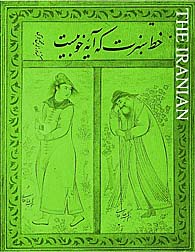 All my life, I have looked at every potentially interesting man and found him in so many ways deficient. They are never as intelligent as my father, nor are they as romantic as he is (my parents still wrestle and giggle after 30 years of marriage). The men I meet are usually not politically passionate, and frequently they are not erudite enough. They haven't read as much as I would like them to, and they are not open to experiencing all the luscious vagaries of life. These men haven't seen the world, and often they are not familiar with both literature and philosophy. Sometimes, they can't play backgammon, and often, they underestimate the simple joy of a decadent meal surrounded by friends and fueled by wine and music. And they rarely, just rarely, look upon women as intellectually equal counterparts, whereas all my life, my family expected me not to be any less than any man.

"Not finding the perfect man" sounds much like the stereotypical tale of woe one is supposed to hear when straight women gathered to bond. But I differ from my American or European friends in one way: my ruin -- my inability to ever find a man who will satisfy my every desire -- is complicated by the fact that I have nationality problems. I am a woman of two countries, two passports, two cultures. In the thirteen years I have been in the United States, I have become that particular brand of Iranian woman who does not necessarily fit either the standards of manner of Iranians in Iran or the exacting demands of the Iranian community in the United States. I am independent to the point of seeking solitude, I am aggressive -- easily labeled unladylike -- and I emphatically decide how I think, what I do, where I go, and whom I become. I have chosen whom to date and until recently have avoided dating Iranian men. In other words, I am a difficult woman.

Like many hyphenated Americans, I chose to walk away from my point of origin, to assimilate, to become "American." I shed my accent and swallowed my Third- World politics. In leaving behind Iran, I left behind the notion of ever loving an Iranian man: that meant a return in my heart. And to harden my resolve, I built a cliché of the Iranian man in my head: a chauvinist, a traditionalist, a man who could never resemble my father.

My evasion of the Iranian men was exacerbated by an incident at the library of University of Texas when I was a sophomore. Bending down to get books from a lower shelf of the stacks, I heard three young Iranian men talking in the most fascinatingly obscene Persian vocabulary about some poor woman who apparently was showing too much "leg." Their lexicon was so resplendent and their declarations so incredibly creative that it actually took me a while to realize that the target of their phallic ruminations was me, whom they took to be something other than Iranian. If I hadn't found the whole episode so completely comic, I would have clobbered them with the heavy copy of the unabridged English dictionary on the stand in the corner. As it were, I walked by them quietly and said to them in a Persian stage whisper, "You know, you have to be careful about who overhears what you say." The stricken look on their faces was reward enough.

I stereotyped the Iranian men into various categories. I desperately avoided the slick BMW-driving, cell-phone carrying, disco-going, chauvinist pigs. I made friends but kept my distance from the tortured and tormented ones who had gone through hell in Iran and had come out scarred. And I ran from the respectably boring men desperately ready to settle down and have a family with a respectably boring woman (of good family). There were other stereotypes. Ultimately, they were all men with Iran in their souls and Persian on their tongue, and Iran frightened me.

All these years, I dated non-Iranian men. I even once fell in love with an American man, and I know that despite my mother's support, this love that crossed borders alarmed her. The non-Iranian men were easy to date. They would never presume to tell me what I could do and what I could not, what I could wear and what was "too much," and I was never afraid of meeting these men's parents. They were after all not Iranian, and therefore my shameful ignorance of ta'arof would not embarrass their sons. I had so abandoned the Iranian in me that the nationality of these men was never a dilemma for me, as long as they were not Iranian.

Throughout this time, I received those surreal calls from the second cousin of somebody's uncle's sister-in-law. During these calls, a woman you have never met asks you about your marital status in a gratingly superficial honeyed voice, and wants to know whether you are interested in a nice gentleman from a good family who is either a physician or an engineer. Sometimes the gentleman is looking for a green card. On other occasions, his family has heard about what a good family you hail from, and would love to ensure the health and wealth of their offspring through an agreeable marriage tie. I was always rude to these callers, and I generally ignored the emails I received from admiring men who had seen my profile on America Online. After a while, I reduced my profile to nothing but my name, but my name gave me away as Iranian and thus eligible.

And I steadfastly avoided "the Iranian man."

Then, I changed. During the middle years of my twenties, I looked at the landscape of my life, and found it barren in its absence of Iran. I was saturated with a love so deeply buried and so profoundly suppressed that it only took changing my entire life to be able to stare my beloved, Iran, in her bloodshot eyes. I quit work and returned to graduate school to know and do more about Iran, and a little later I returned to Iran after twelve years.

I don't know if it was serendipity or just an element of this restoration, but around the same time, I fell in love with an Iranian man. He was wondrous and he negated all my archetype of Iranian men. In his exuberant intelligence and his unwavering sense of justice, he was like no one else. He was also a hyphenated American, an articulate man, a human of great integrity, and a gentle person. He had traveled around the world, he recited Hafez' poetry to me, and took me on long walks in dark streets. We loved many of the same things, knew many of the same people, and wrote each other long -- sometimes funny, sometimes profound, and always sexy -- emails about life, politics, and love. He believed in me and supported me in ways I never had imagined anyone would.

Loving my Iranian man, more than anything else, was learning to look at the world through his unblinking honest gaze. I learned from him compassion, and I learned to shed my elitism, my pretenses, my lust for violence. My Iranian man has brought immeasurable reserves of joy and awe to my life. He has made telephone calls magical events, checking email an exercise in breathless anticipation. My Iranian man has taught me much about devotion and respect.

But I have learned that loving an Iranian man is not an easy task. I suddenly found myself under subtle pressures from my mother, whom I was certain was already fantasizing about her new "doomad". She would relentlessly ask about him when she called, sometimes even before she asked about my studies and my life. She would remind me how wonderful this man was, though she had never met him. All relatives, in fact, instantaneously consider your Iranian man a candidate for marriage.

Loving an Iranian man is not easy, because in the small circles of Iranian friends, a new couple becomes the object of discussion and speculation. The love has to grow in the light of this scrutiny. Loving an Iranian man involves far more protocol than dating an un-Iranian man. There is the architecture of ta'arof, there are the scrolls of family trees, and there are -- most importantly -- political allegiances which don't often coincide.

An Iranian man is more aware of the etiquette and abroo amidst a group of other Iranians than an American man would ever be. An Iranian man cares about your public behavior more than an American man does, even if he is a feminist: after all the new love has to withstand scrutiny. Loving an Iranian man is tantamount to having to love his family. The Iranian man, no matter how Westernized, still retains a special bond to his mother which is like nothing I have seen among un-Iranian men. And there is always a question of whether you can or want to return to Iran together at some point, and for how long, and why, and under what circumstances.

But perhaps the hardest thing about loving an Iranian man is that love becomes not a celebration, but an end-driven blueprint. We are acculturated to believe that marriage is the ultimate goal of love, and this constant impulse motivates and shapes the relationship. We imagine the children we will have before we even know each other's secret vices. We imagine the wedding day when we should have concentrated on the daily enterprise of keeping love's flame safe.

We have thousands of years of Leili and Majnun, Farhad and Shirin in our mythological history and our nightly fantasies, and our notion of love is painted with such bold brush-strokes that we sometimes forget the simple joys of having a yaar. Those simple moments of companionship sometimes disappear in the shadows of the vast melodramatic role models we have romantically, sentimentally perhaps, adopted.

For a woman who straddles two cultures, and who is perhaps more accustomed to the clamorous freedoms of the American one, loving an Iranian man, ultimately, has the same rewards and burdens of facing the White Deev of history, mythology, and culture. If you conquer the Deev, you will achieve shared languages, shared genetic memories, shared histories. The war of conquest is a bloody one, though, and many a pahlavans (whether Rostams or Sudabehs) have been laid to waste in battle.