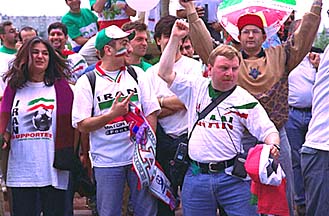 U.S. vs. Iran: More than a game
On and off the field

The soccer game between Iran and the U.S. on Sunday was surely more than a game. It was unfortunate that as hard as the American and Iranian players tried to keep it a friendly game, many side agendas were lurking to inject their venom.

As expected, ABC turned the pre-game show into an episode of "Nightline," circa 1980. To have done justice, perhaps ABC could have shown footage of 1953's CIA-staged coupe, but that would have been too informative to the unsuspecting Americans and may have disturbed the cozy image that some people may have of Iran ever being anything other than an eternal cradle of fanaticism.

FIFA had done its darndest to keep the politics out of the game on the field, but it had no control over what went on off the field. Earlier in the week, there was the ugly incident of the French hospitality when one of their TV stations rebroadcast that Holleywood model of big-budget ignorance, "Not Without My Daughter" for the umpteenth time. Perhaps they had found out some French cheese farmers living in remote areas of "Fromage du Crescent" hadn't seen the movie in at least, oh, say, five weeks, and their fading stereotypes of the wife-beating, daughter-kidnapping, camel jockeys needed fresh reinforcements. We'll show those backward Asians to come into our country and, heaven forbid, expect a respectful treatment.

Then there were those Iraqi-based symbols of enlightment with their attempts to hijack the game and turn it into an impromptu election campaign with only one presidential candidate.

Wisely, the two teams transcended beyond the charged atmosphere. Iran came with bouquets of white flowers which they handed to the American side. Americans reciprocated with souvenir pins. Despite the edicts of those control freaks in Iran whose sole purpose in life is to push intrusive laws down the throats of the masses (and who had asked for Iranian players not to go through the ceremonial T-shirt exchange at the end of the game), the Iranian heros exchanged T-shirts with any American player who asked for them. They were also most courteous during the course of the game, helping each other up after a knock-down.

The usual pundits like Brent Musberger of ABC TV spewed their familiar, cliched Sunday-afternoon wisdoms in order to put to exhibit their vast soccer knowledge. It was entertaining to see how these broadcasters insist on making fools of themselves by giving "predictions," especially when none is asked. Why predict three-zip and four-zip scores when you know nothing of the game and if nothing else, set up the average American audience for major disappointments? Brent Musberger (perhaps some Iranians thought his last name sounded like a great new food idea fusing an Iranian side-dish with a popular American fast food staple) proudly proclaimed "Three-nil, America all the way, BABY!" Stay tuned to see if he wins an award for the worst Dick Vital impersonation. (For those of you who live "abroad," Dick Vital is an American basketball commentator).

At least, ABC didn't have that annoying female soccer-caster look-alike from the ESPN-2 sports channel who after numerous mutilations of such a hard sounding name as "Iran," finally settled on a Spanish sounding interpretation of it, "Ear-rrrrrrrrrrraan," thus assuring herself an award for the category of "Most Creative Way Of Unnecessarily Complicating The Name Of A Country By A Brain-Surgeon/Sportscaster."

Despite the favorable result, Iran did not play a good game compared with that against Yugoslavia, even though a fierce defense came through when it had to. Their passing was not crisp. They were lax in the mid-field, allowing Americans too much space and enough room to establish a passing game. If this was a ploy to draw the Americans in and then stage counter-attacks, it worked extremely well. Team USA improved its offense compared to the Germany game, but they badly underestimated Iran's offense and its counter-attacking style.

U.S. had figured that by covering Daei and Azizi tightly, which they did, they would completely neutralize Iran's offense. They didn't figure on the whole of Iran's team being offense-oriented. They had no answers for the speed and skill of Mahdavi-kia, the rising star of Iran's soccer. In the absence of goals from Azizi, Daei and Bagheri, Mahdavi-kia was the main offensive engine, cutting through the American defense with dazzling speed, time and again creating havoc and opportunities, ultimately setting up the first goal and scoring the second. Bagheri sent several long passes over the defense to Azizi which repeatedly exposed the weakness of Sampson's 3-5-2 formation. Thursday's game against Yugoslavia will most likely be Sampson's last for the U.S. team.

Iran started the game tentatively, perhaps fazed by the incredible set of internal and external pressures, expectations, propaganda campaigns, and a constant media barrage. Still, after the initial 15 minutes of the game, Iran began to exert itself. U.S. missed some excellent chances early and paid for those misses dearly. Iran missed on some golden opportunities as well, but converted enough to win the game.

The first goal started with a fast counterattack led by Mahdavi-kia, some great footwork by Zarrincheh and a golden pass in the middle of the defense to Estili, who headed a spinner at the perfect spot, over and way out of the reach Keller. This was the type of goal that Daei normally scores. The second goal came on another fierce counterattack and some very quick passing. This goal was almost identical to the equalizer against Australia in November, when Daei sent an incredible pass through to Azizi. This time, too, Daei who was handcuffed most of the game by Eddie Pope, passed a beauty through and Mahdavi-kia dribbled 30 yards down field and blasted a shot past the last man, a diving Keller. By this time, the U.S. defenses had completely come apart. A minute later on yet another breakaway Daei raced past the defense and for a second Iran teetered on the verge of a 3-0 display of power, but somehow Keller blocked the first shot. Daei scrambled and got a weak roller off which a U.S. defender stopped at the goal line.

Team USA committed two cardinal sins accounting for their poor results: First, they were badly intimidated by the Germans in their 2-0 loss. Then, they severely underestimated Iran's abilities, not adjusting their defenses accordingly. Iran on the other hand, has been unintimidated by its two opponents so far, nor has it underestimated either one.

Officiating in this game was very dubious. On a breakaway, with only Keller to beat, Azizi was tackled from behind, which is supposed to be an automatic red card. That didn't happen, perhaps because Azizi retained his balance and still had a chance to score. But a second later, the last defender, Keller came out and went directly for the body and knocked Azizi down. That was an obvious penalty that didn't get called, not even a free-kick. In retrospect, it's best that Iran's victory was not tainted by the controversy that would have certainly followed a red card or a penalty kick against the U.S. even though a free-kick was the least the ref should have called.

Later in the game, Azizi got a terrible knee in his inner thigh which briefly knocked him out of the game and he may not play against Germany, and that was not called either. Later, a U.S. shot that hit the post was ruled a corner kick, even though it clearly didn't touch anyone.

There were other bad calls or missed calls as well. A frustrated Stewart should have received a yellow for unsportsman conduct for not playing the ball and trying to push Khakpour into the goal just as U.S. was scoring its goal.

When it was all over, and those announcers with their wishful and unsolicited predictions didn't look particularly soccer savvy, they scrambled to portray the loss as a stunning upset. A stunning upset would have been had if Iran had beaten Yugoslavia. This was a victory, however stunning, but not an upset. The underlying motivation for using this sort of terminology is what's so prevalent in the media, and not just in sports, but in every aspect, that nations such as Iran are regarded as inferiors and with disdain. That's why some of you may have heard the hosts of an afternoon radio show proclaim on Monday "You beat us in soccer, so what? We can still carpet bomb your country in three days." Surely, these guys missed the point of the game.

In light of all the undertones, overtones and baritones of the game, it was no surprise that it had been overblown to unrelated dimensions. So many Iranians all over the world regarded this game as a way of regaining due respect. That's why a victory meant far more to the average Iranian, and even to other Muslim countries, than to the average American. Had U.S. won this game, you would be at a loss to find any American celebrating the victory, let alone pouring into the streets at 1:30 A.M. For Iranians, a victory was to be remembered for ages, just as many still remember the 2-1 victory of Iran over its arch-rival, Israel in 1968 for the Asian Cup.

For a country that hasn't had many occasions to celebrate for the past two decades, and plenty of occasions for doom and gloom, opportunities like this are far more precious. In the face of two decades of the nation going through revolution, war, internal strife, exile, economic ruin, foreign invasion, terrorism, falling Scuds, the "world arrogance," and numerous natural disasters, Iranians have had a tough time watching their identities under constant attack, maligned, belittled, insulted, misportrayed and generally discounted. Soccer has been an unlikely tool in rebuilding a part of that eroded identity.

It was unfortunate that the U.S. had to represent a symbolic enemy, but there is much symbolism in Iran scoring a victory against the U.S. It was not just a soccer "game." It's the same symbolism that the legend of Arash-e-Kamangir so profoundly embodies and Kaveh Ahangar so angrily represents. To score a goal was to strike a blow against an illusive enemy whose misadventures have played an integral part in the misfortunes of an ancient, wounded culture, a theme that repeats itself so many times in the Iranian myths and goes to the core of the people.

Estili's running down the field screaming after the goal represented the explosion of decades of frustration against colonialism and repression, external or internal, against a Zahak who fed on the brains of the youth of a nation. The scream of Estili was Arash's releasing of the arrow at his last gasp.

Or did I mistake this all, and it was just a game?