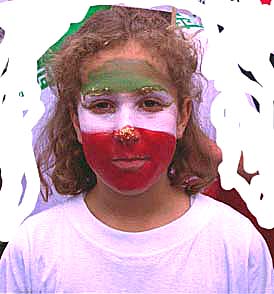 Delirium
The good kind... before, during and after the Iran-U.S. soccer match

How can I explain how I felt yesterday? How can I find the words to describe the intense array of emotions that went through me all day yesterday? I had not slept for many nights in a row. I tossed and turned each night, wondering what might happen at The Game. Will we win? Will we tie? A loss was unthinkable. I had completely blocked that thought from my mind.

Saturday night, my heart was beating fast. I got up and started pacing the floor, back and forth, back and forth. I thought about the boys and what they must have been feeling. My heart went out to them, my prayers followed. I remembered the unkind words in the Los Angeles Times: "... three games and back to sand occer." My anger rose. But then I started to laugh. What a moronic comment, I thought.

My excitement grew as each minute went by. Finally it was dawn on Sunday. There wasn't much time left until the start of the game. I ran to my uncle's house where friends and relatives had gathered around. Time passed, sometimes quickly, sometimes extremely slowly. And then the athletes entered the stadium. I saw the boys' beautiful faces as they walked onto the field one-by-one. What joy they brought. They stood standing along side each other singing our national anthem. I was trembling inside. And the offering of flowers -- what a genuine display of kindness and class.

When the game began, I immediately felt myself dissolve into our players. I saw my soul soar across the miles and become one with them. With every fall, I felt pain. And when Azizi was fouled in the penalty box, I yelled, I screamed. I loathed the referee for ignoring the foul. Then I heard myself say: "Don't worry, there is a God after all. " I was immersed in the game, almost completely oblivious to who was around me or what they were doing or saying. I was oblivious to the fact that I had already ripped the magazine that was in front me to a thousand pieces. I could not hear anything but the sound of the ball rolling on the field. At some point, I caught a quick glance of my 90-year-old grandmother who had tears in her eyes and was saying a prayer. I closed my eyes and prayed: "God, whatever you do, please don't disappoint my grandma ."

I was burning with a myriad of feelings. Passion was rushing through my veins. Football is not just a game, it's national pride, it's culture, heritage, power. And this was not just a game. In my eyes, we had to win. We just had to. I was joyous. I was angry. I was a nervous wreck. I was dying. Over and over and over again I was touched when our boys extended their hand to help their opponent from the ground.

As I was watching the game with every bit of my soul, I kept looking at top corner. How much time was left? Were the boys tired? How were they feeling? And then came the 41st minute. I quickly saw the setup and knew something was about to happen. Every corner of my being was screaming inside: "GO... GO... GO..." And then came the header. What power! What style! What finesse! What beauty -- right there, in a single instant. As the ball landed in the net, my heart sank for a second, and then rose to heights I never knew existed. I never knew I could jump so high. And tears. There was not an end to the river that broke the dam and was now flowing forever.

I saw Estili's face. So ecstatic. So extraordinary. I saw the endless hours of hard work etched on that beautiful, happy face. And I heard a nation scream with joy. Now I could relax a bit. But it was not over by any means. I hugged my grandma and told her in Azari: "Mamaji, we made a goal!" In between laughter and tears, she managed to say: " I have been praying for months." I kissed her wrinkled face and ran to hug someone else. Anyone. I had a few minutes to call as many people as I could. No one said "hello" anymore when they picked up the phone. It was all screaming and yelling. Someone told me they were in the middle of "espand dood kardan" for the boys.

When the game continued, I was alot more brave and confident. I loved our boys. When Khodadad went down, my heart broke in an instant. His face showed intense pain, and that pain broke every single bit of me into pieces. As they took him out on a stretcher, I felt I wanted to do something to take the pain away. Anything. But I felt so helpless. And who could contain the crowd when he came back? No one had heard so much noise. All throughout the game there was tremendous noise and cheering, but it was now thunderous as he stepped back onto the field.

And so the game went on. And my heart kept pounding, one eye on the ball, the other on the clock. At one point, the Americans got so close. I wanted to watch so badly, yet I couldn't take it any longer. My eyes closed. A second later someone shouted: "Tamoom shod! Tamoom shod!... Hich kari nakardan... " Someone else yelled: "Shokr-e khodaa, orzeh naaaran."

The second goal: I couldn't believe it. The boys sang-e tamoom gozaashtan. This was my country, my people. Running, shooting, striking, scoring. Winning. The last whistle was my moment of pure joy. A joy I never felt before. A rapturous delight, a frenzied excitement. This was my nation that had just won. How can I tell you how I felt? There was relief, there was ecstasy, there was a tremendous sense of deliriousness. What I felt was more than that. Something was pummeling through me with an astounding power. Something unstoppable. It was an extreme sense of national pride. And what pride it was. I was proud of each and every single boy on that team. What pressure they must have felt coming into the game. The eyes of every nation were on them. And they gave them a performance that will never be forgotten.

And so we took to the streets. It was impossible to stay indoors. We couldn't contained ourselves. Thousands and thousands of Iranians were dancing and singing. Young and old. There were those who were born here and spoke a broken Farsi, yet wearing T-shirts with portraits of the boys and our flag. They had gone back to their roots, and I was so proud of them. The Iranian restaurants and stores on the street were offering free food, drinks, and pastries. Green, white, and red-striped flags waved everywhere and horns honked constantly.

The air smelled of back home, of koocheh pass koocheh-haa. I saw my childhood memories in the eyes of those around me. I rejoiced knowing that people in Iran were so happy at that very same moment. And deservedly so. I wondered, once again, about how the boys might be feeling now.

The crowd was tireless. they sang and danced from shortly after the end of the game at two in the afternoon, until midnight. Many streets were closed off. The police surrounding the area watched and wondered in awe.

As I started to head back home, a little before midnight, I walked by one of the policemen. I was told that normally, they don't talk to you under such circumstances. But I said to him: "Thanks for being patient with us." After all, we were celebrating and rejoicing on their turf, in their country. He smiled. I walked away. Then, I heard him calling me. I turned around. Once again he smiled, and said: "Thanks for the kind comment. And congratulations." I nodded and went home.

I thank the boys for all they did, which was truly immense; for all their hard work, for all their dignity, and integrity. I thanked our coach for what he did. I heard myself say: "Merci bacheh-haa for an unforgettable game, for the moments, for the screams, for the glory, for the sweetness of victory. Thank you for giving me a day that I can confidently declare as the happiest day of my life." Thanks for everything.