Written and photographed by Murray Eiland III
March 4, 1998
The Iranian 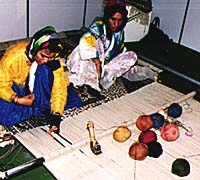 In 1992, as I was headed to Iran for the first time, I met another American on the plane to Frankfurt, where I would get on an Iran Air plane to Tehran. He expressed surprise that I was going to Iran, and was even more surprised to learn that I was going to give a paper at a conference on Oriental carpets. "Isn't that like selling bricks to Manchester!" he exclaimed. I reflected, in a sense it was.

Iran has long been known as a major producer of handwoven carpets. Since the oriental rug established a strong presence in the West, well over a century ago, the term "Persian carpet" has become a general term that could be applied to certain Turkish, Central Asian, or Indian rigs. The industry was initially promoted by the late nineteenth century Persian government as a means of ensuring a sustainable source of finance to allow the importation of Western luxuries.

Today it plays a similar role. Hand-made carpets are Iran's second largest export, after oil, and some eight million Iranians, among a total population of approximately sixty million, earn their livelihood - totally or partially - in the carpet industry. With such a long and distinguished history of carpet-making, why does Iran need foreigners at a carpet conference?

When the Export Center of Iran decided to sponsor annual conferences on carpets, there was no question that there were a number of motives. The first was to promote interaction between experts in various disciplines to address topics of importance to Iranian carpets. This could range from a discussion of designs, to surveys of the modern market. Given the unique location of the conference, coupled with opportunities for interactions with a number of Iranian carpet experts, the conferences have become something of an academic fixture. Many antique Iranian rugs are in Western museums and private collections. It is important for Westerners never to lose sight of where they were made.

At the same time, there is considerable Western interest in new Iranian rugs. European countries can import Iranian rugs without restrictions, and there is a vast trade in Iranian rugs there. One quickly appreciates that the motives for holding such a conference run deeper than simply encouraging academic interchange on art-historical topics. Clearly Iran wishes to expand its carpet exports, and - because of the current embargo on Iranian handicrafts - the United States is now a major untapped market.

Not surprisingly, the 1992 conference, by far the largest, began with a clear but unstated emphasis on American participation. It seemed at the time, and in retrospect, as though an opening were being provided for the American government to make a response to an apparent act of conciliation. As a delegate at four of the six conferences that have occurred since then, I have been well placed to observe the subtle shifts in Iranian attitudes during this period.

A theme that has run throughout all the conferences is competition. There are a number of carpet producing countries in the world, and it is a very volatile market. In 1980 Iran captured 40% of the market. In 1985, with political difficulties at home, Iran had only a 16% share, with India taking the lead. In 1992 Iran maintained 28.6% of the market. If Iranian production falls, the slack will be taken up by other nations. Particularly threatening are hand woven carpets from China. Can Iran compete?

While Persian carpets still carry a mystique, the underutilized labor potential of China, India, and Pakistan could overwhelm Iranian products. Europe is the largest single market for carpets, importing about 1.2 billion dollars of rugs, with some 62% from Iran.

The current embargo prevents an accurate assessment of how many Iranian carpets are imported into the United States, but some rug dealers continue to sell new Iranian carpets. Many Iranian firms based both in Iran and Europe offer to ship Iranian rugs to America with false tags that give a different country of origin. Some Iranian rugs are imported into the U.S. from Canada. Most American dealers, unwilling to risk their businesses, rely upon Chinese or Turkish hand made rugs.

As a response to the American demand for "Persian" rugs, rugs from other countries with Iranian designs are flooding the market. A trip to a large department store such as Macy's is a good example. Many of the "Persian" rugs here are from China, India, and Pakistan. Rumania is also emerging as a producer. If Iran does not enter the market and adapt to the needs of the American consumer, rugs from these other countries may already "fill the Persian niche."

There are also other factors that are important to the Iranian government. One of the most serious is population shifts from rural regions to the cities, particularly Tehran. Young families in particular understand that their economic future in the villages is limited. They recognize that unskilled jobs are available in the larger cities, and they often move there with little thought of what awaits them. This has occurred to a greater or lesser extent for centuries, but it was noted to increase in the 1970s, and has only accelerated with time.

Most governments are unable to alter such population movements, and others have adopted authoritarian means of preventing it. In Iran one of the government strategies involves the carpet industry, which can help stop the exodus to the cities by providing carpet-related employment in rural areas and keeping the pressure off major cities. At the same time the government realizes the importance of education. Information from the Carpet Institute in Tehran shows that a major education effort has been directed toward improving the quality of carpet production and providing career opportunities.

There are four universities in Iran which offer a B.A. in carpet studies: Kashan University, Sahande Tabriz University, Sistan (Zahedi) University, and Pardis Isfahan University. These carpet courses allow specialties in design, dyeing, weaving, finishing, and other types of handmade floor covering. For the last several years there have been about 25 students of carpet studies in each of these universities. In addition the Ministry of Construction Jihad has established eight educational centers in eight provinces since 1995.

The government-operated Iran Carpet Company now provides throughout the nation 20 carpet high schools, nineteen of which are allotted to women. Clearly the Iranians intend to remain heavily invested in the carpet business. The relatively recent addition of carpet studies suggests that they are serious about expanding their share of the market at a time when competition from other nations is making the market increasingly competitive.

Iran is also launching central planning. In 1997 it was announced that a new government committee was formed to set standards of carpet production. Dyes and quality of weave will be regulated, and at some point special tags will be placed on rugs that give assurances of quality. Since Iran is not able to compete with more populous countries in production capacity, quality will be stressed. As this is a hallmark of the Iranian carpet, it is important to protect this reputation. The new committee will also be responsible for collecting data on the needs of foreign markets, so that they can direct the production of appropriate goods. It is for the latter reason that Iran needs foreigners at carpet conferences.

In the 1920s and 1930s in particular, joint Iranian/American firms produced rugs specifically targeted at the American market. With sizes and designs suited to American taste, these rugs were very popular, and were a highly marketable export. Is the past an indication of the future? American and Iranian carpet dealers eagerly await political developments between their two countries.

Dr. Murray Eiland III is an archaeologist specializing in ancient Iran, with a serious interest in textiles. The book "Oriental Rugs: A Complete Guide" (Published by Calmann & King Ltd., London) co-written with Murray Eiland Jr. will be published in late 1998. (Back to top)

* The Lion -- An enduring symbol of majesty and power woven into Persian rugs. By Parviz Tanavoli

* THE IRANIAN Features section
* Bookstore
* Cover stories
* Who's who