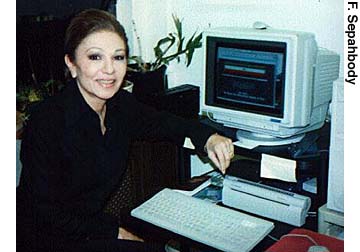 Farah Pahlavi surfing the Net on a Mac, thank you.

From empress to net surfer

A few days back I was in New York. Between the United Nations and other places, this white-haired ex-Iranian diplomat turned reporter had the occasion of a brief encounter with Farah Pahlavi in her two-room diminutive office in Manhattan.

No Damavand or Alborz mountains panorama from that location; just dull grey clouds rolling and a lot of concrete and windows. Nevertheless, I found myself surrounded with splendid heart-warming posters of Iran, one for each province; they cheered me up but made me homesick at the same time. The lovely former empress asked me to look at her computer -- a 166 Mhz Macintosh.

"What! You type it yourself?" I asked.

"And why not?" she answered. That was a far cry from the past when she was surrounded by many secretaries.

"You know," she continued. "I like surfing the Net and look at all the Iranian sites. The many opinions of my compatriots interest me most."

"Have you ever thought of having a homepage on the Internet?" I asked.

"Maybe one of these days, but I understand it's rather difficult."

"A breeze," I answered. "It's the content that's important."

"We shall see," she said and examined her bookmarks. "We like football in the family," she said. "Let's look at the latest news about our team. I hope they'll do fine at the World Cup in France."

Lo and behold, the Sportestan site appeared in full glory and then a photo of Ali Daie.

"I like this site. Besides the youth are Iran's future," she said. Then she went on to other Persian sites.

I snapped my little Pentax from my pocket. "Can I take a photo of Your Majesty at the computer?"

"Of course," she answered.

"May I also have a copy of the Noruz message?"

"As soon as it's finished. There's so much I want to say in just one page, and Iran, the whole of Iran, is always in my heart. I wish all my compatriots much happiness on this Noruz."

Hmmm... I felt like I was asking too much. But then we had tea and cookies. We spoke a bit about Iran and current international affairs. She gave me a copy of a recent interview she had with a Spanish newspaper in which she had remarked: "Embargos serve no purpose at all, because eventually they always end up causing prejudice to the people and affecting the supply of basic items for children and the sick." As an Iranian and patriot can one think otherwise?

To me, after so many years, she appeared very capable of carrying her share of the burden, whether it was as Empress of Iran -- once upon a time -- or now as simple but still highly active Farah Pahlavi in sorrowful exile.

Farhad Sepahbody, Iran's last ambassador to Morocco before the fall of the monarchy, is a freelance journalist writing for French news organizations. He lives in Arizona. Click here to go to his web site. (Back to top)